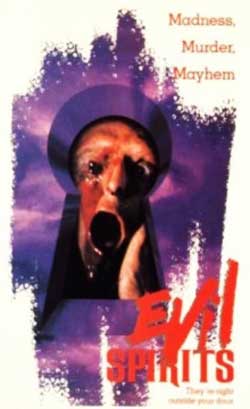 A strange woman runs a boardinghouse whose tenants–mostly misfits and others who won’t be missed–begin dying off or simply disappearing. She still cashes their government benefit checks even after they’re gone, and it turns out that disappearing tenants aren’t the only weird things that are going on in that house

You know you’re going to be in for a wacky time when the first company logo you see on the screen is “Cheesy Pictures.” Add to that a kill in the first five or so seconds and you instantly get the feeling that you’re going to be in good hands. Evil Spirits is a fun film that, while never taking itself seriously, manages to deliver the basic horror goods.

Karen Black stars as Ella Purdy, a slightly off-kilter woman who runs a boarding house. She instantly welcomes in any boarder whom society has forgotten or swept under the rug, mainly the old, crazy or drunk. Like any good horror movie, this allows for a wide range of characters. You have the crazed writer (played by horror fave Michael Berryman), the constant drunk, Tina the mute ballerina, a medium and an elderly couple who has just arrived.

If you would like to join this crazy ensemble of characters all you have to do is sign either your monthly social security or welfare checks over to Mrs. Purdy. She’ll take care of all the rest and that includes the cooking and cleaning. If you need, she’ll give you some of your money for expenses but really, you probably won’t be around long enough to worry about such trivial matters. Sounds like the most idyllic place to live, doesn’t it?

Mrs. Wilson (played by the ever lovely Virginia Mayo) doesn’t think so. She and her recently retired husband have just signed a month contract with Mrs. Purdy, and boy do they want out right away. Mrs. Wilson has a bad feeling about the place. It doesn’t help that on their first night the medium wants to hold a séance to try and reach out to the spirit of a recently departed member of the boarding house. In a classic line Willie, the drunk, proclaims that he would “rather drink ‘em” when asked about seeing spirits. 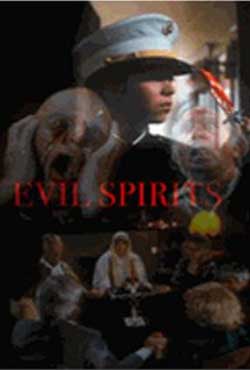 Clearly something is amiss, and it isn’t long before Lester Potts, a worker for the Social Security office, comes calling. He would love to find out just what the d*ckens is going in that house. Even the neighbors are starting to wonder about the smell that is coming from the backyard. And what to make of the wheelchair-bound Mr. Purdy, who loves to sit in his room and make cracks about the guests. How come we never really see him? And don’t even ask about what might be going on down in the basement.

Evil Spirits is a fun horror film that will especially appeal to those who love their horror movies right out of the eighties (this was 1990 so pretty darn close). You have your cheesy, relatively straightforward plot, numerous kills and of course your gratuitous nudity (supplied by horror veteran Debra Lamb). The pacing moves along relatively brisk although the film feels about 10 minutes too long. The ending actually does contain a twist I didn’t see coming which was nice.

The acting is standard for this type of fare. You can tell Karen Black is having a field day as Ella Purdy. With her maniacal laugh and kooky twinkle in the eye, you can tell she’s just not all there. Arte Johnson is solid as Lester Potts, the man whose curiosity just might get the best of him. Michael Berryman is good as Mr. Balzac, a tortured writer whose favorite pastimes are eating and spying on his fellow boarders. 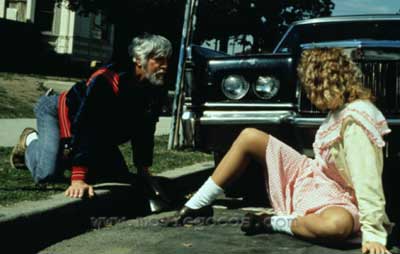 The special effects are good but not outstanding. The kills aren’t all that varied but there is enough to go around. The gore is kept on the lighter side but there is still enough to satisfy. This is one of those movies to catch once, especially if you are a horror child of the eighties, or just love the movies of that time. While not overly memorable, Evil Spirits will keep you entertained and isn’t that the goal of a cheesy horror picture after all?