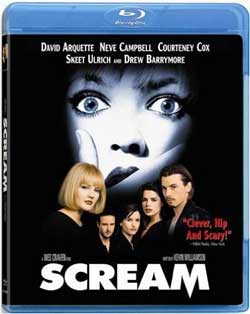 Horror maven Wes Craven — paying homage to teen horror classics such as Halloween and Prom Night — turns the genre on its head with this tale of a murderer who terrorizes hapless high schooler Sidney Prescott (Neve Campbell) by offing everyone she knows. Not your average slasher flick, Scream distinguishes itself with a self-parodying sense of humor. Courteney Cox and David Arquette co-star as a local news reporter and a small-town deputy.

Hello, people. This film, I believe is loosely based on Are You in the House Alone? If you watch the two together there are similarities to be found. I won’t spoil them for you, but watch the two back to back and see for yourself. Look for the line, “Are you alone in the House?” The original title of this film was Scary Movie (which was later taken and used by the HORRID Comedy Horror spoof). Later, the film was altered into the title it’s known for now… Scream.

This is the franchise that put a twist ending on the original and have stuck with the blueprint every since. Some of you may know what that is… For those who do not, rest assured… There are no spoilers here.

The film is written by Kevin Williamson. He is also the writer of Dawson’s Creek and I know What You Did Last Summer. Interesting side note, he is also an avid West Memphis Three Supporter (such as myself, right on, Kev. “Free the Three!”… www.wm3.org). Collaborating with Williamson is one of the “Master of modern Horror,” Wes Craven. He made such classics and cult classics, such as The Last House on the Left, A Nightmare on Elm Street, Shocker and The Hills Have Eyes… and countless others.

The dialog is quirky at times and quite amusing when talking about such serious subject matter… such as murder. The actor for virgin watchers that they just know will survive does not. This sends the viewer for a trick question and into the twisted ride of dark mayhem and witty humor that is spiced throughout this mystery/ Horror/ somewhat comedy.

One can form a drinking game and get absolutely hammered, smashed and sh*t faced with each time a Horror movie reference is mentioned. Films such as The Exorcist, The Town That Dreaded Sundown (the film that introduced me to Horror at a year old), Candyman, Psycho, Halloween, Friday the 13th, Terrortrain, Hellraiser,The Howling and even A Nightmare on Elm Street are paid tribute in this film.

They are summed up with the term “Wes… Carpenter flick.” In a way, it makes the horrific situation all the more realistic. The group of friends are like your town teenagers. Partying, mocking the dead and trying to figure out who is knocking them off, one by one. Updated (for the time of release) versions of Don’t Fear the Reaper (Blue Oyster Cult) and School’s Out (Alice Cooper) are also present.

The acting is superb throughout the feature. Each character has their own personality and as the series progresses, you kind of start to miss them as they are brutally murdered… but it’s fun to watch them die. The ghost face mask (known in stores as its original title, Father Death) is seen throughout not only on the killer, but others as well. The horrific situation is later publicized into a book and feature film and the mask is all over the place, taunting the hero(ine?) throughout the series.

The pacing is almost at a breakneck speed and the jump scares are spiced throughout in jolting and twisted deliveries. The whirlpool of mystery, Horror and humor leaves the virgin eyes guessing until the very end. This mixture of substance makes for a violently fun ride with very memorable characters.

The gore score is an impressive nine. There are graphic throat slittings, guttings and some violent gun blasts as well. Plus a few more creative treats of atrocity wait behind every door and around every corner. There is subtle torture and taunting added to keep the tension on a high level. Although Black Christmas, Are You in the House Alone and When a Stranger Calls have used the main method of sadistic taunting, this modern day thriller adds something a little different on an old gag. This adds something special once the entire puzzle is put together.

A part four has been made and rejected by a different company. I own a copy and it is horrible. The mask and main characters are taken away. Luckily, Wes and Kevin are said to be teaming up again for a forth installment. That should be interesting. They all have been thus far. You can purchase a four disc box set with all three installments out so far and an extra DVD full of extras. There is also a special booklet included. Trailers, interviews, behind the scenes and much more are included on the forth disc. Commentaries by various contributors are on parts one, two and three.

All in all, not only am I a fan of the original, but I’m a fan of the entire series (part four needs to throw in The West Memphis Three, if someone of importance reads this). They all stay intact with one another and do not stray off of the main path of the core cast or plot as most series tend to have done over the years. It’s almost as if you’re reading a novel and get so in love and involved with the characters and then “BWIGAH,” They’re dead. Awesome. I give this film, Scream, FOUR HORNS UP.