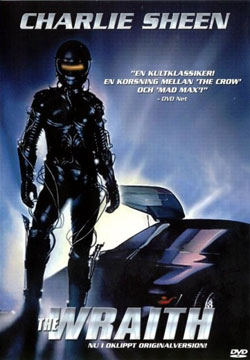 Packard Walsh and his motorized gang control and terrorize an Arizona desert town where they force drivers to drag-race so they can ‘win’ their vehicles. After Walsh beats the decent teenager Jamie Hankins to death after finding him with his girlfriend, a mysterious power creates Jake Kesey, an extremely cool motor-biker who has a car which is invincible. Jake befriends Jamie’s girlfriend Keri Johnson, takes Jamie’s sweet brother Bill under his wing and manages what Sheriff Loomis couldn’t; eliminate Packard’s criminal gang the hard way…

You just cant help but love a film like “The Wraith” It’s soooo 1980’s that if you are just picking up the new re-release of the film now, it will soon put a smile on your face. Yes, all those common elements we have come to love. A bully, a gang, a bully who controls the gang who all happen to dress up like punk rockers, a damsel or rather claimed prize, a new kid in town played by Charlie Sheen who takes an interest in said damsel (a rather young Charlie Sheen), fast cars, horror elements and even a burger stand. Sweeet deal!

If you take a gander at the IMDB listing it lists the following genres: Action, Horror, Thriller, SCi-FI, Romance……. everything except cowboy western! This is one of those titles that has seemed to get lost in the …lets put it on DVD list. While it did appear in a few crank em out independent releases…it really hasn’t seen justice till this release by Lionsgate. Maybe a retro film starring Sheen was just too much to pass up. Hey now, let’s not forget the lovely Sherilyn Fenn who is looking all that and more in this release. Randy Quaid is onboard as Sheriff Loomis and the funniest looking role has to go to Clint Howard who plays Rug head sporting the ugliest fro-mop this side of Cameo.

Now the bully Packard Walsh played by Nick Cassavetes fits all the makings of an stereotypical 80s bully. In fact he seems to have a car racket going by forcing cars to race him for titles and then claiming the vehicles after cheating. His band of punked out misfit toys who go by names like Oggi, Gutter boy, and Skank are there to back him up if all doesn’t go as planned. Too bad he pissed of the wrong soul who has come back from beyond to seek retribution. Packard also has an obsession with his girlfriend Keri who seems to want to have nothing to do with him. Well cool mild mannered Charlie Sheen aka Jake Kessey doesn’t let that bother him as he takes a rather quick liking to the hot smoking Keri.

Can you see the 80’s scenarios already playing out yet?? A back story is discovered that involves Keri’s former boyfriend being murdered by unknown attackers. Somehow this notion and the new mystery race car driver have a direct relationship on the events to follow. As more race to death occurrences happen we get a glimpse of more of the supernatural elements that relate to the car and its driver.

Loomis does his best to keep on top of things but is spooked when the deceased car victims turn up in tact except for their eyes burned out. As more of the gang get offed one by one it’s apparent that Packard is the target of what they are calling a “wraith”. All of course leading to an eventual showdown of man, ghost and machines.

Keri in the meantime develops a relationship with newcomer Jake who also empowers her with the strength to stand up to Packard. It all works like clockwork in the same style and feel that several of these plotlines played out in the film genres of that time. This time though, it’s got enough killings I suppose to also put it into the horror genre category.

The Wraith directed by Mike Marvin is good fun. It is molded into similar plotlines as films from that era such as Savage Streets, Tuff Turf, and well maybe even a touch of Valley Girl. It’s era makes it a classic by default but it also stands as one of the more remembered…”where didthat movie go” films as well. The extras provide a commentary and interview with the present day Clint Howard who talks on his role as “rug head” and the fun he had on set. The recent release looks good and is chock full of 80s metal tracks thru and thru. Not to mention the essentials…..a hero, a bully, a damsel, fast cars and ….a ghost. What more could you ask for?

Just for record keeping the IMDB page contains some pretty good trivia facts about the film.

The black car featured in the movie was a real-life technological wonder, the Dodge M4S. A joint effort of the Dodge Division of Chrysler Motors and PPG Industries, one of the highly sophisticated PPG Pace Cars for the PPG-CART Indy Car World Series. The M4S was designed and constructed at an estimated cost of $1.5 million, and featured performance and technology to match that lofty figure. The innovative body design was developed in the Chrysler studios, while PPG developed the finish – a special bronze pearl paint job formulated just for this car. The M4S was powered by a Chrysler 2.2-liter four-cylinder one-of-a-kind engine that exceeded 194 mph. According to ‘Gary Hellerstein’, transportation coordinator for this film, a total of seven versions of the M4S were needed for filming. The original, on loan from Dodge, was used for close-ups and details. Two more “drivers”, consisting of perfectly detailed bodies on dune buggy chassis, were used for stunt driving chores. There were four “shells”, empty bodies on bare, towable frames, that were sacrificed in various crash scenes.

While filming a chase sequence shot on a mountainside outside of Tuscon, a crew member was killed and another was critically injured.

Dedicated to the memory of Bruce Ingram, who worked on the film as an assistant cameraman.

Packard Walsh drove a late-1970s Chevrolet Corvette with a custom paint job and nose clip; Oggie drove a 1986 Dodge Daytona Turbo Z; Minty drove a 1977 Pontiac Firebird with a highly-visible (but apparently non-functional) supercharger; Skank and Gutterboy drove a beat-up 1966 Plymouth Barracuda; Rughead was driving a late-70’s Chevrolet pickup. The couple who are cheated out of their car in the first race were driving a 1987 Dodge Daytona Shelby Z (distinguished by its’ pop-up headlights, unlike the exposed headlights of Oggie’s 1986 model). The police drove a variety of mid-1980’s Plymouth Caravelles and Gran Furys, as well as early-1980’s Chevrolet Malibus; Sheriff Loomis drove a “civilian” Plymouth Caravelle.