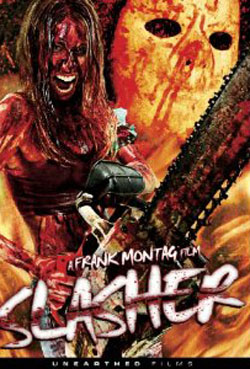 When sexy psychology student Erin (Christiane Imdahl) hits the breaking point with school, she rounds up a bunch of friends, and they head into the woods where they party the weekend away — until a chainsaw-wielding maniac begins hunting them down one by one. Now fighting for their lives, the pals must also confront sinister secrets from their past. Frank W. Montag directs this German grindhouse flick.

The characteristics of a slasher flick usually come with a good healthy mixture of blood, gore, sex, drugs, and alcohol. This is definitely the case in Frank W. Montag’s Slasher, which is portrayed on the DVD’s front cover as being a blood-soaked slasher flick with a scantily clad woman yielding a chainsaw. This German splatter flick pays tribute to the 80’s slasher flick, with plot twists that attempt to stray away to a generic storyline.

The movie starts with two sex-craved young adults, out in the woods and immediately killed brutally. A young student is then shown in her class, and is uninterested in her Psychology lecture. Erin(Christiane Imdahl) is convinced to leave by her best friend Julie(Pia De Buhr), and they meet up with their boyfriends, Danny(Christian Stock) and Chris(Michael Eisenburger).

The four decide to go the club where another friend, Tom(Heiko Lange), works as a DJ and they all taunt Tom as he picks up a new girlfriend, Maya(Maja Makowski). The six decide to take a vacation out to the middle of the woods, a prime spot for a deranged killer, Mike(Sebastian Badenburg), to track them down. The couples each set up their own tents, and do the normal camping things as going swimming and telling ghost stories.

Chris just so happens to have a plain white mask that he scares the girls with, and leaves it by the fire. The killer picks it up, and uses it to hide his face just as a true slasher would. After going swimming the next morning, Tom and Maya go away from the other two couples on one of the typical sex escapades, when they find a boarded up cabin in the middle of the woods. Tom is immediately slaughtered by the masked villain, and Maya is soon next. When the remaining couples look for Tom and Maya, they are quickly picked off by Mike and then in a surprising twist Julie takes Erin captive. A sick family history is revealed, as Erin must find a way to be free of her backstabbing best friend and Mike.

Mike’s character has definitive actions that are reminiscing of other slashers in film. He had a mix of Leatherface and Michael Myers that stood out the most, as he voyeuristically watched the young woman in sexual acts before killing them. His weapons of choice were an ax and a chainsaw, in which the chainsaw would get the most bang for your buck with plenty of blood spraying. There were also shots of people being gutted, and blood-soaked bodies lying all over the place. Mike’s character is almost comical at scenes that he cutting random things that do not make sense with his chainsaw, and wearing a Nekromantix shirt under his butcher’s apron.

There is also plenty of nudity in Slasher, accompanied with slow, panning shots of parts of the women actress’s bodies that did not quite make sense, except to give male viewers a chance to score some attractive women shots. From the girls pulling out a wedgie to the taking off their shirts whenever they can, this was definitely a movie directed towards the average male horror fan. The other awkward moment happens when Mike is chasing Erin at the end, and it goes on for two consecutive days. When chase scenes usually only last a few minutes to an hour, Erin’s plight takes almost two days, which is not very believable.

Frank W. Montag’s Slasher is the bloody story of what happens when young adults make the mistake of going on vacation in unfamiliar territory, while being preyed on by a deranged killer. The blood and gore of the movie makes this a perfect movie for fans of intense splatter flicks, and another movie in the history of fun slasher movies.