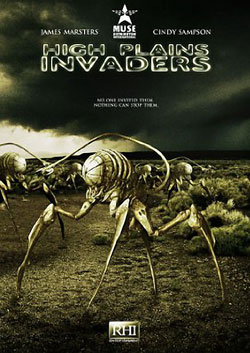 In the early 20th century, aliens of the giant metallic insect variety invade a remote Western mining town in a mission to find enough uranium to fuel their spaceship. Retired outlaw Sam Danville (James Marsters) leads a motley band against the menace. For the human survivors, the mystery of what these nightmarish invaders really are — and what exactly they want — is just the beginning of their problems.

What do you get when you combine an old frontier town with modern looking alien-like earth creatures? If you guessed “High plains Invaders” your in the right review.

Director Kristoffer Tabori and writer Richard Beattie have a soft spot for Sci-Fi westerns which is obvious in this fantastical and yet absurd ode to the intertwining of genres. Though let’s not forget that there is still enough blood shed, SYFY channel gore in this to keep its alien head in the horror genre as well. Speaking of horror …James Marsters former Buffy star “Spike” is on board in a lead role. Though looking better without the whiteface.

The creatures which are no mystery sported on advertisements and covers…. are pretty cool looking on the quick. And yet somehow they still echo the features from distant cousins such as “Pitch Black” and “Starship Troopers”. When they first appear, I admit I was impressed on the CGI integration superimposing enough that they stand among other sci fi features pretty equally. I think my first thought though was….. these remind me of those microscopic creatures that invade our beds in science documentaries. Exceptions being that these stand towering over the locals like dinosaur insects who happened to breed with scorpions along the way. Well as a film… it starts to get closer to scifi than anything.

The creatures emerge from underground and are multiplied by way of spaceship drop offs. Besides being crablike, eel-like and scorpion-like they are able to put there front legs together to make them into a makeshift drill that enables them to burrow quickly underground. Oh ya, if that’s not enough, they possess the ability to shoot! Yep out of their scorpion tale like an old western gun fighter…..or, uh such.

The townspeople…the ones that are still alive, that is…. are headed by Sam Danville (James Marsters), a train robber convicted felon who was just about to get a good old hanging until interrupted by an alien invasion. Let’s see, there’s Rose Hilridge (Sanny Van Heteren)…a tough lady bounty hunter who’s focal point seems to be collecting awards, regardless of alien invasion, a town of dead folks or being in threat of her life. Cindy Sampson is Abigail Pixley, who had a former romance with Sam and has never quite gotten over it.

Add to that a hand full of other townsfolk including the surveyor scientist who believes he caused the alien invasion due to mining for Uranium. Where does it all go? as typical in these type films, the townsfolk shack up, plan, attack, die, regroup and fight for survival. Somehow they get it on there minds that this is far better than just trying to find better ways of getting out of town. You can expect a certain among of character drama and change of character roles as good guys become bad….bad guys become good…that sort of stuff. Oh ya, the CGI team was working overtime on this one as these bug things show up quite a bit to annoy and slay.

The film was originally a SyFy channel release which in my mind start to look alot the same after awhile. It’s a good Saturday afternoon type of film but it wont win any horror category awards. Marsters stays within character and holds his own pretty good in this b-grade thriller. We review alot of these films especially from the Syfy rollover release and they are all somewhat entertaining to watch. This film roles into the “Man-eater” series category which are all included as long as they have some sort of creature, animal or monster focus. I lost count but it seems like there about 20 of these in the series. I’d love to see a complete set of these offered for some of the reasons mentioned before …though take them all with a grain of salt much like you would have in the old days of big monster films such as Godzilla and Mothra. 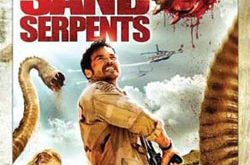 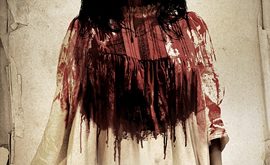 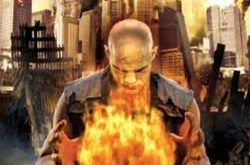