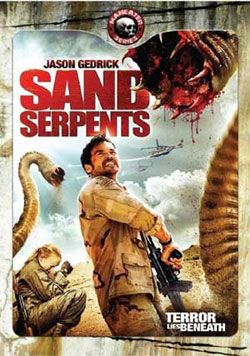 While carrying out a combat mission overseas, an elite group of soldiers (led by Jason Gedrick) comes face to face with the Taliban — and a deadly underground network of giant serpents that make their home in the hot desert sand. The soldiers catch a break when the serpents cleanly devour their terrorist captors. But the minute they’re set free, they jump headfirst into a hard-fought battle for their lives.

QUICK FIX:
In this Sci-Fi Channel original movie, a platoon of American Special Forces soldiers on a G-14 Classified mission become trapped in the Afghanistan desert by a crafty & ruthless group of Taliban. About to be executed by the enemy, they’re miraculously saved at the last second by what turns out to be a much bigger problem than those nutty Taliban bastards – seems the Graboids of Perfection, NV, and the Sandworms of Saturn, have a distant cousin living under the ground over in the Middle East, and all that combat going on over there has awakened the hungry critters. Or something like that. Ah, yes…sh*t by any other name is still known as SyFy Saturdays!!

RAMBLINGS:
Almost every Saturday night for the last 5 out of her almost 8 years on this planet, my daughter and I nuke the pizza rolls, pop the popcorn, ice down the beer and Dr. Pepper, and kick back on the sofa downstairs in the ManCave™ awaiting the latest premiere of schlocky fun on the now-known-as “SyFy” Channel. My wife and son don’t really care that much about it, but it seems that I wound up producing a future Scream Queen from my loins, so for her and I it has become not only a ritual, but a now long-standing tradition. And based on the commercials we’d been seeing all day leading up to its premiere, we were really looking forward to this one.

But it didn’t take long to realize that we’d gotten our hopes up a little too soon, and I was still fine with that. Because after all, I’ve actually made it all the way through everything from THE SNAKE KING to CERBERUS to WARBIRDS, and did it with a smile. Usually though, as in this case as well, the smile was not one of happy ignorant bliss, but of irony. As in, wow, yet another week that I fell for their sh*t again. I’m not going to say it’s all bad…the plot never gets more complex than mentioned above, although there is assistance provided to the troops along their quest for survival by an Afghan refugee who may or may not have nefarious intent. I say “may or may not” not to shield you from any spoilers, just simply because I don’t know…the movie never really answered that question. Didn’t have time for that – people were either getting blown up, eaten, or more often than not – talky talky talky.

But now, you may or may not ask….the worms? What about the worms?? Well, imagine that you’re running away, driving away, whatever, from whatever’s chasing you from under the ground. It suddenly pops up out poised, ready to strike, and you stop and say to yourself, “What the f*ck am I doing running away from a giant dryer vent hose with teeth???” I understand though – surely the filmmakers didn’t want endless references to TREMORS, DUNE, or for that matter even BEETLEJUICE, so they designed things a little bit….differently. The effects were actually pretty decent for a SyFy Channel Original though, and they damn well should have been…about all they had to spend on set design was a few burned out buildings, renting a chopper for interior shots, and the sands of Romania (or was it Bulgaria?) doubling for the scorching desert of Afghanistan.

Jason Gedrick (never say die, IRON EAGLE!!) headlined this miscast (whoops) as the platoon leader, and did what he could with the material he had without ever really rising above it. Everyone else played every stock Armed Forces movie stereotype that’s been thrown into every sh*tty movie containing stock Armed Forces stereotypes for the last couple of decades – the most recent big budget offender that comes to mind are the National Guard folks from THE HILLS HAVE EYES, PART 2 remake from a couple of years ago… not quite as annoying here, but let’s just say they come really close to stealing the crown.

LAST WORDS:
If you’re a truly devoted fan of schlock and can’t resist, then by all means check it out. If you aren’t, then save your valuable time and money. For those of you keeping your fingers crossed that this might be somewhere along the lines of TREMORS 5: THE WAR ON TERROR, well…you can uncross your fingers now and go back to your World of Warcraft games, cuz that ain’t what you get here. It’s actually one of the few SyFy premieres that we got over the course of last summer that didn’t completely suck hot frosted goat balls, but it also fell victim to what so many other lower budgeted creature flicks of the last few years have, which is the old “more talk, less monster” ploy. And if you as filmmakers are going to go that route, like so many others have lately to save money, then you damn well better have more interesting or at least semi-entertaining subplots and/or dialogue going on in between. 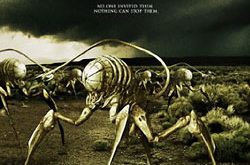 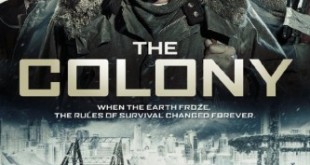