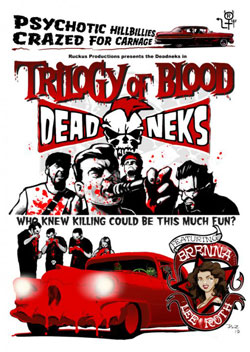 SEE the BLOOD! FEEL the TERROR! HEAR the PSYCHOBILLY SICKNESS!!!! Experience the sensory TRIPLE-SKULL-FUCK that is…TRILOGY OF BLOOD!!!!!!!! When a trio of sexy city gals picks up a broken-down hillbilly in the backwoods of Virginia – the three kittens get A LOT more than they bargained for when they accept the drifter’s invitation to a down-home barbecue. What these lovely ladies don’t know just may hurt ‘em – when they find that the menu of this hayseed hoe-down isn’t the standard ‘burgers and dogs’… Shot on-location by Ruckus Productions in the hills of Virginia with an estimated budget of roughly 62 dollars – TRILOGY OF BLOOD is a grindhouse gore-fest combining old-school drive-in horror, with three (count ‘em – THREE!!!) rowdy performances by the grittiest psychobilly act this side of Pleasant Valley!!!

Starring Brenna Roth (B-movie starlet and daughter of legendary rocker David Lee Roth), and psychobilly sickos THE DEADNEKS – TRILOGY OF BLOOD is a carnage-crazed feast for the eyes and ears of hell-raisin’ Psycho Rock-and-Roll and 70’s exploitation-style cinematic madness!!! If you see only one triple-music-video-slash-southern-fried-horror-film this century – grab your vomit-bags and earplugs, and treat yourself to a…TRILOGY OF BLOOD!!!!!!!!

Wooweh! – something smells good down on the farm. Must be some of that down home barbeque we’ve been hearing about? “Trilogy of Blood” though the title may be deceiving is actually 1 short film. The film is highlighted with 3 rowdy good ol rock and roll performances by the boys from “Dead Neks”. This 25 minute short is actually done pretty cleverly to showcase a band and give us some quick and dirty horror to boot.

3 young girls on their way cross country decide to pick up a local hitchhiker. The 3 girls include Brenna Lee Roth as Marilyn, Tisha Gardener as Connie and Elysegirl as Sherry. The hitchhiker offers them a night of partying and music at his barn band rally. Reluctant, they accept and come upon a party in progress. The hitchhiker grabs the Mike and the Dead neks go to town. As the music progresses, each girl eventually gets taken by surprise, killed and then carved up for the nights festivities. Yep, barbeque is on the menu, but its done this time cannibal style. The partygoers, band and locals feast out on the ignorant travelers to their hearts content.

The movie is produced by Ruckus productions and directed by Rick Kelley & Charlie Ruckus. The edit has a heavy helping of grindhouse grit overlay that stays on pretty hard start to finish. Though the treatment really works for the tone and style of this film probably much better than it would have without it.

The country scenery combined draws you into a classic Texas chainsaw feeling that keeps the flow nicely together. Violence is pretty much hardcore and direct. No real build up or reasoning, we just assume they are killers and that’s what they do. The FX are basic and chop edited in, though as the synopsis says…the film had a budget of 62 dollars. My meal last night totaled more than that, so not bad….not bad at all.

These guys have fun with it, don’t take themselves too seriously and present this short with a cool party atmosphere. The music is driving and lays a nice foundation of backing music to the whole project. Oh, ya, if you stick around you might be educated on the seriousness of farm machinery sex abuse. Good times!