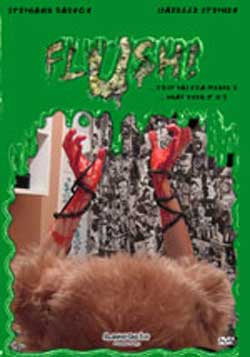 “A small seed will transform with a small amount of water and grow into something extraordinary… but for only one dollar, does it really works??!”

Sometimes great things come in small packages! Never was that more true under the packaging of a small but effective short film sporting the name of “Flush!”. The concept is simple, and really all that the film needs. We open upon some obvious carnage that is being scooped up, wiped up and removed from what we assume was some kind of slaughter fest. Well that may be true but the source of such slaughter is something far more bizarre and novel. This little 20 minute ditty manages to squeeze more low budget animation into its framework than most features I’ve seen.

Our main charter whose life seems to be consumed with the franchise driven circuit of horror novelties and goods…. seems content in surrounding himself with all manners of freaky movie memorabilia. Not much of a stretch from the normal extreme collective nature of horror fans, his Fangoria magazine and Freddy icons are thrown about to the comfort of his interest. Though its a thing from another world ad that catches his eye. When a damaged cardboard box shows up, his attempt at growing a cool monster from a raisin looking nugget appears is left in disappointment when the nugget fails to do anything except sit at the bottom of a glass.

Flush! becomes a premise factor as he does “exactly” that and sends his nugget to the depths of a toilet bowl. But as we have learned from horror films themes, you shouldn’t flush your monster down a drain as it might come back for you.

This is where the action picks up as tentacles start emerging from the toilet to torture, kill and violate a young girl who was just trying to do her business. The FX work shines with a comedically gross overtone that really sells this short piece. Horror fans will love the extreme nature of the animated segments that use just enough old school techniques to pull off a very cool short film.