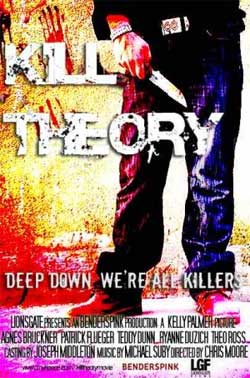 A group of college students visit a secluded vacation home to celebrate their upcoming graduation. The fun doesn’t last long when a sadistic psychopath forces them to participate in his deadly contest. The rules are simple — in order to survive they must kill each other. As tension builds, and relationships begin to crumble, they realize that only one can make it out alive. Could you trust your boyfriend? Your girlfriend? Your best friend? Only one can go home. So who will be the last man or woman standing?

“I am not going to wait for some psycho to ass rape us.”
~Carlos

A mental patient stalks a group of college students to a secluded vacation home. He forces them to play a game of survival. To survive there must be only one of them alive come morning. Secrets reveal themselves and relationships crumble. Friend will turn on friend. Only one will make it out alive. What would you do to survive?

“Kill Theory” follows in “Saw’s” footsteps with someone playing a game with other characters. But in this game you have to kill everyone else if you want to live. If you had to kill your friends to survive would you? Of course if the movie answered that no one would kill their friends for a chance to get out alive there wouldn’t be a movie, so we can guess that the characters will turn on each other. The villain is trying to prove his theory that people will kill each other to survive like he did three years before when he cut the rope with his friends on it during a climbing accident.

The movie was better than I thought it would be. The acting is strong for the most part and pace of the movie keeps the action going and most people will not guess who makes it through the night alive.
The movie starts out a little shaky, with a doctor discharging his patient from a mental hospital. The doctor even putts while having the session. I was waiting for someone to say it was “a dark and stormy night.” There is no surprise or twist on the fact that the patient will go out to show that his theory that all or most would do as he did and kill to survive. The only thing missing is a thunder and lightening storm. Since we don’t get a good look at him you are almost hoping that when the reveal comes it won’t be him but it is.

The “kids” are the strange group that appears in many horror films, three couples and their friend who is the odd man out. Who the hell brings an extra person on what seems like a couple’s weekend? How many guys say “hey I want to watch or hear you all have sex while I am all alone and moping?” They throw in a token girl from the wrong side of the tracks who just happens to show up during the weekend and who only seems to be there to shoot the poor guy down. She just seems to be in the movie to add to the body count. I like Taryn Manning as an actress but they could have given her a better part.

The film surprisingly does not have all the friends turn on each other. The first victim Nicole (Steffi Wickens) refuses to kill her boyfriend Carlos (Theo Rossi), and Michael (Patrick Flueger) tries to do the right thing even when outvoted by the group to leave Carlos to die so they don’t get burned alive. Brent (Teddy Dunn) the doctor’s son is the only one to totally turns to the “darkside” and he was out for himself from the sign of the first trap on. You knew the guy was a bastard from the word go.

I liked how the end played itself out, which I can’t say more without giving all away.

The death by shovel was well done moment in the movie.

Patrick Flueger was always believable as the “good” guy

T he poker through the eye trick.

Alex (Taryn Manning) is just thrown in and doesn’t get much to do. She dies too quickly.

Freddy (Daniel Franzese) really gets annoying after a while. I know it’s the character but if I had to hear him whine anymore I would have killed him myself

Having the bad guy use a video tape to reveal what the game is. How many tapes have we seen in horror movies lately .

“Kill Theory” has a lot to offer as long as you aren’t looking for the most original concept. The acting is good, the script is okay and it is well filmed. The young actors and actresses are attractive. It is too bad it was dumped to Direct to DVD. The movie is a lot better than most of those PG 13 remakes that have been in the theatres. Watch it with some friends and some beer and pop some popcorn. I give it 3 stars. It was released by Lion’s Gate and you can find it on Amazon.com 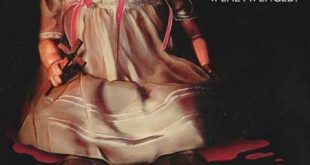 Film Review: Blessed Are the Children (2016) 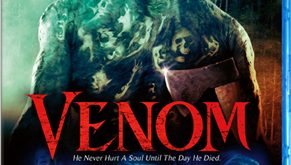