Home | ‘House by the Cemetery’ Reunion!

‘House by the Cemetery’ Reunion! 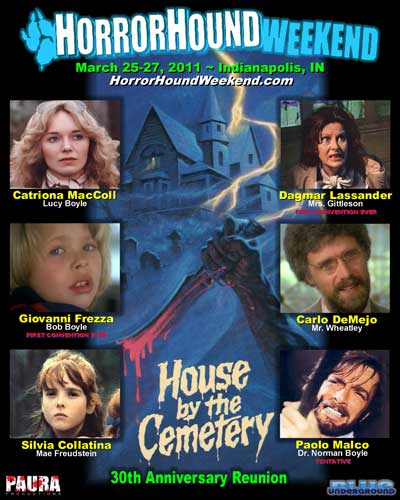 2011 marks the 30th anniversary of Lucio Fulci’s haunted mansion masterwork HOUSE BY THE CEMETERY and to celebrate, HorrorHound Weekend – in conjunction with Paura Productions and Blue Underground – is bringing over the majority of the film’s cast to Indianapolis this March 25-27 for their giant Spring show.

Catriona MacColl (The Beyond, House of Voices), Silvia Collatina (Alligator, Murderock) & Carlo DeMejo (City of the Living Dead, Contamination) will be making their first HorrorHound convention stop, while it will mark debut appearances for Dagmar Lassander (Hatchet for the Honeymoon, The Black Cat), Giovanni Frezza (Demons, The New Barbarians) & Paolo Malco, who is still very TENTATIVE as he is currently working out his busy schedule with RAI television in Rome.

This will be a once-in-a-lifetime opportunity to meet these iconic Italian film stars folks in one place, and you may even make it on-camera as Blue Underground will be filming for this Fall’s Blu-ray edition of HOUSE. So make sure to come prepared and be ready to purchase many exclusive items offered ONLY at HorrorHound Weekend!