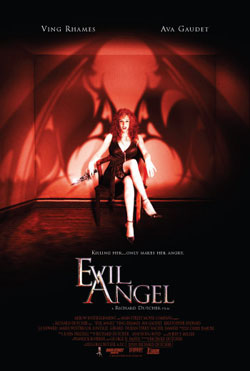 Evil Angel takes the ancient myth of Lilith into the 21st century with a murderously sexy and seductive villainess who, as the earth’s first woman, proudly lays claim to being the world’s first serial killer.

“Jewish mythology describes Lilith as Adam’s first wife in the Garden of Eden,” says writer/director Richard Dutcher. “When she refused to submit to Adam’s authority, God cast her from the garden and replaced her with Eve. This infuriated her, and she’s been taking out her revenge on Adam and Eve’s posterity ever since.”

QUICK FIX:
Using every definition of the word “Mangry” (man-angry; angry at men…you know), Biblical mythology mixes with modern-day thrilling horror as the OG, Triple, Triple OG of crazy bitches known as Lilith who is still, all these centuries later, doing her very best to punish the children of Adam and Eve (that’d be us) through sins of the flesh (hot sex with her) and then through painful, sacrificial death (for us, dammit) before hopping bodies FALLEN style and rampaging after the next unlucky soul. But wait, there’s more…Marsellus Wallace himself is a tough, Mike Hammer-type film-noirish hard-boiled detective hot on the trail of this ancient, seemingly invincible killer.

RAMBLINGS:
Now this is what I’m talking about! Anytime a filmmaker can take an old tale like that and put a modern spin on it, I’m on board! Ok, maybe that statement is a bit hasty, as we’ve all seen cheap and easy flicks following the same kind of formula that looks like they were merely cut and pasted together by no-talent hacks with no real love of filmmaking, right? Right. But in this case, it’s the complete opposite – from the opening credits of a beautiful, naked woman writhing around on a bed to the final frame, I was hooked on this sexy and bloody tale of what is basically a “Where Are They Now?” tale of our world’s very first Madame/serial killer. But in many other ways, she was also our world’s very first feminist.

For those unfamiliar with the original background story, it goes a little something like this – Lilith was Adam’s first wife…you know – Adam – the dude from the Bible…Garden of Eden, big snake, apple, poor choices leading to hot chicks having to wear clothes in public instead of fig leaves, the PMRC, etc…you get the idea. Anyways, it’s presumed that Adam and Lilith led a happy enough life for awhile, except that she wanted to be his equal, not his servant. Then it came time to do the nasty – the horizontal bop, bumping uglies, the hunka-chunka – you know…sex.

According to legend, Adam’s ego got bruised when he couldn’t be the dominant dude on top in the missionary position because she wanted actual foreplay first – maybe have him throw her The Shocker now and then to get a little lubed up, to do it doggy-style, and maybe finish off on top, riding him like a 2nd place horse in the Kentucky Derby. So he threw an emo-style hissy fit, refused her advances, and pouted like a little boy who was denied ice cream on a hot summer day. After that, she said “screw you guys, I’m goin’ home”, rose up into the air, and started boning everything from fallen angels to supposedly becoming Satan’s “one and only” special someone. Since then she’s been associated with birthing everything from Succubi (Succubuses?) to the race of Djinn. And ever since Adam pissed her off, she’s done everything she could possibly think of to take her revenge out on his children. Pretty heavy sh*t there…

I can tell fairly easy by the chances taken here with the storytelling and subject matter itself that this is still an indie horror film. But damned if it looks like one – honestly. Writer/director Dutcher has not only surrounded himself with a talented cast – some newcomers, some vets; but also with many talented vets behind the camera as well, giving this the grand look and feel (especially the demonic/possessed FX) of a Hollyweird project with a ton of money behind it. Impressive…very impressive, to say the least.

LAST WORDS:
It takes a lot of guts these days to put out a two-hour long horror movie. It also takes a hell of a good story, good FX, great acting, and gorgeous naked women spread throughout said two-hour long movie (of ANY genre) to actually hold my attention for anywhere near that long. I’m happy to report that EVIL ANGEL is that movie. This one stands apart from most other indie horror (and especially Hollyweird horror) flicks that I’ve seen in a long time, as we have the gritty yet polished look, the blood, the sex, the story, the talent, and thank the heavens it’s not a remake. I haven’t been able to find a release date on this sucker yet, but it’s been winning the sh*t out of festival awards all over the globe from the looks of things, so keep your eyes peeled for this one – it is very worthy of being in your DVD collection. And suddenly, the lyrics to the Buckcherry song “Crazy Bitch” have a whole new meaning to me…. 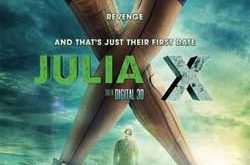