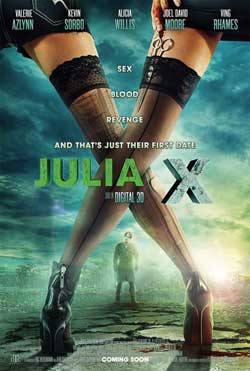 Meeting a man on the Internet, Julia decides to see him in person, only to get abducted and branded with the letter “x” by that guy. A game of cat and mouse follows, but the story has an unexpected twist.

Hercules and Captain of the Andromeda himself sold me on Julia X right out the gate. Why? I don’t know… It’s Kevin Sorbo. He’s out with a hottie way too young for him but she winds up bailing on the poor guy after having a waking dream of them getting frisky in the bathroom. It’s apparent she has the hots for the guy but doesn’t want to commit and runs away. It looks promising though when she makes a phone call to a friend to tell them he may be “the one” – that makes you feel warm and fuzzy and hopeful for the future between them… until he garotes her in the car with a piano wire and takes the poor girl hostage! Bad Hercules! Bad! Immediately you just know that, in the end, it simply won’t work out for these two crazy kids. 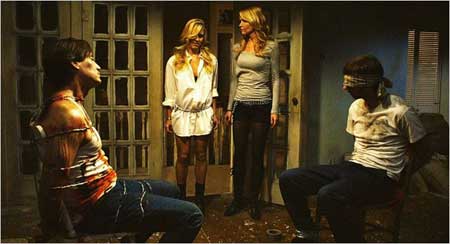 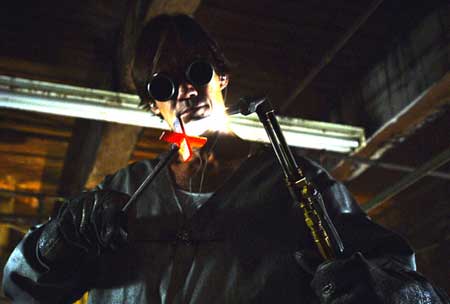 In Julia X our normally nice guy Kevin Sorbo plays something completely different than what we expect… a serial killer… who likes The Carpenters! Kevin Sorbo does an excellent job playing a psychopath and we really get to see his many facets as an actor and just how good he is. Unfortunately for Hercules his young prey, Julia, escapes into his warehouse of torture. The panicked young woman runs for her life but that does not last long for our heroine. Cornered, trapped, and knocked hella out she gets tossed inside of a pedophile van and branded with an “X”. As fate would have it she would get a second opportunity to escape effectively exasperating our friendly neighborhood psychopath. 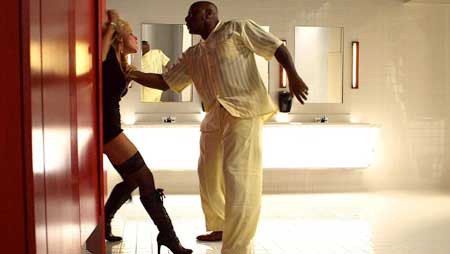 The story of Julia X takes shape right out of the gate and moves along smoothly. There are not many lost chances in Julia X to entertain the viewer. Kevin Sorbo masterfully portrays a twisted serial killer and, dare I say, in a sexy way. In many of these movies we tend to get a lot of useless camera angles. The camera was placed and used perfectly – no wasted motion. The soundtrack, which is scarce as all get out, is used to great effect. We are not bombarded with useless music that acts as a “tell” of the story and/or action. The tone of the movie is dark but is full of twisted and fun dark humor. Julia X, in a word, is smart. That can’t be said about most movies in the genre these days so kudos to them. 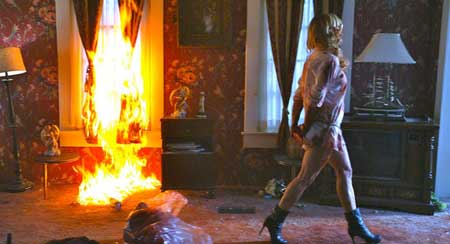 As a serial killer “The Stranger” has no set of kill style or methodology. The only thing seemingly tracking him back to other kills is the fact that he brands his victims. Some he drowns… some he buries alive… others he just beats to death. Julia’s fate is widely unknown other than she is pretty well screwed. This makes for a truly interesting and unique movie. Julia X is most definitely a must see especially if you enjoy movies that are consist of multiple layers. 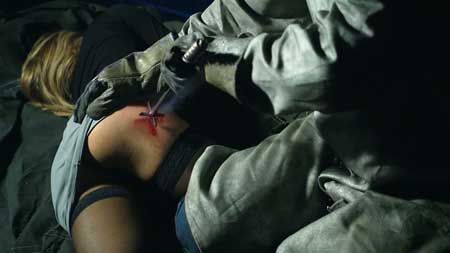 When a movie comes out that follows the serial killer rather than the victims I take notice. As a fan of the anti-hero and of the bad guy I love this. They are much more dynamic than a victim. The personality of the bad guy is much more unique. There are a lot of twists and turns that truly makes this a great a movie.
5 out of 5 pink hankies. 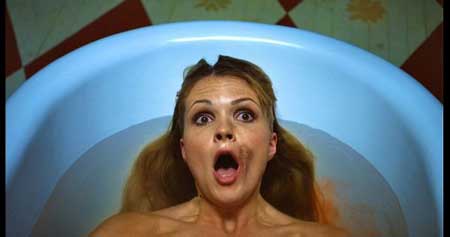 There’s always room for improvement, right? A little more into Julia’s background would have been nice. There is also that bit in the beginning with her sexual fantasy border lining on premonition. The way it was presented made me feel as though she may be psychic and we were getting another layer to the story. There were other elements that could have been manipulated to make the story even better than it already is.

There is a bit of sad with a Ving Rhames cameo. RIP big man.