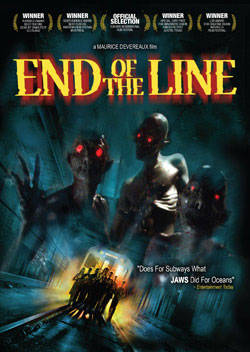 In this unsettling and creepy thriller, Karen (Ilona Elkin), a young nurse who works in a psychiatric ward, boards the last subway train of the night only to have it stop suddenly in the middle of the tunnel. As those around her are brutally murdered, Karen and a handful of survivors must face supernatural forces, homicidal religious cult members, as well as their own fears and suspicions of Armageddon, in order to survive

This Canadian film was, to put it simply, a breath of fresh air in my opinion. Like most independent features, this was not a remake or an adaptation of a book or any other source material. As far as I know, End of the Line, came solely from the imagination of the writer and director, Maurice Deveraux. It’s films like these that reaffirm my faith in the horror genre and its potential for originality. From the first few minutes of the movie, Deveraux goes for the scares. We meet Karen (Ilona Elkin), a doctor who is receiving cryptic notes and is being haunted by terrifying visions of strange people. We also see the suicide of one of her former patients.

While being bothered by creepy guy, Patrick (Robin Wilc**k) at a subway station, Karen is quickly assisted by Mike (Nicolas Wright), who she befriends only a few minutes before the sh*t hits the fan. Not long before the two board the subway, the train stops and leaves its patrons in an almost darkness. We meet Julie (Emily Shelton) as she is the next woman to be assaulted by Patrick. Also on the train are Sarah (Nina Fillis) and John (Tim Rozon), a couple who are having a little fun in the dark while they wait for the train to start again. Just before power is returned to the subway’s system, an old woman stumbles upon Karen and Mike. Betty (Joan McBride) exclaims, “Thank God!” when the subway car’s lights switch back on.

She gets a message on her cell phone, replaces it back into her purse and then produces a large crucifix, except it’s not only a crucifix, it’s a crucifix with a blade concealed in it’s bottom half. She proceeds to bury the blade into Mike’s back, claiming that it must be done to save them. Several other people, who are dressed similar to Jehovah’s Witnesses, all simultaneously receive messages on their phones and whip out their own deadly knives-slash-religious objects. The next person to have his run in with the religious wackos is Neil (Neil Napier) who manages to procure an ax before bailing out into the subway tunnel. The group (Karen, Mike, Julie, John, and Neil) manage to escape the subway car and run into Davis (Danny Blanco Hall) and Frankie (John Vamvas) in the tunnel. They all manage to take refuge in an upstairs office. It doesn’t take them too long to figure out that there is something more to the homicidal fanatics than it seems, when the phones cease to operate and the television and radio both broadcast strange noises and images.

The acting in this film is, for the most part, enjoyable. Everyone does a great job to bring Deveraux’s dialogue to life. I actually thought that Nicolas Wright possessed a kind of Edward Norton type charm in his performance, while Danny Blanco Hall’s portrayal of Davis echoed the role of Duane Jones in the original 1968 version of Night of the Living dead. Both actors seem to have the same attitude and demeanor, which makes their characters all the more interesting. Robin Wilc**k as the desperate virgin who just wants to get laid before the apocalypse was also a great addition to the cast.

There’s plenty of gore in this film to satisfy most horror fans, and some really well done creature FX in the movie’s climax. Kudos to Adrien Morot for his work as End of the Line’s special Makeup effects.

There’s a couple of problems that I can think of that might bother some viewers. One, is the sudden change of style in the second act of the film. The beginning sets you up for a very different type of movie than what it eventually ends up becoming. The other thing, is the film’s sudden ending, I don’t want to spoil it for you, because I want you to see the movie, but all I can say is check it out for yourself.

End of the Line is a solid, original horror flick that is worth your attention if you’re a genre fan.

Tags End of the Line