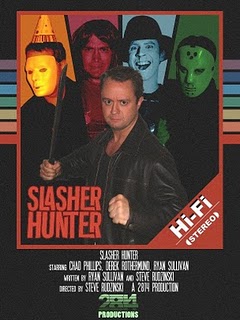 Wherever there’s an asshole killer in a mask, he’ll be there. Whenever dumb kids go to a cabin with no phone reception, he’ll be there. THE SLASHER HUNTER is here to save your dumb ass from a ragtag gang of the most notorious slashers.  Led by the cold-hearted Frank, they are determined to obtain one teen’s seemingly endless supply of the Survivor Gene, which grants immunity to slasher attacks.  Five slashers.  One Slasher Hunter.  They’re going to need more slashers.

Intentionally campy, purposefully weird, it can mean only 1 thing… the Slasher hunter is in town. This release comprises the individual shorts into a full length film. The film ranks in at a little over 30 minutes. It’s an independent release filmed and orchestrated on a micro budget so you know its gonna be off the cuff and beaten path.

Though at the same time it’s highly original by using a combo of derived horror icons to play out its premise. Leading the pack of slashers, is a Freddy knock off (Director Steve Rudzonski), that combines Freddy Krueger and the snow miser into a sharp, but nasty fellow known as “Frank. His buds, who present themselves as horror icon knock-offs sporting family trades and masks have all joined forces to terrorize and do what they love to do. In fact their main target seems to be a cabin which is consistently filled with repeat visitors who have grown weary of being attacked every weekend by slashers. This entry features Frank (Freddy), Larry (Myers), Jay (Jason), Charles (Chucky), and Pleatherface.

The premise seems to be along the lines of a greatest hits of horror icons who have come together to do what they love best. The film itself is filled with one liners, film associations and a general “poke fun at” approach to the genre itself. As the director tells us in his commentary, the idea was spawned off of a need to establish what he is calling the “survival gene”. This is a gene that some victims possess that keeps them from becoming victims (or something like that). This gene is of great desire to the slasher community who would like this for their own purpose…which would be, not being able to be killed. Now the clincher is that the gene (semen) has to be sucked out of the balls from a male holder which is really wrong on SO many accounts. But the notion here is that it adds a ridiculous comedy element to the film that has the slasher going down on a survival gene holder pretending to be a female in disguise.

Slasher Hunter, is our local hero who in his own condescending way is all about killing off the local group of slashers. He usually is able to dominate the confrontations with a quick set of moves and a fast machete on hand. His obvious asshole attitude makes for a good interchange between characters. The release has alot of extras  on it which makes up for the shorter film length, though it stills feels like the right length and doesn’t belabor too much. My only complaint might be the production video look which presented itself as a more blurry VHS look than the high def look that others are shooting out these days. Another comparison might be the effect when you watch a 3D film without the glasses. However it is a micro budget film and it doesn’t make any attempts to pretend otherwise. The humor is tongue and cheek and originates almost from a “Scary Movie” style of one-offs. The FX are really kept in the vein of early slasher films which would lunge and cut to a stabbing or throat cut. 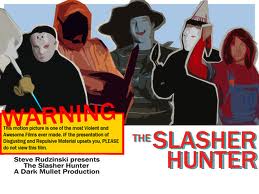 In summary: Slasher Hunter is a fun campy original piece of work that has as much fun with its story as it is to watch. If your in one of those in the “I need something different” lull, then throw your attention to “Slasher Hunter”.
Now if you don’t want to go the DVd route you can check out the 5 minute episodes online at slasherhunter.moonfruit.com/