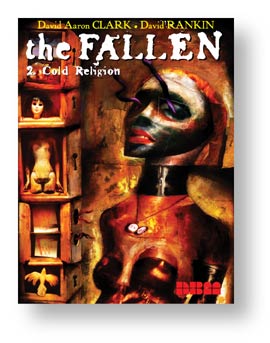 When I first learned that Miran Kim wouldn’t be doing the follow up book on the “Fallen” I was disappointed. However, once seeing the new direction and cover, that disappointment turned into anticipation. Artist David Rankin took the helm of this edition and with stylistic and emotional vigor. First off it contains a really appealing cover. Now anyone in the digital arts field knows that its got Mckean technique written all over it almost down to a blatant impersonation, however upon review Rankin uses that as his base but clearly moves into a moody effort of paint and acrylics all his own. The result is a pretty surreal and colorful twisting display of static swirling imagery.

A hybrid of beauty and ugliness created to carry the story form one frame into the next. I found alot of the imagery somewhat incomprehensible, but yet at the same time I really dug it. It is not a graphic novel to view in low light ad you need the light for clarity among the painted figures or it just gets lost. David put a great deal of effort this book and it really shows. I feel this either will be a hit or miss with viewers depending on your personal need of aesthetics. The contrast is deep but at times hard to understand in its viewing. In my opinion I think his greatest work in Fallen is the larger images that allow for more clarity and detail. They could stand as works of art on there own.

Now on to the story. Fallen 2: Cold Religion is a dark story filled with despair, misery and adult content. I could imagine the writing much more controversial if the images revealed that but to most casual viewers they wouldn’t see it in first glance. It is quite deep and gothic tale. It is summarized as “Tattoo artist John Savory witnesses the rise in power of a silent underground of vampires in the leading edge art neighborhoods of New York City. But who is he really?. I found it a bit confusing as it is described as a Gothic Vampire story. These vampires seem to prey on victims except for Rena Mojica, an artist who is able to resist there influence. The setting is based in Manhattan and intertwines fetish sex, bondage and night feeding. Rena develops a friendship with tattoo artist John Savory who also recognizes the vampires for who they are.

This book is the supposed 2nd volume to a 3 volume set. The first being the Miran Kim release which was absolutely amazing. Volume 2 has its own place even though to me it falls beneath the original release. Though the art is cool and its nightmarish gulash is worth the price.