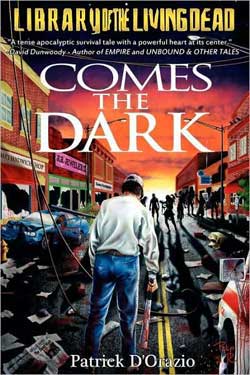 Comes the Dark is the first novel in a planned trilogy from talented zombie author Patrick D’Orazio. Fans of zombie and horror may recognize Mr. D’Oraizio’s unique last name from one of the many critically acclaimed stories he has placed in independent anthologies over the course of the past two years. In that time he has had stories from zombie, horror, bizarro, and even erotica genres all find publication. Apparently, he still found time to write a zombie trilogy that brings his obvious talent to a grander stage.

As the initial offering of the three part tale, Comes the Dark grabs you from the first few pages and drags you into Patrick D’Orazio’s, aptly titled, dark zombie apocalypse. Comes the Dark begins with the zombies already a destructive force that has humanity on its knees. The story opens with a normal everyday family man, Jeff Blaine, returning to his suburbia home with a ragged backpack full of supplies for his wife and two kids. He arrives home to discover the undead have slaughtered his family in his absence, leaving him angry and broken. Jeff channels his rage and destroys the zombies that killed his family with his weapon of choice; a blood streaked aluminum baseball bat.

With his family dead his house becomes a box of bitter memories and Jeff has no other choice than abandon it and find safer ground. Drawing on his never ending hate for the undead he invites them in for a memory burning barbeque. He tries to flee but finds his subdivision sealed off with crashed vehicles and half eaten corpses. Determined to escape the shambling hordes of suburban undead he enters back into the subdivision/war zone to try another exit. He comes across Megan, another widowed neighbor from his subdivision, and the two attempt to reach safety together. Jeff has given up hope and lives only to destroy any undead in his way. His world view is as dark as the destroyed world around him. It keeps him alive but gets him into a few harrowing situations.

Once free of the doomed suburban neighborhood Jeff and Megan search for other survivors in the world gone mad around them. The two survivors navigate a wasteland of spent bullets, crashed cars, and devoured human corpses. Mr. D’Orazio takes his time and describes the decimated world in great detail; be it a single shambler or an entire ravaged town. Jeff and Megan explore the wasteland and it gives time for the characters to build into relatable humans. They seek out possible rescue areas and end up finding two more living humans; a big man, George, still intent on making it home to his family whom he hasn’t seen since the outbreak started and a quiet teenager named Jason.

As four they flee the larger cities and seek shelter among more deserted country roads. The ending is a cliff hanger to set up for the second in the series, Into the Dark, and it does a hell of a job snagging you.

Comes the Dark doesn’t take awkward stabs at making big changes in the zombie formula. Instead it is an unflinching look into how the normal everyday man in Anytown, USA deals with the world getting eaten alive in front of him. The zombies are prominent monsters; staggering and howling for flesh when ever the characters stop for a breath or supplies. I enjoyed the mix of good character building and tense action as it seems often times zombie stories sacrifice one for the other. I recommend Comes the Dark to all zombie fans and I looked forward to the next installments in this trilogy.