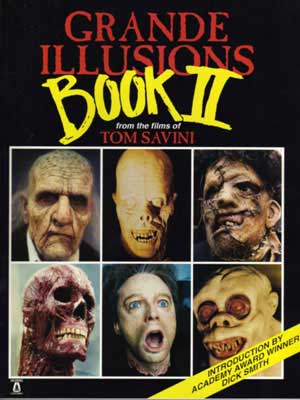 Although these are two books in their own entity, they are one within their own right. This, the sequel to the review, continues my special Double Creature Feature Grind House Review for them both. Just as the first installment of the instructional two part novella was presented by none other than George A Romero and Stephen King, the two masters of Horror… It would be horrific (and not in a good way) if the same treatment wasn’t provided in the next installment. A few more words from the wise that bring us further into the secrets of Tom’s Savini’s world of gruesome deaths and creepy monsters. This introduction is provided by the man who made Linda Blair as grotesque as she was in the original Exorcist. I’m talking about the dude that was doing make-up for NBC during their conception, the Make- Up Artist of the original Dark Shadows television series, himself, Dick Smith. Technically, he needed no introduction, but I thought I’d let you know anyway. Dick talks about how one specific gag in Dawn of the Dead even stumped him upon viewing. This dude is a wonderful storyteller (not liar, but storyteller). He can take an everyday occurrence and make it seem like a historical event, and not by over description. Simply by the way he explains it.

After the intro of course is part two to the foreword that was written over a decade prior. A second introduction by Tom into the later half of his career as the gore father of Horror and beyond… and now, beyond. The foreword is also a dedication to everyone he had worked with prior to and to the completion of Grande Illusions II. As he explains in the foreword, there are so many other movies he had worked on in between the two separate chapters of this book. This is the second leg of his career… Over ten years have passed and there are thirteen more new films to reveal the gory magic behind… in bloody detail.

Our first stop is a return to Camp Crystal Lake for Friday the 13th part IV: The Final Chapter. Savini’s second involvement with the Friday the Thirteenth series. Here, we see an aged and mangled Jason Voorhees. We also see how the raft kill was executed, along with a diagram of making the carnage set sale. It is revealed at the end of The Final Chapter how the machete to the face is pulled off (not physically, “pulled off” as in shown on screen), sending Jason back to the grave once more… brain and gashed head exposed.

After his final involvement with the Friday the 13th series, Tom moved on to Day of the Dead. Here, we see how zombies were sculpted, arms were severed and gashed open and mechanics for moving severed heads were made. We see a brain in early stages and the infamous missing eyes… and who can forget the bisection with the guts hanging out all over the place. Tom didn’t… It’s in there. Graphic black and white photos are also included.

This brings us to Monkey Shines. The effects for the brain surgery scene are “exposed,” including photos. Stacy Foster is still very pretty, even with a part of her head missing. Most of the remaining explanations for this film are on the monkeys themselves. After all, they are the stars of the show. Tom shows how the mechanical chimps were designed, how hair was added and they were controlled. The creation of the teeth is also added. The entire assembled anatomy of a remote controlled chimp. There is also a Special Guest writing with him on this chapter, Special Effects Artist Greg Nicotero.

From killer chimps to a Red Scorpion. This shows the severed arm, gripping onto the bottle. It also has a cool shot of Carmen Argenziano with his arm missing, complete with the gored up socket. He also talks about the neck appliance used on Dolph in the film. This is one of the shorter chapters, possibly the shortest of the book.

From there, we go on down to Texas for the second installment of the TCM series. The Texas Chainsaw Massacre 2. We go right into it with a very early black and white photo the chainsawed yuppie at the beginning of the film. There are severed hands and arms shown during their creation. Then we have pictures of the one and only Bill Moseley as Chop-top. It shows how the metal plate for his head was formed as he constantly heated it it up with a coat hanger for a small snack. From here, we have the skinning of L.G.( R.I.P. Lou Perry) and the foam creation of Grampa Sawyer (which I also proudly own a pour of). There are other tricks of carnage within this chapter.

Following TCM 2, we have the hidden and practically buried jewel, Bloodsucking Pharaohs In Pittsburgh. There is a full page black and white photo of a skinned face and Jerry Gergeley is working on a cadaver one page over. In this chapter, we have some of the most gruesome work in the book. Naked female torsos ripped in half, rib cages broken and opened and so much more. We have a topless life cast, a skull animatronic and a brutal gut impaling. On the next few pages, the brutality does not stop. There is a headless body and another skinned corpse to keep the blood flowing… from page to page.

Next up, the book covers Heartstopper. This film is directed by John Russo(co-Writer of the original Night of the Living Dead). It also can be found as Dark Craving on DVD. Tom just mostly supervised the effects for this film as he was also an actor. Jerry Gergeley took over most of the effects for this film. It explains how the hole in the back of the head was achieved with the gunshot blast(this info is also an extra on the DVD).A full page picture of the chest impalement is the opening page. It also has a small picture of a wide open body… Not for the squeamish.

The next chapter is one of my favorites and has been since childhood. It’s Lizzy, from the episode Inside the Closet. An episode that Tom wrote and directed himself of Tales From the Darkside.The opening full page is a picture of Tom sculpting Lizzy in full body view of the entire creature. Fucking awesome. Two other Tales From the Darkside episodes and included… Halloween Candy and Family Reunion. The next page is the fiberglass skull for Lizzy and the bottom part of its body. The next few pages are full color photos of many random Savini moments. Some include him as the Devil, as the ghoul from Creepshow and several zombies in which he created.

Next, we have Two Evil Eyes.The was the classic Dario Argento and George Romero Double Feature. Two stories in one film. This too, was a “Creepshow” in its own sense. Three great minds of Horror coming together to form one feature. Generally the same, exit Stephen King, and enter Dario Argento. The first full page photo is a black and white shot of Tom working on the open cavity of the woman victim’s body. Here we learn the full body life casting technique. We have more usage of fiberglass, sculpting rotting flesh and the animatronnic for the evil black cat star of the film.

Rising from the grave next, we have the re-make of the George A. Romero classic that started the zombie movement… Night of the Living Dead 1990. The feature that Tom himself also directed. There are zombie make-ups, story boards and a full page picture of Tom punching hair into a severed head. Some of you may have seen this popular photo before.

This brings us to Trauma. Tom goes over cut throat appliances and severed heads. Next, there is a piece on punching hair. Believe me, folks, this is something that takes some getting use to. Some that can sew may have an easier time ventilating than others. It is a tough and tedious task.

Next is the film Killing Zoe. This shows graphic pictures of out- of-the-kit and homemade brutal burns. Each step is there on how to pull off the effect from start to finish. There are face gash photos and parts of the script included as well.

Up next, we have Mr. Stitch. This shows the layout for the puzzle faced girl with pictures. There are also life casts on one page. The rest are lung, brain and decorated in wires. Finaly, we have a few pages on case molds, complete with pictures. Closing out the second book, we have another full color scrapbook of Tom Savini doing what Tom does best… Being Tom.

In my opinion, both of these books are valuable sources of information for anyone wanting to learn Special Effects. If you can’t go to his school in Pennsylvania for any reason, buy these two books. It’s not as good as going and getting the full hands-on experience, but you’ll get the basic idea. The rest is up to you. Knowing Tom, he should hopefully have a third installment of this book coming soon. He is staying away from Special Effects these days and is working more on acting. Catch his opening lines of The Tribe: The Lost Boys 2…”What the f*ck are you doing on my beach? The Gore Score of this book is a thirteen plus. This will probably be the only book even bearing a Gore Score at all. Trust me, the violence is high throughout the two books. You get to see all of the gory goodness and also learn how it was done. I give this book, Grande Illusions I & II, TWO EYES GOUGED (CHECK IT) OUT.