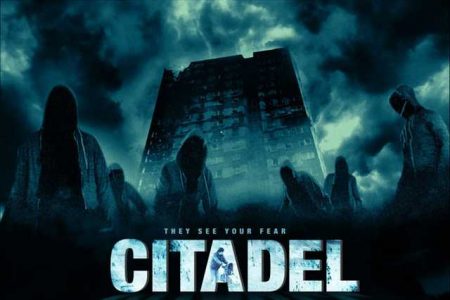 Written and directed by Ciarán Foy, CITADEL is a UK/Irish co-production that began shooting in December for 4 weeks, with a three week stint on location and studio in Glasgow, followed by one week on location in Dublin. Now that the filming has wrapped the post production has begun and a release date for the film is not yet available. The story for CITADEL is based on the true-life experiences of Ciarán Foy who was involved in an unprovoked attack on his person and left with a case of agoraphobia.

The film stars Aneurin Barnard (IRONCLAD) as Tommy, a man terrified of the outside world and the people in it. He encounters strange, hooded children who viciously attack adults with septic syringes and harvest their blood. These monstrous children are also kidnapping other small children to increase their numbers.

Synopsis:
“Citadel tells the story of widower and single father Tommy Cowley, a man inflicted with chronic agoraphobia since the day his wife was attacked. He was unable to protect her. He lives in Edenstown, the council estate from hell. Here he finds himself terrorized by a gang of syringe wielding feral children, who are intent on taking his baby daughter. With the help of a kind Nurse and a renegade Priest, Tommy learns the nightmarish truth surrounding these hooded children. He also learns that to be free of his fears, he must finally face the demons of his past and enter the one place he fears the most – The abandoned Tower block known as the Citadel…”