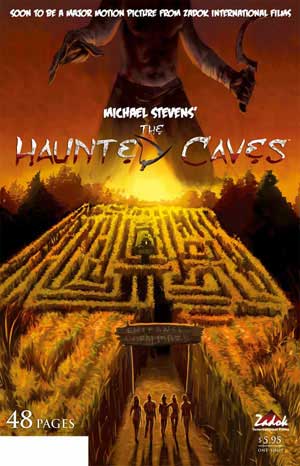 Based on a Screenplay By: Michael Stevens
Adapted By: Sammy Montana
Published by Devils Due Publishing
Publication Date: 2008
Format: color – 48 pages
Price: $5.95

Take a trip through the real Haunted Caves…

I just got my monthly comic order in and within the batch of comics that I had ordered was the graphic novel, The Haunted Caves. The graphic novel was published by the company Devil’s Due Publishing. They are the publisher who are publishing the official Halloween comics written by Stefan Hutchinson. It was funny I read an online review site that stated Stefan helped write the Haunted Caves, after being clarified with the writer of the Halloween comic book series, he was supposed to but his schedule was quite busy with cranking out the scripts to the many horrific adventures of Michael Myers, but onto the Haunted Caves.

This is nothing short but a slasher thriller, nothing quite new but exciting as hell. I had read an interview where this graphic novel was an adaptation of a screenplay where the company Zadok International Films wants to turn this into a feature length horror movie. I’ve read the graphic novel last night and the artwork was a bit different, something that I’m not quite used to. It had a cartoony feel, but it was perfect for the mood and tone of the book. The story was well written, the story is about a group of five teenagers who decide to go to a haunted house called the Haunted Caves, one of the characters a real obnoxious son of a bitch decides to cause a bit of a stir and not only gets himself thrown out of the Haunted Caves, they then happen upon an advertisement placed on the windshield of their truck telling them to take a trip to the real Haunted Caves.

Just like what you would see teenagers do in a horror flick they decide to go and check out the real Haunted Caves. They happen upon and discover that it is abandoned. What they don’t know is that it is the hiding place of a demented serial killer who has a thing for sickles. The group decides to cut through a maze of a cornfield. They stumble upon an abandoned house.

Once inside, they discover they are locked inside, the doors would not open, neither would the windows. That’s when the true terror starts. My only complaint was that it was not long enough. It was 48 pages. This was one hell of a horror story that I would love to see turned into a horror film. The killer is as mysterious as they come, it’s obvious the creators of this graphic novel were inspired by the movie Halloween. This is a real cool inspiration to have when doing a slasher story.

The pacing of the book was good. There were two artists involved in creating this book. Each of them captured an ominous atmosphere just perfect. The shadows were well used. A big round of applause to the creative team who created this graphic novel, I’ve also read that if there was a demand for a sequel that they would do one. I only have one thing to say about that, MAKE THE SEQUEL! I really enjoyed The Haunted Caves, the trailer that Devil’s Due did for the graphic novel was badass. I really think this would turn out to be one hell of a horror movie. I can’t wait for the sequel to be made.

As a reader of all things horror related I must say this is one hell of a horror graphic novel to read around Halloween season. If there is going to be a sequel made to this one shot, please make it longer. Six issues long would be good. There is so much story you can tell with this particular character who I am trying to find out more about. One thing I can say is that he is sick and twisted and one kick ass slasher. Please make a sequel. This would be one hell of a franchise.

Available from Devil’s Due Publishing