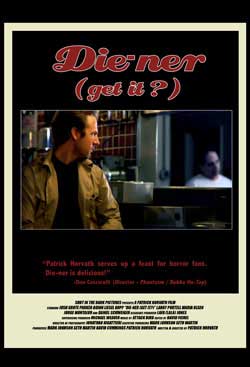 A horror-comedy of errors, Die-ner (get it?) explores the existential dilemma of a sociopath killer who runs into the unique problem of his victims rising from the dead. Its business as usual for Ken, our hero and killer carte blanche, as he comes upon a diner in the middle of nowhere. After promptly dispatching the waitress and cook, Ken marks another notch on his belt as he prepares to continue on his wayward journey. As luck would have it, a young married couple arrives, Rob and Kathy; who are in the middle of a long trip on the road as well as a relationship on the rocks. The three are then greeted by the only regular who frequents the defunct diner, local sheriff Duke Burdett. It would seem as though Ken has his job cut out for him (the pun is intended), playing a rousing game of cat and mouse with the sheriff as his suspicions become aroused. Just when the game is tuning up, all hell promptly breaks loose as the cook and waitress begin walking aroundagain. Tickled pink with curiosity, Ken holds the couple and, now wounded, sheriff captive as he tries to figure out what to do with these newest ex-patriots of life. Die-ner (get it?) delivers the goods of a horror film with a lot of laughs, a lot of heart, a lot of heads, a lot of fingers, a lot of blood and a lot of guts.

Ken is a smooth and suave sociopathic serial killer who’s just added a couple more notches to his belt at a rundown diner in the middle of nowhere. As he’s about to move on to the next town for more shenanigans, a young yet unhappy married couple arrives on the scene looking to continue their bitchfest at each other over some grub. Ken almost gets another couple of bonus kills when suddenly the local Johnny Law Dog comes in for his nightly coffee break. Just when you think this might turn into a nice little cat and mouse game between Ken and the Sheriff, bigger problems arise for everyone still in the diner as Ken’s victims are no longer content with being all cooped up in the freezer when there’s warm flesh out in the diner to munch on. Some corpses just have no f*cking common courtesy when it comes to staying dead…

When it comes to horror comedy, especially on the no-budget indie scene, I feel the need to quote the immortal Mr. The Kid from YOUNG GUNS – “There’s many a slip twixt a cup and the lip.” That phrase can be taken many ways of course, but I think it best fits our beloved genre in the sense that there are many, many ways that a potentially great horror comedy can get buggered up between script, filming, and cutting it all together for the masses to see – the most recent debacle I’ve personally witnessed in that category being the painfully unfunny parody, STAN HELSING.

I’m very pleased to report though, that we do not have that problem here. In fact, we get two, two, two subgenres in one – not only do we get the serial killer flick with antihero Ken doing his thing with his mighty pocket knife, but we also get ourselves a zombie flick, complete with many laughs on top of the blood and munching. The genius part of the whole thing for me lies not in the fear and bumbling of most of the main characters that we’ve come to expect in movies like this, but in Ken’s utter dumbfounded curiosity about the entire situation. While everyone else freaks out and runs screaming as if having witnessed a Roseanne nude scene, he keeps his cool and wants to experiment on them and learn more about the situation. It was those scenes that actually got the biggest laughs out of me.

This is indeed possible by none other than the excellent casting of Josh Grote, on whose shoulders this responsibility squarely rests on, and who pulls it off without a hitch. Most impressive for his very first screen credit (that I can find, anyway). I don’t know if the man is flattered by or sick of all the obvious comparisons I’m sure he’s getting to Edward Norton now – not only in looks but voice as well, but I’d take it as a compliment. He exudes the same cool charm on camera as Norton, and comes across as a very comfortable and secure actor. I truly look forward to more work from Grote. But don’t think I’m forgetting everyone else in the cast – the supporting cast was also awesome, especially Maria Olsen as the waitress, Rose. Whether alive, dead, or undead, she kicked ass; as did Kopp and Quinn as the bickering couple – it was actually their fear and bumbling in the face of trying to deal with the zombie incursion that got the rest of the laughs from me.

Writer/director Horvath didn’t drop the ball anywhere on this flick, in this announcer’s humble opinion. For a low budget indie flick, I was very surprised and impressed with the production design and effects. This is definitely a dude to watch for in the indie scene.

LAST WORDS:Was it all perfect? No, of course not – some of the jokes fell flat and the getting-to-know-you-during-flashbacks didn’t give me the payoff I was hoping for because yes, dammit, I DID want to know more. But at the end of the day I was totally entertained throughout and laughed my ass off at the sarcasm and carnage. And yes, I even paid enough attention to things to get the message at the end – very well played! Lovers of indie horror with big laughs, keep an eye out for this one and snatch it up when it’s released on DVD – you can thank me later. 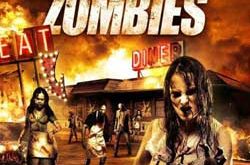