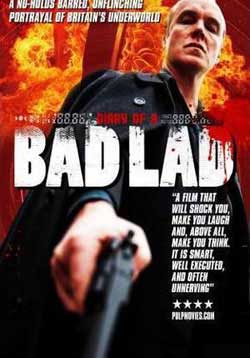 A film about frustrated filmmaker Barry Licks attempts to make a documentary about a businessman, who he believes is involved in property rackets, prostitution, p*rnography, and the importation of recreational drugs. For security reasons Barry never uses his real name, and calls him Ray Topham. Barry recruits a team of young wannabees. Their quest leads them to two of Rays associates; a local cocaine supplier and ex-S&M p*rn actress called Joanne Miller, and the charmingly psychopathic Tommy Morghen who acts as Rays personal security consultant. They soon realize that Barry is out of his depth, and so they exploit him for their own purposes with both hilarious and tragic results. Diary of a Bad Lad explores themes of sex, drugs, violence, exploitation, and the desperate limits that people will go to in order to make a film.

Straight from the UK market comes a new film that takes advantage of the pseudo documentary aspect. Barry Lick, a frustrated teacher and filmmaker sets out to create a film based on the underground crime scene. His Choice, a local seedy business man whom he cites under the fake moniker of Ray Topham to protect his identity. In the process he is introduced to Tommy Morghen who acts as Ray’s security consultant. It begins as Barry and his makeshift film team dig into the locals who might be associated with Ray or have knowledge pf his dealings. At first it starts pretty standard with some clippings, some interviews and some commentaries from various sources who can comment a bit on camera. Though it doesn’t take long for Barry to meet up with tommy who sets the whole turn in motion.

Tommy presents himself as professional but intense. Almost like you’d expect a Ray Liota role to transpire. While the documentary is based on Ray it’s apparent after a while that Tommy is in fact the major player in this game. Their interactions begin with stops, visits and some on camera narrations that dig into the industry. This industry included prostitution, property racketing, p*rnography and drug trafficking. As Tommy explains in one scene….”one hand feeds the other”. We soon find that there is a method to the madness, that involves a cunning exchange of services and needs.

When they visit a couple who can’t make a payment, the couple is cohersed into making payback by creating a home p*rn video that could be sold to pay back some of the debt. It’s done with finesse and opportunity but its also clear that it’s how the market is kept in motion. The camera team and director in the course meet all sorts of shady, bizarre and violent individuals along the way that reveals the scene for what it is under the our noses on a daily basis. In a bizarre encounter which has the team visiting a local drug supplier, they happen to encounter a buyer who’s high on smack. As he interrupts the interview he begins to annoy the camera man into an exchange of words that is nothing short of surreal. The drug addict caught in an obvious Muttering of nonsense continues on in this discussion that last for about 5 minutes on camera. It’s comedic in nature and also quite mind numbing to listen to. As he darts away to use the rest room, it’s clear that he’s not retuning when he passes out and dies in the process. The team now faced with getting rid of the body continue to film as they place the addict in a local park.

Everything is caught on tape, and seems to be supported by the talent on camera. Ray who’s reluctant at first agrees to let them keep film in in exchange for a commercial favorite that he’s in need for his property management. As a viewer, that notion seemed to allude me at first as to why these obvious crime lords would agree to such coverage. Though the film reveals itself in the process that has the crime lords actually manipulating the filmmakers in it’s unveiling. It clever, smart and unsetting all rolled into one.

Barry, who seems to go with the flow of his film project begins to suspect that things are going too deep even for his project. Ray continues to provide opportunities that seems to also fuel his ego for being seen on screen. Tommy becomes darker and darker thru his dealings and obvious clever exchange of instances. It’s a documentary film that becomes a film in itself heading down avenues that most never get a chance to see or become privy to. Directed by Michael Booth, the film provides an engaging direction that pulls you in with every frame. Special mention goes to writer Jonathan Williams and his unique script that captures a truly scary side of life with a motive in mind. Joe O’Byrne who plays the role of Tommy Morghen provides the acted highlight of the film with cunning and a convincible nature that works extremely well for Bad Lad. It’s horror in a different light with a range of extremes that don’t overpower but hit you with a brick when they arrive.

Tags Diary of a Bad Lad