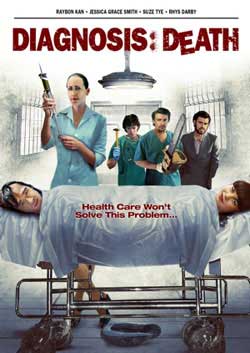 While volunteering in an experimental drug trial at a creepy testing facility, human guinea pigs Juliet (Jessica Grace Smith) and Andre (Raybon Kan) find clues pointing to a double murder, but their medication’s hallucinogenic side effects hinder their attempts to solve the mystery. A horror spoof that pokes fun at Peter Jackson’s early movies, this New Zealand production co-stars the Flight of the Conchords’ Bret McKenzie and Jemaine Clement.

Andre is a teacher with…shall we say “questionable” ethics and moral standards, to say the least. And when Karma decides to knock on your door and make you its bitch, you have no choice but to deal with it and pay the Rowdy Roddy Piper. Not too long after we meet Andre, he is diagnosed with a rare and incurable form of ass cancer. But sometimes, just sometimes, Karma has bigger plans (just ask Earl Hickey), and Andre is given a 2nd chance with a weekend treatment plan, and is locked away with a fellow cancer sufferer and pumped full of experimental drugs…or are they really just syringes full of sugar water? Anyways, once the duo get on their “drug” treatment, all sorts of horrifying visions and nightmares start occurring…or are they? Are the drugs really causing the hallucinations, or is there a mystery involving a supernatural force with an agenda at play here? Well…DUH!!

I’ve come to the realization that for as much love as I’ve given to the Brits in my reviews for the last few years of their horror comedies, gushing over them all like a horny, pimply fanboy at Tiffany Shepis’ table at a Fango convention, I’ve basically ignored praising our friends down in New Zealand. Well, I apologize, and that’s going to change. After all, back in the 80s when I first got my hands on a worn out VHS copy of a gory little alien invasion flick by a then-very-little-well-known dude by the name of Peter Jackson, called BAD TASTE, I was hooked on the horror product of that little island north of Australia.

There was also no disappointing after that either, as Jackson continued in that same vein with MEET THE FEEBLES, the ultimate zombie splatter flick BRAINDEAD (or DEAD ALIVE, however you want to look at it), and then star-studded ghostly epic, THE FRIGHTENERS. And of course we can’t forget Jonathan King’s contribution to the zombie film with his over the top bloody and hilarious BLACK SHEEP.

And thankfully for fans like me, now you can add DIAGNOSIS: DEATH to the mix. It’s billed as “a must-see for fans of FLIGHT OF THE CONCHORDS”. But from what I could tell of my very limited exposure to that show, the cast members really only have glorified cameos, but they are hilarious here nonetheless. Of course, the movie is also billed as being “as funny as SHAUN OF THE DEAD” and “as horrific as SEVERANCE”, of which I find it to be neither, because that’s not a fair comparison. SHAUN did for zombie movies what hadn’t been done since DEAD ALIVE, and did it to classic proportions. SEVERANCE was THE OFFICE in a horror setting, and was genius in its delivery and execution (to coin a phrase). DIAGNOSIS: DEATH is more like a really f*cked up, acid trip, horror movie version of HOUSE, M.D., and I love it for that!

The writing team of Stutter and Kan (also directed by Stutter) shows their comic roots throughout this flick, and I for one am hoping they’re not done with this type of filmmaking. Hell, I’d like to see them do a straight up, balls-out horror flick too in the future too – as long as they stay in this genre, tis all cool with me!

In an age where we have been bombarded with painfully unfunny spoof and parody movies on these shores lately (yep, I’m looking right at you, STAN HELSING), it warms my cold, black heart to see an actually FUNNY horror comedy come my way again. It actually reminds me a lot of Broken Lizard’s venture into the horror/comedy venue when they did CLUB DREAD – it has that feel and type of humor to me – and you know I’m digging that sh*t harder than Leno kisses NBC’s ass to keep his job. This sucker is available in stores and at fine online retailers anywhere and everywhere, so do yourself a favor and pick it up soon. New Zealand, I SALUTE YOU!!!