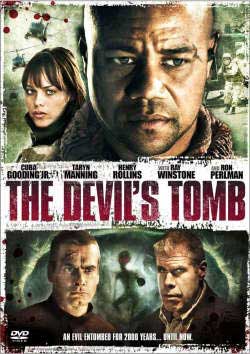 A team of mercenaries under the command of hard-charging war veteran Mack (Gooding Jr.), are contracted by a mysterious CIA operative named Elissa (Cruz) to rescue a scientist (Perlman) working on an archeological discovery deep under the Middle Eastern desert. With the help of a mysterious priest (Rollins), Mack and his team soon discover the true secret of what lies beneath the sands. A secret that has been protected for thousands of years. A secret that is not of this Earth

With an impressive cast of characters we have the latest, action-horror flick by the name of Devils Tomb. Names like Cuba Gooding Jr, Henry Rollins, Ron Perlman, Ray Winstone, Jason London just to name a few have come together to deliver this hell-beneath-the earth military vs demons thriller. Our team by the name of “Angels”, an elite military unit sent in on a combat mission are sent in to rescue one Dr. Lee Wesley (Ron Perlman) and reestablish communication that was knocked out due to a seismic event. Led byan anthropologist Dr. Elissa Cardell, the mission is assumed to be just like any other mission. ..get in , get out and retrieve as directed. The team consists of a energetoic band of soldeirs by the names of Nichols, Hicks, Yoshi, Click, Doc, Hammer, Garcia, and their by the book unit leader Mack (Cuba Gooding Jr.). What the team doesn’t know is that the mission is much more of a surpernatural experience than they could have anticipated.

The film begins like most films of this nature. In short, the ever present “sense of urgency” followed up by a team of elites sent to do the job. If this doesn’t sound familiar.. this formula was used in several movies. Doom, Event Horizon, Aliens, Pitch Black and Ghosts of Mars. It’s a formula that works because it gets the story right into the heart of action without any unneeded slowdowns. And rightly so, the film moves at this pace throughout. The destination? A research station buried underground in a place called Shabaka out in the middle of the dessert. They are informed that the mission is a “need to know” and that everything is to be left where it is (except the Dr.)

The only problem is that what they are getting into is hell on earth. Tagged the Gehenna project, they are instantly welcomed with sorts of pustule walking dead types that don’t seem to die easily but also are not short of worlds. Our horror friend actor Bill Mosely is the first to greet the crew. Though he’s seen better days with his eyes whited over and skin that thats closer to a corpse than anything.

While his performance is short-lived (pun intended), he brings that freaky fellow dynamic that he’s known for with spades. The team continue there descent into the underground facility and take out a few demon spans in the process. These possessed humans seem to have the power of goopy spit as they use it quite often in there attack modes. You’ll recognize alot of the routine that follows on a pretty similar course as Aliens with its search and attack mode action play. I also kept referring back to Event Horizon, a rather more horrifying film that I found similarities in. You might even compare the underground facility take on the Doom films. Special mention also goes out on the hot babe scene featuring a full nuded up Holly Weber!

In any case, the team find what all the secrecy is about. A frozen Nephilim, or fallen angel from God that a group who call themselves Adjurists are sworn to protect the earth from by finding them and exorcising the evil spirits. Well, that can’t mean a great situation to the team who lose a few remembers to hallucinations in the form of familiar faces or demons in disguise. On that note, we get a fair amount of gruesome scenes along the way. Nothing too over the top but an occasional great Fx work induced moment that will satisfy the horror lovers. I guess I’m just a sucker for these kind of films whether they feel derivative or not. If you’ve seen the recent “Against the Dark” the action has that whole peruse the corridors and shoot thing going on.

As you can imagine with a well casted assembly of talent the production is pretty impressive. Though the reported $10,000,000 budget might be a bit too much, which was probably invested mostly on high actor fees.

As result I came out of this film feeling satisfied and entertained, it packs a wallop of demon punch and the great ensemble carries the flow.