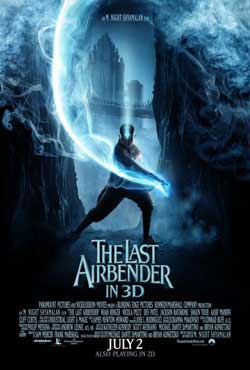 Four nations tied by destiny (Air, Water, Earth & Fire) are in a state of upheaval when the Fire nation begins a war against the other nations. 100 yrs. have passed & the destruction The Fire Nation has showed no sign of abatement. But there is one whose destiny is to be the last Avatar with the ability to control all four of the elements. His name is Aang & he is accompanied by Katara, (A Waterbender) & her brother Sokka to restore balance to their war torn world.

Ok, Ok. I know that “The Last Airbender” isn’t a Horror film by any stretch of the imagination & maybe this review shouldn’t even be here but as I am The Black Saint & I got to see a sneak preview of the film tonight (6/29) I thought some of you might be interested in the opinion of someone who knew nothing of the cartoon the movie is based on (never saw one single episode…ever). It’s not The Saint’s style to watch Nickolodeon at all. But I do know of it’s existence so I figured what the hell?

“The Last Airbender” is the story of Aang (Noah Ringer). A boy who was ordained by a group of monks to become The Avatar. The one person who has control over all ogf the elements: Air, Water, Fire & Earth. He is being sought by Prince Zuko played by Dev Patel (Slumdog Millionaire) who is the son of the ruler of The Fire Nation, Fire Lord Ozai (Cliff Curtis). The prince has been exiled from his land by his father for failing to follow orders & murder innocents & he believes that by capturing the Avatar he can regain his father’s favor. 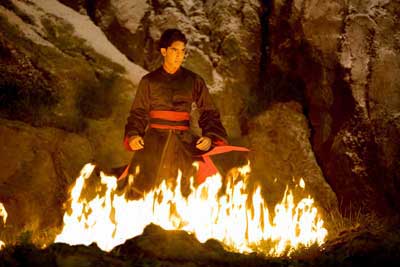 Aang is accidentally released by Katara (Nicola Peltz) & Sokka (Jackson Rathbone) while they are ice fishing. It seems that Aang did not want the responsibility of being the Avatar & ran away from the monastery where he was being trained & ran away before his training was complete. He is found encased in ice with his “Pet”, A large flying carpet with eyes & a tail called an appa.

They are released from their frozen tomb & Aang comes to the realization that what he thought was a few days was actually 100 years & the world he knew existed no more. He returns to the monastery to find a pile of bones that used to be monks before the Fire Nation dweebs caught up to them in their pursuit of Aang. This of course angers Aang no end & he begins to manifest the one element he mastered before he ran away, Air. Each of the nations have powers over their respective elements but The Avatar is the only one to have mastery of all 4 of them. 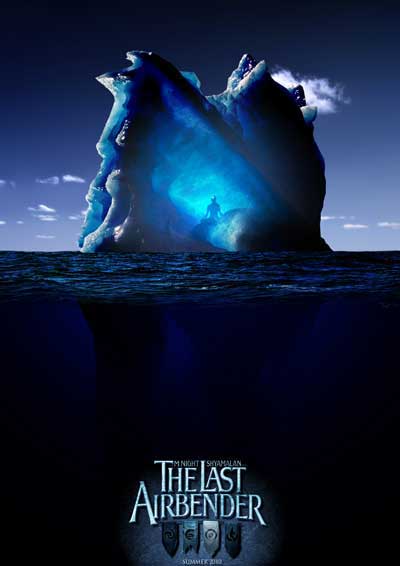 He realizes that he has to finish learning his mastery of the other 3 elements to fulfill his destiny & Katara & Sokka have offered to travel with him to stop the Fire Nation from it’s war against the other nations. Katara is a “Waterbender”, One who has power to control water but she isn’t too good at it so this journey will also decide her destiny as well.

Now like I said before, this kinds of thing isn’t the Saint’s usual cup o’ java. But I found myself engrossed by the film which is prefaced by the title “Book One”. The performances by the 3 leads were uniformly excellent. Especially that of young Noah Ringer. He straddles the line between doe eyed innocence & sheer unfettered anger very well. When this kid gets pissed..He gets really pissed! The Saint loved him.

Young Aang must now travel to the other 3 nations (Water, Fire & Earth) to master those elements & end the reign of terror the Fire Nation has spread across the land. His first stop is The Water Nation. But before this he makes a stop at a prison where The Fire Nation has captured the people of The Earth Nation & convinces them to use their powers to fight back against the Fire Nation. He makes a very good point & tells them that they;re standing on the Earth, The very element that all of them have power over. Why aren’t they using it against their captors? I thought the same thing actually but it seems the people of the Earth Nation are pacifists & prefer living under constant scrutiny in what are basically concentration camps rather than fight. Aang shows them the way. They don’t have to kill anyone to escape, Just use their natural powers to fight back. Earth trumps Fire, Don’t they know that? Fucking showroom dummies. But once Aang shows them it’s ok…They kick some fiery ass for sure.

The 3 then travel to The Water Nation so that Aang & Katara can hone their Waterbending skills. This is where the entire battalion of The Fire Nation finds them & prepares for all out war…I can’t really continue with the story (No Spoilers) but I will say that it’s very exciting from that point on. The special effects were excellent in the film. The 3D was unobtrusive for the most part. But as we all know it wasn’t originally filmed in 3D so there isn’t too much of it to speak of. But what 3D exists in the film was well done, Especially in the opening credits. There isn’t a drop of blood dropped in the movie save for the scar on the side of Prince Zuko’s face placed there by his father for his obstinance. So if you see it don’t wait for the red stuff because it isn’t there. But the film is never boring & the fight scenes are something to see. 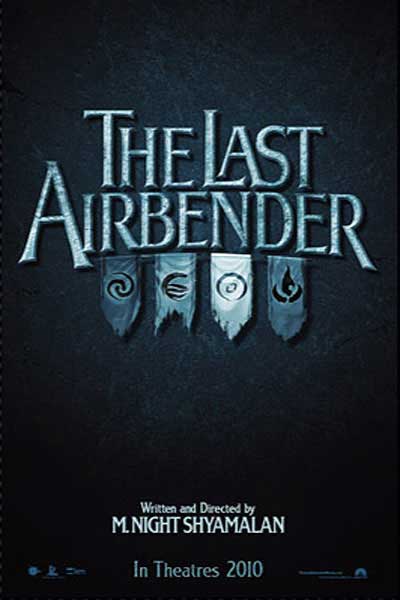 It was directed by M. Night Shyamalan and he shows he has a deft touch for this kind of film. Apparently he can do more than the last few hokey “Twist” movies he prides himself on (“The Happening”, “Lady In The Water”, etc..). I thought I read that he was not responsible for the screenplay but the credits have him listed as the screenwriter as well. The dialogue is crisp & for someone who has no idea of what the film is based on, I fell right in line & felt like I knew all about the animated series at the end of the film.

There isn’t much more I can say about the movie except that it wasn’t a waste of The Sain’s time & I don’t think it’ll be a waste of yours either…fan or not. It’s a well made film & I’m glad I got to see it (For Free Of Course). Free is good…… 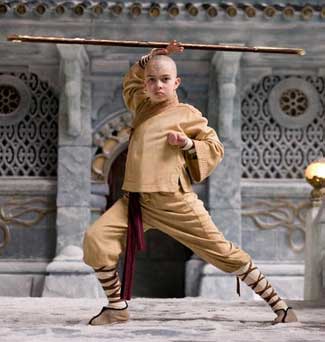 As an extra added bonus we were told that this was the first time the film had been screened for the public. It was also being screened in the theatre next to ours for critics because it officially opens later this week. We were informed of this by 2 of the stars of the film: Nicola Peltz & Jackson Rathbone. They were there to introduce the movie to the audience. Personally I was sickened by their cheerfulness (The Saint HATES happy people). But they did fire up the audience I suppose. So they earned their paychecks…

All in all the film is an excellent waste of 90 minutes or so if you’re inclined to see this type of movie & I actually enjoyed myself quite a bit. That makes me worried…Am I getting soft? Fuck No!! Remember this was a free screening. The Saint almost never says no to free screenings (“Sex & The City 2” Be damned)!! But if you can see it in 2D you should & save a few bucks. The 3D isn’t that strong an element of the film to spend the “Surcharge” money theatre owners charge for the glasses you need to use for the 3D. 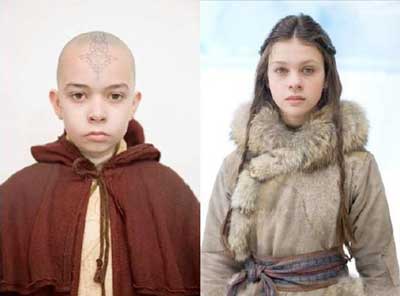 The Saint says See this movie! 3 1/2 out of 5 mausoleums. And for me to score this type of movie that highly is very rare. It ain’t a horror film so I usually wouldn’t pay to see it on a big screen. I would’ve waited for cable at least. But you all have my permission to watch it & let me know what you think. I’m actually interested in what my acolytes think of it….