Rocky Costanzo’s supernatural horror feature Amhurst, will finally be released to home disc on the 19th of October via Hourglass Pictures, we were informed this afternoon. Penned by Lisa Costanzo, the movie stars Amy Tiehel, Alec Hogan, Stephanie Hullar, and Jesse Buschini.

Artwork is pictured, and extras for the disc, which will be presented in a 1.85:1 widescreen transfer, with Dolby Digital sound — are set to include…”an audio commentary by Rocky and Lisa Costanzo, “Beyond the Boundaries” 30-minute documentary, with interviews, deleted scenes, and outtakes, and…Trailers.”

In the movie…Rebecca Barnes-Cabot (Amy Tiehel) used to be a twin. She and her sister, Rosie went to stay with their alcoholic and sometimes abusive grandfather after their mother’s death. When they were ten-years-old, Rosie went missing…and never returned. 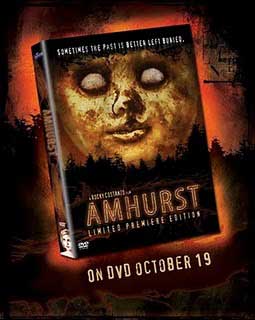 It has long been suspected that their grandfather, Meryl Barnes (Tim Field), was responsible for little Rosie’s disappearance. Now the old guy is dead – but he may not be gone, as Rebecca becomes plagued by nightmares and strange occurences. The first 1,000 units sold will be Limited-Premiere-Editions, with alternate artwork (pictured above) on an O-card.