In this latest update from Toronto After Dark, the city’s premier festival of Horror, Sci-Fi, Action & Cult Cinema:

1. TORONTO AFTER DARK RETURNS TO HALLOWEEN SEASON FOR 2011!

7. STAY CONNECTED, SPREAD THE WORD ON TORONTO AFTER DARK!

1. TORONTO AFTER DARK RETURNS TO HALLOWEEN SEASON FOR 2011!

Toronto After Dark Film Festival is excited to announce the dates of our 6th Annual Edition. For 2011, in response to overwhelming fan demand, the festival of thrills and chills returns to Halloween Season for the first time in three years. Next year’s Toronto After Dark takes over the legendary Bloor Cinema for 8 thrilling nights of cinematic mayhem OCTOBER 20-27, 2011. Fans attending previous years’ festivals have been the first to see such awesome new genre films as THE LAST EXORCISM, LET THE RIGHT ONE IN, DEAD SNOW, REPO: THE GENETIC OPERA, BLACK DYNAMITE and ROBOGEISHA to name a few! Who knows what we’ll be premiering first for fans in the city in 2011? Be sure to block our OCT 20-27 in your schedules as you won’t want to miss it!

If you’re planning on attending, feel free to RSVP at the just-created Official Facebook Event page for Toronto After Dark 2011, and invite your friends here:
on.fb.me/tad11-event

And if you haven’t already, be sure to also sign up for our e-newsletter to get notifications about the 2011 festival here:
bit.ly/tad-enews

Toronto After Dark’s 2011 Call for film Entries will begin in March. If you are a horror, sci-fi, action or cult short or feature filmmaker, we’re interested in hearing from you. To get the official Call for Entries Announcement when it goes live please join the festival’s Filmmaker Contact List here:
bit.ly/tad11-film-contact

Toronto After Dark Film Festival wants to better know what movie fans in the city are into. It’ll take just a few minutes to complete our Movie Fan Survey, you’ll help improve our festival, and you can win some very cool film prizes in the process! Enter to win by Friday, Dec 17, 5pm here:
bit.ly/tad-moviefan-contest

After a spectacularly successful engagement at the Museum of Modern Art, New York, the Tim Burton Exhibition arrives at TIFF Bell Lightbox with more than 700 items which traces Burton’s development as a major creative force from his earliest drawings and paintings to the sophisticated elements he created for some of the world’s most treasured films. The exhibition contemplates Burton’s career as a director, producer, writer and concept artist for live-action and animated films including EDWARD SCISSORHANDS, THE NIGHTMARE BEFORE CHRISTMAS, BATMAN, ED WOOD and SWEENEY TODD to name a few, along with his work as a fiction writer, photographer and illustrator. This exclusive engagement runs until April 17. Tickets are $22.75 ($18.25 for students, free to TIFF Members). Complete details, including venue opening hours available at the TIFF website here:
bit.ly/tiff-burton

ENTER TO WIN TICKETS TO THE TIM BURTON EXHIBITION!

Toronto After Dark Film Festival, in association with TIFF, is thrilled to have two pairs of tickets to give away to fans to the exclusive TIM BURTON EXHIBITION at the Lightbox! For your chance to win, enter our movie fan survey contest by Fri, Dec 17, 5pm here:
bit.ly/tad-moviefan-contest

We have some great news for fans of independent horror, sci-fi, action and cult cinema looking for unique gift ideas! A number of this year’s hottest indie genre titles, including films that played at this year’s Toronto After Dark Film Festival are now available on DVD and BLU-RAY. Click on the links below to visit Amazon.ca’s listings for the respective titles. Feel free to also search for these titles at your own favourite video retailer:

– THE HUMAN CENTIPEDE: the most talked about horror film of the year, this shocking mad scientist movie was Toronto After Dark’s 2010 sold-out Closing Gala film!
amzn.to/-Hum-Cent

– ALL ABOUT EVIL: this campy cult horror comedy TADFF 2010 gem from Peaches Christ co-starring Cassandra Peterson (ELVIRA) is now being self-distributed. Support the filmmakers by buying the DVD directly from their website here:
bit.ly/-all-ab-evil

– ROBOGEISHA: Another TADFF 2010 hit, this delerious sci-fi/horror//action mashup from the same twisted Japanese filmmakers that brought you THE MACHINE GIRL and TOKYO GORE POLICE has to be seen to be believed!
amzn.to/-robogeisha

– CARGO: Switzerland’s first Sci-Fi feature film impressed fans at TADFF 2010 with its nods to such cult classics as 2001: A Space Odyssey
amzn.to/–cargo

Toronto After Dark has 10 kick-ass DVD & Blu-Ray Prize Packs to give away to fans:

Looking for some alternatives to typical Hollywood fare during the Holiday season? Here’s Toronto After Dark’s picks of the cool horror and cult flicks screening on the big screen at the city’s independent movie theatres. Click on the links below for more screening event, venue and ticket info:

7. STAY CONNECTED, SPREAD THE WORD ON TORONTO AFTER DARK!

For breaking news on our film festival and Toronto’s Horror & Cult film event scene, be sure to subscribe to our: 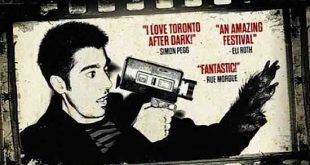