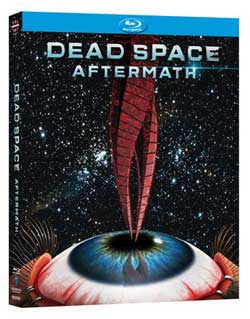 Redwood City, CA and Beverly Hills, CA – December 14, 2010 – Electronic Arts Inc. (NASDAQ: ERTS) and Anchor Bay Entertainment today announced that a new Dead Space™ animated movie, Dead Space™ Aftermath will be available on January 25 to coincide with the release of the highly anticipated videogame, Dead Space 2. Coming from the award-winning game development team and the 2008 animated feature production company, Dead Space Aftermath will feature several internationally renowned animation directors that use their unique and bold visions to explain what happened during the first-responder mission to Aegis VII. The directors will do this through the perspective of four survivors in this fast-paced horrifying thrill ride that stretches the limits of time and space.

In Dead Space Aftermath, the year is 2509 and not only has Earth lost contact with the USG Ishimura and Isaac Clarke, but also the USG O’Bannon, which is the first responder ship sent to rescue them. Four crew members of the O’Bannon have survived, but no one knows what happened to the rest of the crew, what they were doing, or what secrets they may be holding. All will be revealed…in the Aftermath!

Making a return from the first Dead Space animated feature film is producer Joe Goyette and supervising director Mike Disa. Dead Space Aftermath will also be produced and animated by Film Roman (“The Simpsons,” “King of the Hill”), and boasts a stellar voice cast led by Christopher Judge (“Stargate: SG-1”), Peter Woodward (“Babylon 5,” “Charmed”), Graham McTavish (upcoming theatrical release of The Hobbit), Ricardo Chavira (“Desperate Housewives”) and Gwendoline Yeo (“Star Wars: The Clone Wars”). Dead Space Aftermath will be available on Jan. 25, 2011 on Blu-ray™ for $34.99 and DVD for $26.98, with the pre-book coming out on Dec. 29, 2010.

In Dead Space 2, engineer Isaac Clarke makes his return in a blood-curdling new adventure on an all-new space installation known as “The Sprawl.” The lone survivor of a horrific alien infestation, Isaac finds himself confronting a catastrophic new nightmare. Battling dementia, Isaac will do whatever it takes to save himself and dominate the relentless enemy onslaughts. Equipped with a new arsenal of tools to dismember the necromorphs, Isaac faces the challenge head-on. Players will see Isaac fight bigger, scarier and more epic battles that will keep them on the edge of their seats.