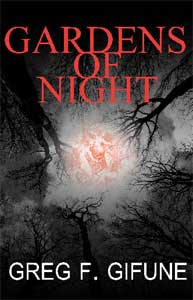 “The world of men is dreaming,
it has gone mad in its sleep,
and a snake is strangling it, but it can’t wake up.”
~ D. H. Lawrence

“Recovering from an unthinkably violent trauma, Marcus Banyon
comes to perceive a different reality. Have his eyes been opened to
forces long hidden from the rest of humanity, or has he suffered a
psychotic break as his doctors suggest? As he retreats to an isolated
chalet with his also-recovering wife and his oldest friend, Marc’s visions
lead them to an ancient mythology steeped in mystery and deception …
and to a trio of sinister beings who hold the fate of the world in their
hands.”

Greg F. Gifune has been called “the best kept secret in dark fiction.”  Secret? Gifune’s work has been published all over the world, and his already considerable readership grows daily. Books like KINGDOM OF SHADOWS, CHILDREN OF CHAOS, JUDAS GOAT and SAYING UNCLE have all garnered consistent praise.

GARDENS OF NIGHT
Available at Amazon, Barnes & Noble and the Horror Mall