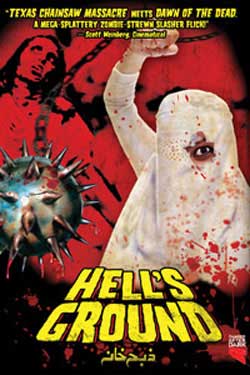 Pakistan s first splatter flick in the tradition of Friday the 13th and The Texas Chainsaw Massacre delivers spine-tingling thrills when an attractive group of teens pile into a van that runs out of gas in the middle of a dark mysterious forest. Their ghoulish nightmare begins when rotting fresh-eating zombies and a decapitated head-toting screaming banshee-like hitchhiker begin to terrorize them at every turn. But when a mysterious figure dressed in a blood-drenched burqa appears sporting a medieval weapon dripping in gore even the teens prayers won t save them from a night of savage demented horror.

Director/co-writer Omar Ali Khan give us a screen for scream experience is his groundbreaking Pakistani horror show.

It’s not to often I get to see a horror film from Pakistan. So I was curious when I received the film “Hells Ground from TLA Releasing. You tend to find because to the cultural differences that the feel offers something new, than the usual faire. The cover boasted of zombies, gore, and axe wielding lunatics. I was down for the watch!

Now if your not ready for spoilers, I’d just go on the advice that this is a pretty good horror flick. If you want the goods..read on!

Hell’s Ground is noted onthe cover as a Texas Chainsaw meets the Dawn of the Dead. That’s a pretty good rundown, though I’d lean towards the Texas Chainsaw more than the DOD. The film begins as 5 hip five Pakistani teenagers decide to head out on a road excursion. On the way they stop for some chai and pastries (which is in fact Pakistani delicacy of some sort.) Now you know your not in the US when the hipsters stop for chai and pastries, rather than Beer and Funyuns. The odd backwoods cook informs them to re-think there journey as they are heading into “Hell’s ground”. Now I’ve seen enough of these films that if a creepy old cook in the middle of nowhere gives you some advice to not take “that road”… its a pretty sure bet you should “not take that road”. Though for your viewing pleasure, they take the road. One of the kids gets sick and they stop so he can upchuck those delicious pastries. It just so happens that as they partake in rest stopping that bloodsucking zombies come lurching out of the forest. As we are told the Zombies are product of the polluted rivers nearby. Not the kind of water I’d want to quench my thirst on.

We’ve all seen zombies before, though I found myself really digging the zombies in this film. They were slow and methodic, but the way they moved and looked into space with that lost gaze really did the trick. The FX were “on the money”. Very bloody, scarred, and almost like they stuck there heads in a bowl of spaghetti…but in a good way. The influence here seemed more reflective of Fulcis work that modern aggressives, though it worked for me. So in the interest of being intelligent teenagers, they hightailed it out of there proto!

Really I found this to be 3 kinds of movies mixed into one. We meet up with zombies early on and then the farther we go down the road, the zombies disappear and your in Texas Chainsaw land. Though for the record there is no chainsaw. What we encounter is a homicidal maniac (I just like that word) who runs around into he forest wearing a “burqua (parka-like hooded attire) and swinging a medieval ball battle mace. That seems like a good combination to me…its not often that homicidal maniacs sport medieval weaponry. The chase scenes on the forest though had a larger Friday the 13th feel to them …so really its a hodgepodge of horror tributes. Also I found it unique that the teens go back and forth using there native language mixed with English. So the subtitles flash on and off depending on the language of there dialog. I previous reveals they are shown mixing it up with their bedroom walls covered with US horror retro posters. A nice exchange of culture on screen to blend the mix of origins.

Along there journey they meet a madman, who they run over and then finally stop due to lack of gas. In case your wondeirng you should “ALWASY” run over the mdaman…good choice! Our killer starts taking the teens out one by one as the he/she runs around swinging the ol ball and mace on unfortunate victims. We also get to see the killers lair/meat shop and meet the wonderfully deranged mother.

We do later find that this huge mass of a killer is really a daughter ..though we are never given the benefit of a reveal of the killers face. Instead we spend most of the time looking into her maniacal eye hidden beneath her clothing. We do learn more about the killer and her family which as expected are a messed up bunch of deviates.

Now to stop for a breath of fresh air! In most films of this nature, the killer gets beaten down, unmasked..the hero walks away…and then insert complimentary shot of killer getting up in the background. However, it was nice to see that our hero takes out the killer, gets up walks a few steps and goes back to make sure the job is finished. No unmasking. no return of ball and mace killer…just a good pummeling and of they go. This little change of pace, put a smile of my face,

Now for the judgment call! – Yes, this is pretty entertaining foreign film. It manages to combine multi horror elements and still make it all work under one roof. In research it appears the film was shot of the course of 30 days and that this is Pakistan’s first horror film!. A pretty good fact considering it hits all the horror elements with ease and is a a very well constructed Of course you can feel the US influence, but no harm there as I believe it hits more marks than most US films anyway’s. Great stuff indeed! Highly recommended!