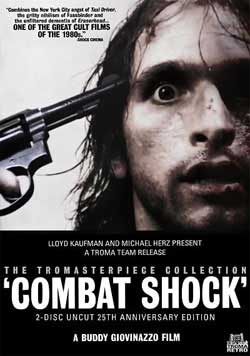 Frankie is a war vet whose life sucks. He has no money, a nagging wife, junkie friends, and a deformed baby. This is the story of one day in his pathetic post-war life.

Combat Shock comes in a fantastic 2 DVD package which features a bunch of extras, trailers and commentaries. The bonus is the film comes in its original 16 mm director cut version and the Troma release theatrical cut. This being the first time exposed to the film, I went straight for the directors cut.

Vietnam films either work or don’t. It’s something about the realism of the scenes or the realism of the charters that makes all the difference. Frankie Dunlan is one such character that leaves you feeling the effect of his performance long after. Directed and written by Buddy Giovinazzo, the film first came on the scene in 1986. For cinema at that time, this was considered edgy and highly dramatic. It’s 1980s feel is apparent in the style and actors performance…. however at the root is a solid downward spiral of one’s journey thru life. Frankie was a soldier. He served his time and paid the price. While on a mission he took out an asian girl point blank before setting out on a chase thru the jungle. The Vietnamese finally caught up to him in which they proceeded to beat him half to death.

Though the preferred route was to torture him per way of leaving him to rot in a cold bamboo submerged cage. When he finally was found he spent 3 years in a military hospital recovering from what we assume was a coma. Fast forward into the present and Frankie is facing a brand new torture. This one is the misery of life that doesn’t provide what it should for a vet who served his country.

Living now with his wife Cathy and their deformed baby, he just tries to get thru the day to make ends meet. His baby is result of him being exposed to something in the military and his wife ..the once love of his life….nags as they face starvation. Frankie deals with nightmares, flashbacks and life on the streets. His friends are drug addicts, his acquaintances are thugs who he owes money too and the city doesn’t seem to have anything to offer. He has hit rock bottom with a threat of eviction, an empty refrigerator and a heavy conscious on his back. Trying to provide for his family has become almost impossible.

The greatest line comes in the form of “I’m never sure when one torture has ended and the next begun” referring to his paths in life that seem to lead into a cruel existence that should have worked out for the better. His father, a once well to do wealthy business man is his last hope. But when he realizes that years later his father has found misfortune and loss…… his world seems to just shut down. “Combat Shock” has its fair share of war bodies and aftermath gore but the most depressing aspect actually comes in his later life that seems like a nonstop dead end street.

A message that rings thru out is that scenery may change but its still a jungle wherever you are. Actor Rick Giovinazzo gives a great performance as Frankie Dunlan who feels too real for comfort. The tale is shocking not so much in a visual way as it is in a reality gone wrong sort of way. Viewers may come out of this depressed as the story winds it way to a brutal climax.

Buddy Giovinazzo put alot of heart and soul into this as both director and editor on the project. “Combat Shock” is a cold and hard journey thru an urban nightmare that never lets up. Its essentially a war story that carries forward into a different war that still is an gritting as the first. 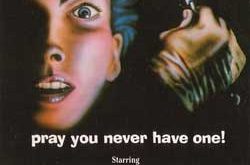 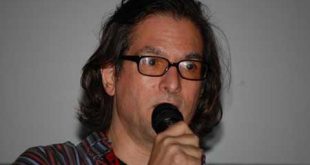