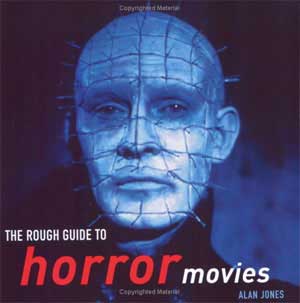 Jam packed full of Horror of every kind, if your a horror fan like I am, you’ll really enjoy this comprehensive overview by Alan Jones. This book is not the kind of book you read all in one sitting. It is better served to take in on separate readings so that you can get the most out of it. Displayed with bold titles and easy to read descriptions, it is broken down into separate chapters that define the horror genre in different ways.

First off, we begin with “Horror in Literature”.This alone could fill a book, however Alan only touches on the important elements that proved influential to the horror industry pointing out prime authors and novels that inspired later works. With covering such an large overview of the horror industry even 277 pages is too small to detail everything. Rather Alan chose to cover alot with a little to make it all fit under one roof

Alan Jones briefly takes you though the “History of Horror” as it is defined per decade. As it’s called “Over 100 years of Horror”, it gives you a nice overview without weighing you down with an overwhelming number of films and facts as they occurred through out the film history. Instead he condenses it down to what occurred, what was important and a few plugs for films he thought were worth a look in those generations. Even with as much horror films I’ve seen, there’s plenty mentioned here that peaked my interest to go out and seek. It’s important to note that through out the book, he places isolated side bars that go a bit further into a particular focuses that he deemed important to mention. These alone are entertaining and informational.

Then we are taken into the 50 classics chapter, which you’ll note doesn’t say top 50. This is important as you might be expecting certain films that aren’t mentioned here. With the selection process being so subjective, it probably wouldn’t please everyone anyway’s. I immediately noted the absence of films like “Amityville Horror” and “Alien”, but then realized that this list was classic films that shouldn’t be ignored by film goers. Many greats are mentioned and a few that you may have let slip by as well. The reviews are well written, informative and engaging. You’ll also notice certain favoritism’s through out the book such as director Roman Polaski, who’s more obscure works might not fit exactly in the top 50 but are worthy of mention anyway’s. That’s ok, though as works of his are mentioned that I myself am curious now to dig up. The reviews noted here go beyond just simple “what the films about” and provide a more detailed overview of the films history, comparison and notes of interest. These reviews I found enough information in them alone to entertain.

Then we go into what he is calling “The Icons”. This title is simply the idea of touching on so many important horror figures. From fictional characters to directors to actors its got a bit of it all. Again I’ve read entire books on Director greats such as Carpenter and Romero, however we are given a quick overview filled with info and facts. Just enough to get a taste. This one of my more favorite chapters as I can dig a bit into alot of figures. It also has fun little tidbit break offs along the way such as “Star debuts in shockers” which will instantly make you go…oh ya, that person was in that film!

Around the world …covers exactly that. Alan cites the horror movements in several foreign countries and the influence they have had. This section is a bit shorter with Countries usually only taking a few paragraphs or a page. So we are not given a film for film but rather a sense of what that country has contributed. I found this to be ok, as we know Japan has had more to offer than say South Africa. My guess is this chapter could blossom into a full book itself for writers who are willing to do the research.

The book ends on shorter chapters mentioning web sites, magazines and products available for horror fans. Obviously not meant to cover it all (as Horrornews.net wasn’t mentioned…just kidding we weren’t around in 2005) but it gives a nice place for folks to start. I was however surprised that long front runners “Bloody Disgusting ” weren’t mentioned in this section. So maybe the author didn’t like a book review they gave??? In any case this is a damn great Horror book! I still have many sections that I want to dig further and now a whole list of obscure films I have to catch up on … congrats Alan for introducing this fine book to us Horror Fans!! 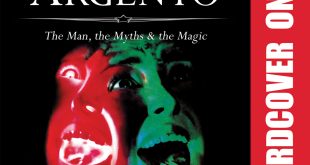