The answer to “Skyline”‘s ending….

You know people, I reviewed “Skyline” a few days ago & had some MAJOR beefs with the ending of it, as did many who subjected themselves to it. But, hindsight being 20/20, I started thinking about the ending & I think I might have figured it out (although quite honestly I am a little high right now) but hear me out. By the way, this commentary has spoilers in it & you all know that I hate spoilers but I figure everyone who’s going to see this sh*t has seen it already so here I go, navigate away now if you don’t want to know any more.  At the end of the movie we see our couple being sucked into the mothership apparently to die. Of course they manage to find each other as they’re being sucked up & get one last lingering kiss off before going off into alien oblivion.

The film could’ve ended there & it still would be a really bad f*cking movie, but it would have been over. No more damage done to our eyeballs right? But no….It keeps going into the belly of the mothership where we can see all of the references to “Alien” & “The Matrix” up close & in all their slimy glory. It seems the alien are cherry picking people off of the floor, cutting off their heads, removing their brain, discarding their headless bodies & then inserting the brains into some sort of soldiers they have hung up on hooks waiting for brains to get going (apparently any species brain is just fine for this purpose). Our heroine awakens in a pile of slop looking for her lover, the father of her gestating child & finds him amidst all of the goo. She tried to get to him but…TOO LATE!! He gets picked up & his head is removed & then sliced open to have his brain removed & inserted into one of the alien…you know, I called them soldiers before but I really don’t know what they are. I don’t think the filmmakers knew either if that helps any. Let’s just call them Drones, shall we?

Ok, so now her lover’s brain is in a Drone’s head (I’m sorry folks, I love saying that out loud) & she’s about to be sliced & diced & removed of her brain as well when the creatures sense that she’s pregnant. What does that mean? Of course! Two brains in one body! Super cool! The aliens must be besides themselves with joy at how many brains they’ve found just laying around. But just as they’re about to slice into her belly first to get to the baby’s brain something is happening behind them..the Drone that is housing the brain of our erstwhile hero seems to be having some trouble getting up. He seems to be in pain, struggling to figure out something hiding deep within the recesses of his mind…..

That’s when he gets up & his eyes glow Red! If you noticed, Blue seems to be the dominant color in the Alien’s mode of combat. Blue lights from the sky, blue missiles being fired at us, Blue trails of crap all over the place, Blue, Blue, BLUE!! But his eyes are Red & he’s mad! He gets himself up & beats the sh*t out of the Blue meanies & manages to convey to her that everything is going to be all right with a touch of his big f*cking alien hand. What could it all mean?

He’s a Republican! What else could it mean? All of the blue brains are us poor Democrats that somehow got us into this situation in the first place. The aliens are obviously looking for Obama’s brain so that they could suck up whatever knowledge he has left in there after 2 years in the nut house but they’re not so smart either you see? Because they went to LA to look for it! Who goes to LA to look for people with brains? Are they crazy? No….They’re REPUBLICANS!!

As I mentioned in my review, the film continues after all of this with PICTURES of the ensuing action. Maybe the filmmakers ran out of money (they did stretch the f*ck out of $10 million I gotta say) but I think they were just embarrassed to even film the ending & just put up some production sketches instead. I mean most people are leaving the theatre as the credits roll anyway & these stills come up BEHIND the credits. What do the stills picture? Well, we see our hero fighting off a few more alien beasties for a couple of frames & then we see the Drone grab it’s head & rip it open…to see our hero climbing out of it! Yes!, the same hero that had his head cut off & his body discarded into a pool of slime! He’s back! In one piece!! He’s….RONALD REAGAN!! Back from the dead to save us all!

Yup, I think that they have Reagan’s head in cold storage somewhere & they’re just waiting for the day when they can just plant it on a fresh new body & give him 8 more years of ineptitude. All of the other drones…Democrats are soundly defeated in close combat by this super alien Republican Drone with Red eyes!! And not only is he resurrected from decapitation & subsequent brain removal to save his girlfriend & his child but he’s going to save the planet from all of the f*cking stupid Blue Democratic aliens who obviously haven’t been getting the job done. I mean we did Nuke em’ in the middle of the picture & that only seemed to piss em’ off didn’t it? As a matter of fact the f*cking mothership begins to put itself  BACK TOGETHER AGAIN! As a matter of fact the nuke must’ve been a dud because there was no giant cloud of dust obscuring the Sun from our eyes afterwards..No nuclear winter, just another sunshiny day in LA! Actually our remaining survivors seem unaffected by the nuke as well. Strange since they’re seemingly only a few blocks away from ground zero. Oh well, maybe some of those freaky little Gremlins that used to plague Bugs Bunny got to it before it was launched…f*cking annoying Gremlins!! Don’t you just hate that? I can see em’ now with their little hammers just beating on the warhead, f*cking up all of the internal wiring.  It’s so transparent people! Don’t you see it?? You don’t? Well…f*ck, I better take another hit off of this doob then shouldn’t I? 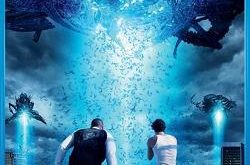 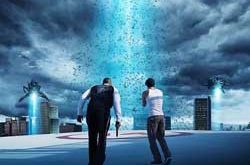 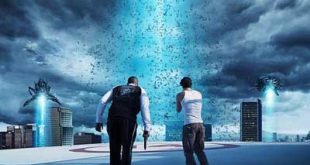