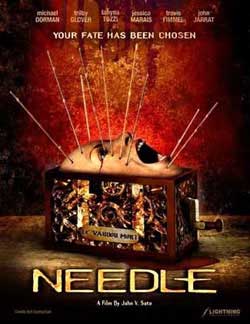 Don’t you love a movie about curiosities that should be better left alone. In this case, a box…(though it’s not square or presided over by a demon from the Cenobium tribe). However it’s rather mystic in its own right. What happens when your father’s estate is willed out and you are approached with such a box? Leave it for a later date, try and open it or show it to your friends, so that they try and do the same? Bingo, all of the above! This box however is a bit of bad karma all wrapped up in ornate style. When the box which is discovered to be an old revenge tool that is discovered missing, people start dying off in weird and horrific ways. The holder as it seems is able to inflict a voodoo-based revenge upon those she/he chooses simply by using needles against wax figured voodoo dolls. What is strange is the way the victims are tortured and dismembered in plain view without any visible methods. 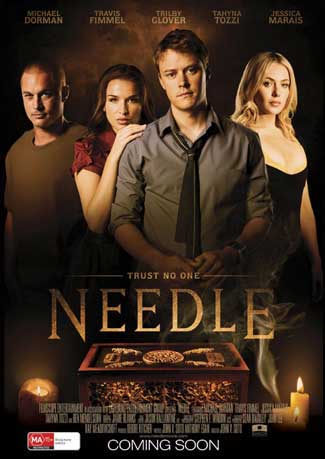 Needle begins on a promising note, but really fizzles out into more of a murder mystery than perhaps the supernatural shocker that we may have signed on for. Not that the elements of murder, a magic box and a perpetrator isn’t weaved into the story, but that I think we were expecting “more” out of the idea. We do on the other hand get treated to a few nasty mutilation metaphysical scenes but they are connected thru a drab drama between 2 estranged brothers who are trying to cope with the pains of the e past and the situations of the present. I began to feel that this aspect was more primary than a cursed box and because of it was rather boring.

There of course is a investigation going on in the background in which the detectives seem a bit too casual about finding mutilated bodies that are self-inflicting out of thin air. It also seems like the box itself was too easily “figured out” from the getgo when it should have maybe had stayed in the shadows for quite a bit longer. 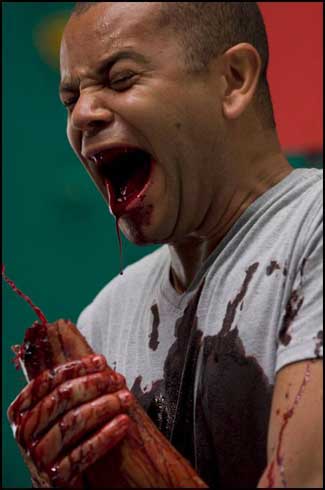 Something about that fact, also seemed to wear me down a bit. “Oh, it must be that box, lets go find it”….. is too shallow of a plotline thrown into a brother -relationship drama. By the 1 hour mark, I was starting to wonder it any real pickup was around the corner which never really came. Sure there are revelations about who, why and how…though they all felt too common and ordinary. In the end, Needle is just another horror title that falls into the pool of hundreds this year with no real conviction, drive or contribution to the genre. Perhaps its  more intriguing cover art is the best thing going for it which by my prediction will be enough to pull in viewers and make a needed quota for the release. A good way to classify t? Think maybe more in terms of a film that didn’t bring enough to the table to make the After Dark round of releases, and you’ll probably be closer to where this lies on the priority list to view. Needles may have been used, but they sure looked dull to me.