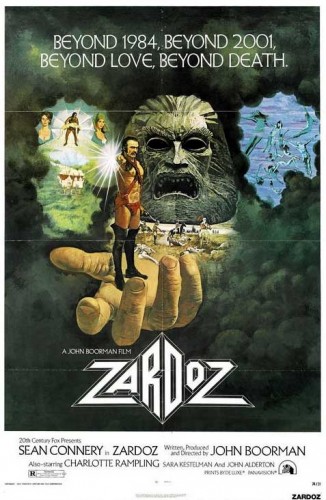 “In the distant future, Earth is divided into two camps – the barely-civilised group and the overly-civilised one with mental powers. A plague is attacking the second group, after which its members cease to have any interest in life and become nearly catatonic. When Zed, one of the barbarians, crosses over, the tenuous balance in their world is threatened.” (courtesy IMDB)

“I have seen the future and it doesn’t work!” cried the publicity for this barking-mad science fiction travesty written and directed by the occasionally brilliant John Boorman. Never mind the future, most critics felt this often hilariously straight-faced attempt to outdo 2001: A Space Odyssey (1968) in obscure symbolism, pomposity and existentialism didn’t work either. But if you’re in the right mood you might just get something out of Zardoz (1974), an inventive film too crammed with ideas for its own good. 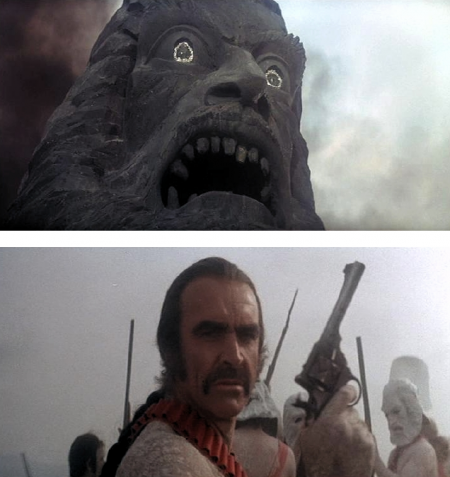 A huge stone head with a cruel smile sinks slowly from the sky and hovers over a landscape across which horsemen with gunbelts and loincloths are riding. Rifles fall in a torrent from its mouth and, with a booming voice, orders the horsemen to kill all lesser beings. This seems to be the stereotypical brutalised future that has followed some huge disaster. Civilisation is dead – or is it? Where does the head come from? 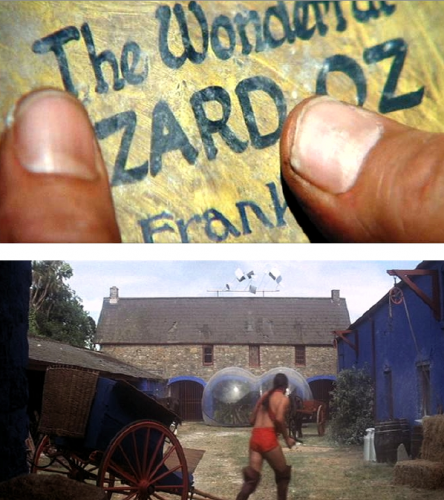 The Eternals rely on the Exterminators, wild hairy barbarians clad in red jocks, who keep the mutant population down and harvest grain for the Eternals. The Exterminators worship a large flying stone head named Zardoz, which visits periodically to spew guns and advice, and collect the grain. As Homer Simpson once said to Apu, “When they were handing out religions, you must have been taking a whiz.” 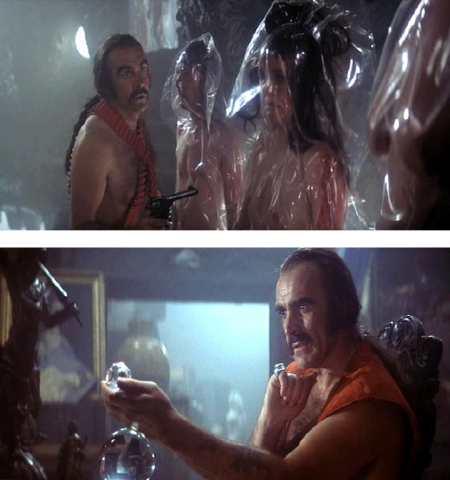 It turns out that the stone head comes from the Vortex, writer-director John Boorman’s version of the Emerald City, and the giant stone head is just as phony as the great mask used by The Wizard of Oz (1939). The unlikely Dorothy in this scenario is Sean Connery as Zed, toughest of all the Exterminators – his whole body is a weapon, albeit a slightly pudgy one, looking not unlike Sancho Panza in red diapers. 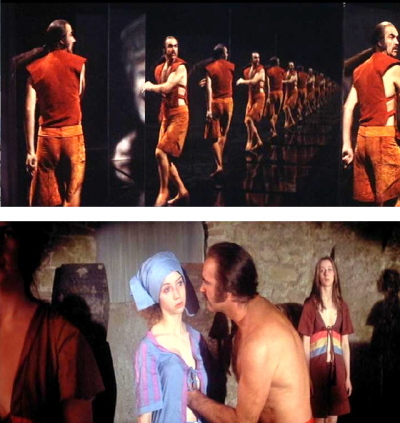 He travels in the head to the Vortex, where he finds impotent Eternals, Renegades doomed to eternal old age, Apathetics who wish they were dead, women who need Zed for breeding purposes, and a crystal repository of all human knowledge called Tabernacle, which tells us it is the year 2293 and that civilisation has collapsed with mankind splitting into two wildly different factions. Living a semi-blissfull but stagnant existence in a lush green country town known as the Vortex are the immortal Eternals. A largely matriarchal society, the Eternals consists of a group of spunky women and weak, rather effeminate men who dress in the height of seventies blousey bare midriff gear, and generally just swank around looking all high-and-mighty. 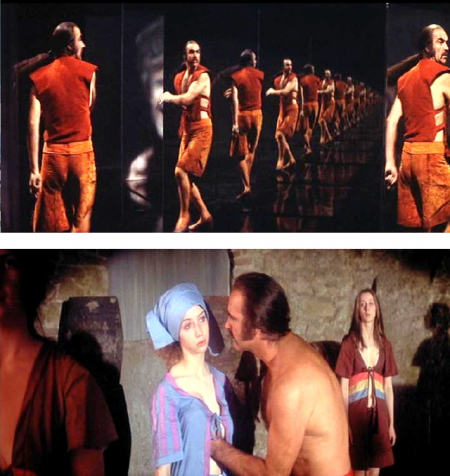 Zed’s unadulterated machismo causes most of the women in the Vortex to turn to jelly. Repulsed yet more than a little excited, the Eternals seek to discover what causes Zed’s frequent erections. Showing him images of breasts on a large screen fails to arouse this epitome of virility, but when Zed gazes into Charlotte Rampling‘s eyes – schwing! – the erection-monitoring device nearly melts. Zed is essentially an innocent monster in this sophisticated decadent world of high technology and, by the end, he exultantly destroys it in a prolonged fusillade of gunfire that is greeted with joy by the death-hungry Apathetics. Once an avenging angel and a truth-seeker, Zed now becomes a liberator, a slave who is able to free his master, and will eventually become ‘Adam’ to Charlotte Rampling’s ‘Eve’. 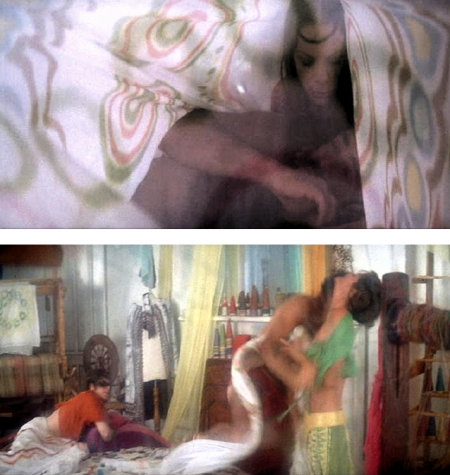 Boorman mistakenly takes too long to let us know who Zed is, because we are trying to learn about an alien environment and its people through a character who is alien to us – it’s like doing a science experiment with two variables. We become helplessly bewildered trying to sort out Boorman’s themes: Too much technology will destroy the senses – turbulent change is preferable to stagnation – the doom that awaits all slave-holding societies – the natural superiority of women over men and that the obsolescence of sex will emancipate women and make men ineffectual. 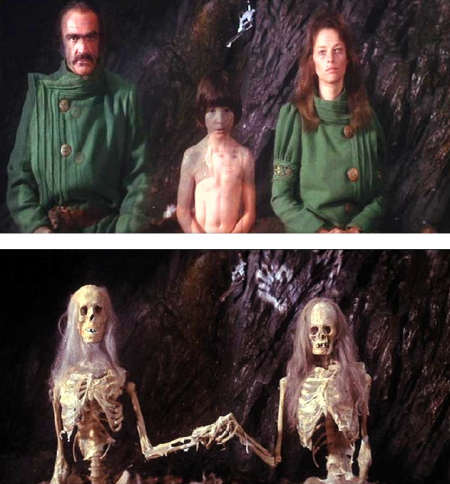 Although such themes are valid, the presentation is simply laughable. While Connery is doing double-takes, Boorman is taking the film far too seriously. It has all the hallmarks of poorly-produced epics, from the horrible costumes and cheap props, to embarrassingly pretentious dialogue and terrible direction of the extras (everyone does exactly the same thing). All this complex material is incorporated into a story with some good images (and many forced ones) and a curiously gentle, luminous visual style photographed by Geoffrey Unsworth, all in misty pastels. I’ve offered advice to other directors in the past, some accept it, other don’t. I remember when I was playing Sean Connery’s body-double at the end of Zardoz. I told John Boorman not to have the remains of Charlotte Rampling seated next to me. “John,” I said, “It would imply we died at exactly the same time and that we somehow stayed seated together, undisturbed, for a very long time. Audiences will find that far-fetched and silly” I said. John laughed good-naturedly and confidently told me “After what I’ve already shown them in Zardoz, the silliness of this scene won’t even register!” But I dally-on… 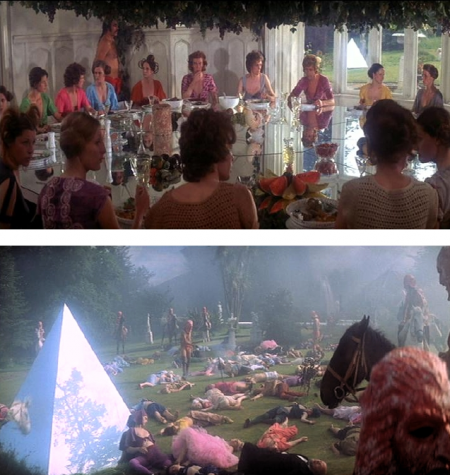 The bottom line is, Zardoz is a gravely flawed but nevertheless fascinating film. I leave you to ponder that point as I bid you a good night and look forward to your company next week when I have the opportunity to put goose-bumps on your goose-bumps with more ambient atmosphere so thick and chumpy you could carve it with a chainsaw, in yet another pants-filling fright-night for…Horror News! Toodles!