Uwe Boll graced his “fans” with not one but two youtube trailers for his upcoming feature films.

The first film is the third installment in the Bloodrayne series. This one has Rayne battling Nazis during World War II where she runs into nefarious Nazi Ekart Brand. Brand, played by Michael Paré, plans to inject Adolf Hitler with Rayne’s blood to make him immortal.

The second is BLUBBERELLA, an action comedy that follows the exploits of an overweight woman whose footsteps supposedly “cause explosions” and wields dual swords against anyone who dares make fun of her weight. Lindsay Hollister plays the Nazi battling Blubberella, and it appears that Uwe Boll is spoofing his own movies now as there are numerous vampire references in the trailer spouted from the mouths of the same actors who starred in the third Bloodrayne film. 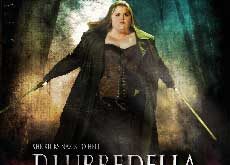