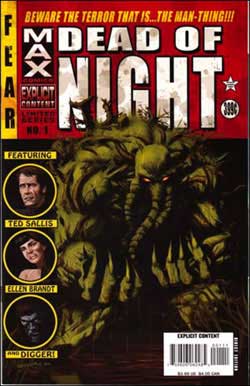 Ted Sallis lives in Citrusville Florida. Or at least he lived there when he was human. Ted is a renown Biologist/Chemist working to create something called ‘Operation Rebirth’ formula for Uncle Sam. It sadly goes all wrong as Ted finds out his testing has been compromised. Into the swamps Ted goes along with his test tubes filled with the formula after being shot and left for dead. He sinks to bottom of the swamps and with him goes all his years of testing. In a strange turn of events his experimenting and the swamp waters create something, unthinking, unholy, unspeakable- The Man-Thing!

This launch of the ‘Man-thing’ is in the vein (no pun intended) of the famous EC Comics from the 1950s. The comic is hosted by a creepy looking character named ‘Roderick Krupp’ who is the care taker of a cemetery, ala, ‘The Crypt Keeper’ from ‘Tales From The Crypt’.

In issue #1 Ted’s assistant, Erick Schist and his sexy female who we find out work for A.I.M. (“Advanced Idea Mechanics”). They are counter agents bent on stealing Ted Sallis’ formula which will up the stakes in the arms race. A confrontation occurs and Sallis is shot and falls into the swamps along with his test tubes of unstable, highly volatile formula. The marsh waters, teeming with life on its own and the bleeding Sallis help create the monstrous The Man-Thing.

As each (#2-4) issue moves along we encounter a wide range of evil that is there to bring trouble to nice people, who just seem to be camping or whatever in these bug infested swamps. The Man-Thing, now the watcher of all that are the swamps, polices the Citrusville Florida swamps and has the power to burn human flesh if that person is unworthy. Though, if you are of kind nature and the pure of heart you will not burn. So goes the tales of this muck monster.

The basic origin and premise of The Man-Thing is still very solid and if in the hands of a creative team talented enough they could have done wonders with this mini-series. Sadly, it’s overly commercial and that means it would have been better if it was on the “Sci-Fi Channel” as a TV show, for this kind of fare seems to thrive on that TV network.

Roberto Aguirre-Sacasa does an O.K. “9:00 to 5:00” job on the story. It’s solid, thought it really doesn’t bring anything new to the ‘Man-Thing’ mythos, aside from the usual antics he specializes in (observes killers, burns the faces of evil, and lives in the Florida swamps). The artist in issue #1, simply listed as ‘Kano’ is by far the best of all four issues. He has a very natural style and it works great for horror. Brian Denham in #2 and Javier Saltares in #3/4 are nothing more than glorified and boring super-hero artists stuck working in a genre they don’t understand. This rather high priced comic kind of reminds me of a ‘showcase’ of talent comic, where new artists can prove they’re creditable freelancers. 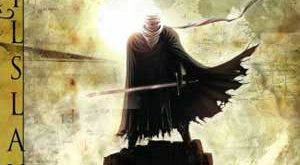