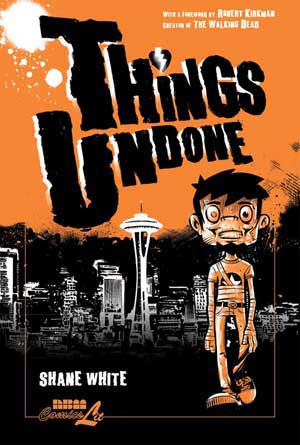 Rick Is frustrated with the drudgery of the day to day. He can’t seem to get along with his co-workers, he can’t seem to fit in the way he’s expected and he has grown weary of the corporate buddy system. While these things are isolated to this story I’m sure alot of what he’s going thru is shared by readers as a common issue in their lives. As it narrates, he tries relocation, different jobs, different girlfriends but with all of it he is deeply unsatisfied to the point of losing his mind.

Pressures build as all the weigh of the world seems to bear his shoulders.

Add to that a troublesome relationship. His first relationship with Cindy soon becomes a thing of the past when he seemingly falls right back into another relationship with new hire Natalie. The book details much of his life and his current frustrations that get added to his fragile existence he is trying to cope with.

The interesting thing about this story is that it takes the literal and fantastical and mixes them together pretty seamlessly. In several frames Rick looses an eye, breaks off his foot, is stabbed, cracks off a finger and is presented in the same literal state of a zombie as the way he generally feels. In the cartoon universe we aren’t really sure if this is reality or fantasy but it goes on pretty often. The physical state of Rick reflects his emotional state which is more or less coming to a head sooner than later.

The story while mostly linear jumps forward and back a few times to set the chain of events throughout his life. Rick is presented as a victim. Though we often wonder if the victim is just from his inability to cope in a world that operates a certain way. Violence is ramped up a step to more literal scenes that are also shared in his fantasy world. The sight of his annoying boss dating his ex gets to be too much to bear and Rick loses control on the world he is forced to deal with. As he approaches the guin shop, we wonder what steps will follow and how Rick will deal with his emotional state

Art within is magnifically illustrated by author and artist Shane White. His pen and ink work is bold, inventive and carries a tone of retro. The edition which is a 2 color book is presented in a unusual display of black and orange. Though I have to say I really dig it. The tones are accented more than if they would of just went with grayscale so it keeps it pretty visually entertaining. The book features a sturdy cover with thick matte white pages within. I found the story highly entertaining and well written with a flair for dramatics. Great stuff from the NBM team.