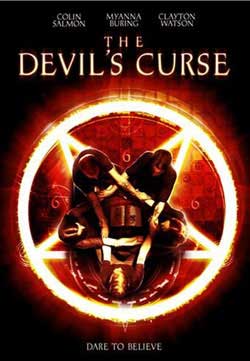 Several theological students summon a hellish demon in an experiment to test their own faith — and end up paying a severe price in the process. Ten years later, the curse lives on as five students move into the abandoned residence hall of the Catholic school. But what was supposed to be a larkish weekend stay turns deadly when the kids realize they are not alone. Toni Harman directs this supernatural horror-thriller set in London.

By the original title of Credo, our film “The Devil’s Curse” has all the creepiness of a cold breeze in the dark or the feeling of someone standing behind you. This latest thriller filmed entirely in London England is a surprise for the horror genre that bases much of its styles on visuals. Devils curse in many ways is a re-visit to the old ways of horror films with its low budget intensity without flair.

The students are at it again! Ten years ago a group of 5 students thought it ok to d*ck around with the forces of darkness and summon a demon. All being students of philosophy, they had the need to understand the devil and so with callous effort formed a 5 star pentagram holding hands while performing a ritual. Before completion, Seth backs out and unleashes a dark force by breaking the circle. Come morning, all left in that room were found dead per way of suicide. Seth survives but stays on to guard others who may wander in carelessly.

Years later with the dorm being closed down due to the incident. We have a new group of students who have found themselves homeless due to too much partying. In efforts to avoid the park benches, they get a lead on this closed down abandoned dorm that they can take residence in for the mean time. Not a good idea though as the evil never left.

This all sets the tone for the film set in London and directed by Toni Harmon. the resident demon “Belial” who preys on others by using trickery to get them to commit suicide in turn then taking over their souls. The phrase “seen and unseen” is mentioned many times in the movie which is exactly where our demon lives…in the unseen. with minimal efforts it is assumed many times that the demon is present. this assumption is key to the horror of “The Devil’s Curse” Our main focus “Alice” (MyAnna Buring) is a obsessed student who spends many the night studying till closing at the local library. As one of the who have taken residence she comes across as the strongest and most compassionate of here group. Her journey is still to come as the film unveils its intentions. The rest of the students contribute as an ensemble cast who joke, quarrel, play, insult and show a range of emotions depending on the incident or situation at hand.

Maybe its me, but something about theological students in London brings a certain class to the acting and feel of the movie. Predominantly cold, dark and dreary the strength of this film comes in that which you don’t’ see. By proper use of lighting, tone and music, the director has managed to pull off a pretty creepy film that really never shows you anything. The scare of this film is subtle but effective. It allows your mind to create the tension that never is really there. The dread feeling is always present and that is what works for “The Devil’s Curse”. By use of dialog, use of myth, use if decrepit location and use of sounds that seems to be enough to pull you in and keep you on till the end. Similar usage of dread was used in the film “Session 9” which also kept it simple but creepy. The average horror fan may feel somewhat cheated without FX, makeup and brutal assaults. Though really it not needed in this film. There is a definite feeling of dread in this film that gets under your skin much like the sound a of a door creeping closed in the dark.

Is this an A-list? I would say no, but it is effective on many levels. In the creation of film, it’s easy to get wrapped up in literal presentation and delivering on a visual level. What comes harder is to use just what you have and still make the audience believe in the presence of evil. For this attempt I give the film high points on achieving such a dryly unnerving effort. If your looking for scary film without much over the top, goriness or scary creatures, this film is my recommendation.