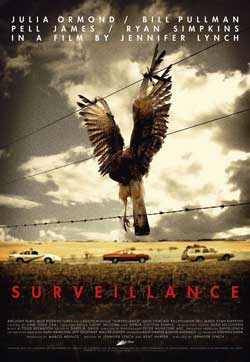 Talk about an intense intro, we aren’t 2 seconds into the film before a couple is being brutally murdered by 2 masked assailants. This sort of narrative is the style that the film Surveillance directed by Jennifer Chambers Lynch follows. Pieces come together through the reveals of the story which is also revealed from different perspectives of the child involved, the druggie witness and officer Jack Bennet.

A small town police operation welcomes in agents Halloway and Anderson who have arrived from the FBI to investigate the case. Greeted with some reluctance and jaded nature the agents begin to unravel the case through questioning and analysis. Our 2 FBI agents have been following the serial murders of this case for many months and have a vested interest. Though the local cops still tend to oblige in a half ass manner due to some sense of insecurity as capable police officers that don’t want to see there fire taken away. Michael Ironside is the chief of police who runs the station with a level only slightly more accommodating that his officers.

Agent Halloway played by Bill Pullman is both intelligent and peculiar. In fact, I swear I saw a bit of his “Zero Effect” persona creep in now and then. Agent Anderson (Julia Ormond) is his capable partner who despite being a female can handle her own in the face of a mostly male dominated profession of law enforcement. They come across with a focus on the issues at hand often ignoring the trivial questions and remarks that they encounter in dealing with non professionals.

The story unfolds mostly through the interrogation of the 2 witnesses and the remaining police officer of the scene. In fact Agent Hallowway runs the interrogation per 3 viewing screens so he can see all at the same time. Meanwhile the station police makes jokes, gripe and seemingly make the whole thing more difficult that it should be. We almost instill a sense of hating the good guys before they get a chance to shine.

This is when a substory starts to take on its portion of the film. The cops Jack Bennet and Jim Conrad (French Stewart) spend most of there time shooting out tires as passerby’s speed by for entertainment and for kicks. As they approach the now flat tire vehicles they play mind games with the passengers by passing the day with threats, violence and a bit of power play intimidation. Whatever story was in process is shunned in favor of these crooked cops behavior. A change of perspective goes into effect providing terror per way of those who are supposed to save the day but take on there own persona of evil. Meanwhile the real threat of these 2 serial killers is further down the highway awaiting to make its grand entrance. A marvelous play on story telling as told by the writers Jennifer Chambers Lynch and Kent Harper

Back at the station all is going as planned, trying to uncover the truths of the matters. Though like a ton of bricks there’s more of a story to present that will catch you for a spin. This is the style and essence of the film. A non-linear play on a crime mystery, a wave of psychotics and a look at police enforcement with a backwoods midwestern crooked process in effect. Alot comes served pretty unexpected which is why this is such a great film.

Surveillance is a thriller and crime drama that tells a story with a certain eye of detail that leaves much to the viewer to ride along with as its being told. Jennifer Chambers Lynch proves she has the directors eye that directly rubs from her fathers mind set but with a talent for the masses. Cleverly told and still visceral in many regards it has the makings of a artful horror tale. A remarkable film that brings its horror in much different ways than a straight serial killer style movie. Boldly impressive that kicks a mean evil punch!!