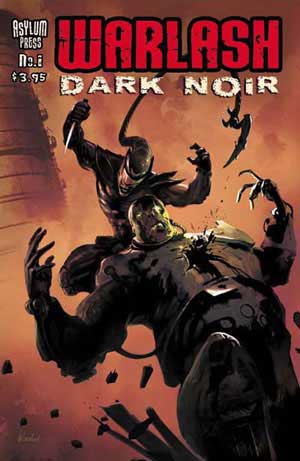 Warlash is somewhat of a warrior, policeman, defender and all around bad ass. His tales usually consist of taking out demons and monster scum that cross his path. His weapons of choice being his razor sharp scorpion tail that protrudes from the back of his helmet and his arsenal of guns and knifes. This issue contains 4 tales of his adventures. The color work is it’s usual popping presentation as seen in the asylum press releases and the pen and pencil work is pretty kick ass!

I love a simple concept to help mix in with some of the more thought inducing reads I go through. Warlash is exactly that. A balls out visit to chaos on the streets and anything that comes into Warlash’s world. The first 2 stories features worm creatures. The first a transformed scientist that seems to enjoy his newly deformed organic monster body that lives among the scum of the earth and feeds on humans. Perhaps its his all powerful godlike abilities to morph and tangle about, but this adversary is gives Warlash a run for his money. Warlash the all confident dark hero flinches only slightly but as usual overcomes and slices away. I kept envisioning the film “From Beyond” in the monster facial appearances which were creepy and yet very much human feature designed.

The stories are ongoing so we don’t get to see an ending but rather a wait till next issue anticipation. The 2nd tale is more about electronic worms kind of like what you’d see in he movie “Tremors”. The scenarios presented are much of the strike for strike kind of exchange, monster attacks, Warlash counter attacks. Now this 3rd story caught ny eye right away, in my usual quick flip througs. For one the creature called “Azagoth” may be one the coolest looking demons I’ve seen in while, at least since some of the “Spawn” demon characters. Also the story sets it up for more confrontations in the future , which means this demon will be making an appearance down the road. Maybe its just me, but I really enjoy the old hellions from below confrontations as they are able to introduce the worst of the worst from hell’s depths. I don’t think Warlash is able to overpower these creatures, he just happens to be smarter at taking them out. His overconfident nature I’m guessing also helps to fuel that fact. Our 4th tale is B&W and plunges intro the sexual underground with a scum bag who like to spread his disease whereever he can. Apparently he is also able to morph a bit to hide this fact till he’s ready. Blaming the whores of the world, he seems bent on vengeance for his disfigurative state.

The art style within are best described as very rich in detail and colors. I appreciate the fact that it swaps out for drawn to painted to pen and ink. A nice variety to sort out the different stories.

The writing is very appropriate for the artwork inside. We learn to love this Warlash character as the demon-ass kicker he is. At this point much is not know about why and where he came from, however its my assumption that will be revealed if not already in a previous issue. Final words? I dig the hell out of the Warlash comics. As much as I’m a old school “Doom” video game player, Warlash gives you that kind of feel on paper. Seek out the monsters, rip there heads off and move on to the next adventures. A creepy-coolness within! 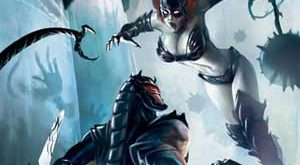 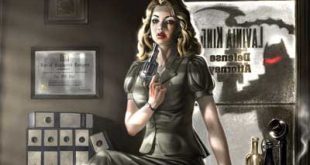