“YOU WON’T BE ABLE TO LOOK AWAY”
– THE ATLANTIC 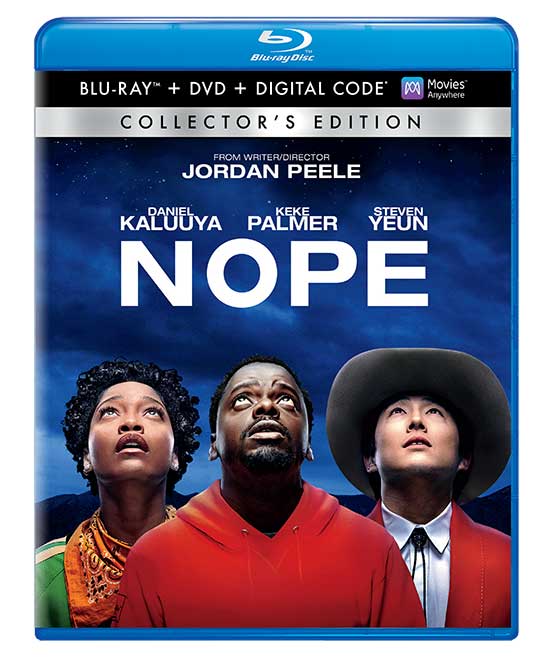 Oscar®-winning filmmaker Jordan Peele (Get Out, Us) unleashes his latest spine-tingling thriller with NOPE, a mysterious sci-fi pop nightmare available to own for the first time as a Collector’s Edition on Digital September 20, 2022 and on 4K Ultra HD, Blu-ray™ and DVD on October 25, 2022 from Universal Pictures Home Entertainment. Certified Fresh on Rotten Tomatoes, this “spellbinder that keeps pushing boundaries” (Peter Travers, ABC News) will have you never looking at clouds the same way ever again. The exclusive Collector’s Edition comes filled with more than 90 minutes of never-before-seen bonus content, including a revealing documentary that dives deep into the film’s rich DNA and Peele’s extraordinary vision; an exploration into the conception, design and execution of entity “Jean Jacket”; deleted scenes, a gag reel and more taking audiences behind the scenes of the out-of-this-world adventure.

Jordan Peele reimagines the summer movie with NOPE, an expansive epic of uncanny science fiction. Following their father’s shocking death, Hollywood animal wrangler OJ (Kaluuya) and his sister Emerald (Palmer) begin observing unexplained phenomena on their vast Southern California ranch that leads them down an obsessive rabbit hole as they plot attempts to capture the mystery on camera. Along with a former child star turned family theme park ringmaster (Yeun) who neighbors the siblings, the pair’s efforts to chase the spectacle soon bring terrifying consequences and unimaginable horror. The result is a complex social thriller that unpacks the seeds of violence, risk and opportunism that are inseparable from the romanticized history of the American West … and from show business itself.

With the purchase of NOPE on digital or disc, fans are eligible to earn points towards digital movies via the Universal All-Access Rewards program. Members can redeem their points for digital movies, swag and more!  For registration and details please visit www.MyUniversalRewards.com.