Home | News | Back To The Future Vs Knight Rider! The incredible new set from SCALEXTRIC is a must-have gift this Christmas

Back To The Future Vs Knight Rider! The incredible new set from SCALEXTRIC is a must-have gift this Christmas 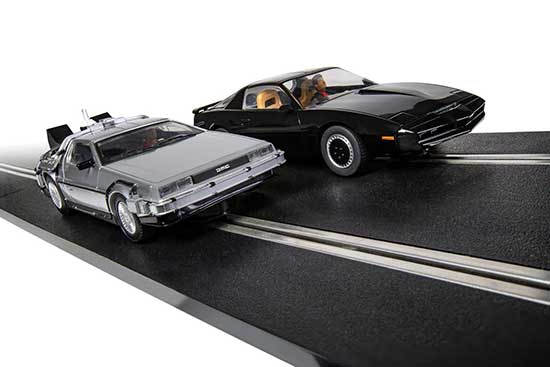 Race the Knight Rider against the classic Back To The Future Time Machine in this incredible new set from Scalextric – a must-have gift for this Christmas!

8th Sept 2022, Margate, UK: Get ready for the latest Scalextric battle with the brand new Back to the Future vs Knight Rider Race Set. Buckle up as the iconic Michael Knight racing K.I.T.T or imagine travelling in the Back to the Future Time Machine as Doc or Marty McFly. Combining stylish retro Scalextric branding with the superbly detailed film-inspired vehicles rigged with cool new functions, the set is packed with an array of amazing features and some seriously fun surprises. 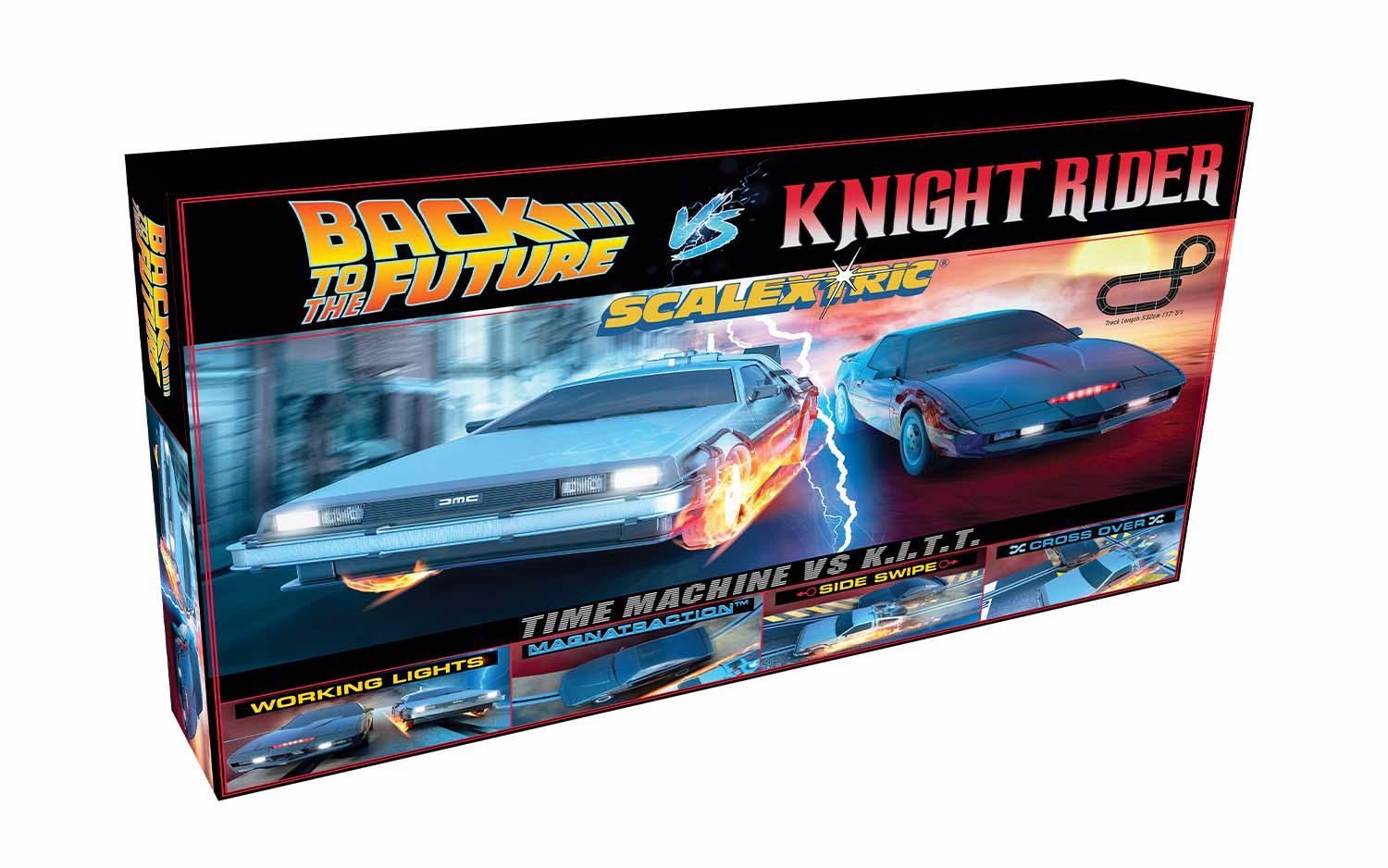 In the Back to the Future vs Knight Rider Race Set, the sleek and sturdy Time Machine has a working flux capacitor and front and rear lights, while K.I.T.T comes to life with iconic pulsing red strobe light on the front of the car – meaning head-to-head racing long after bedtime. 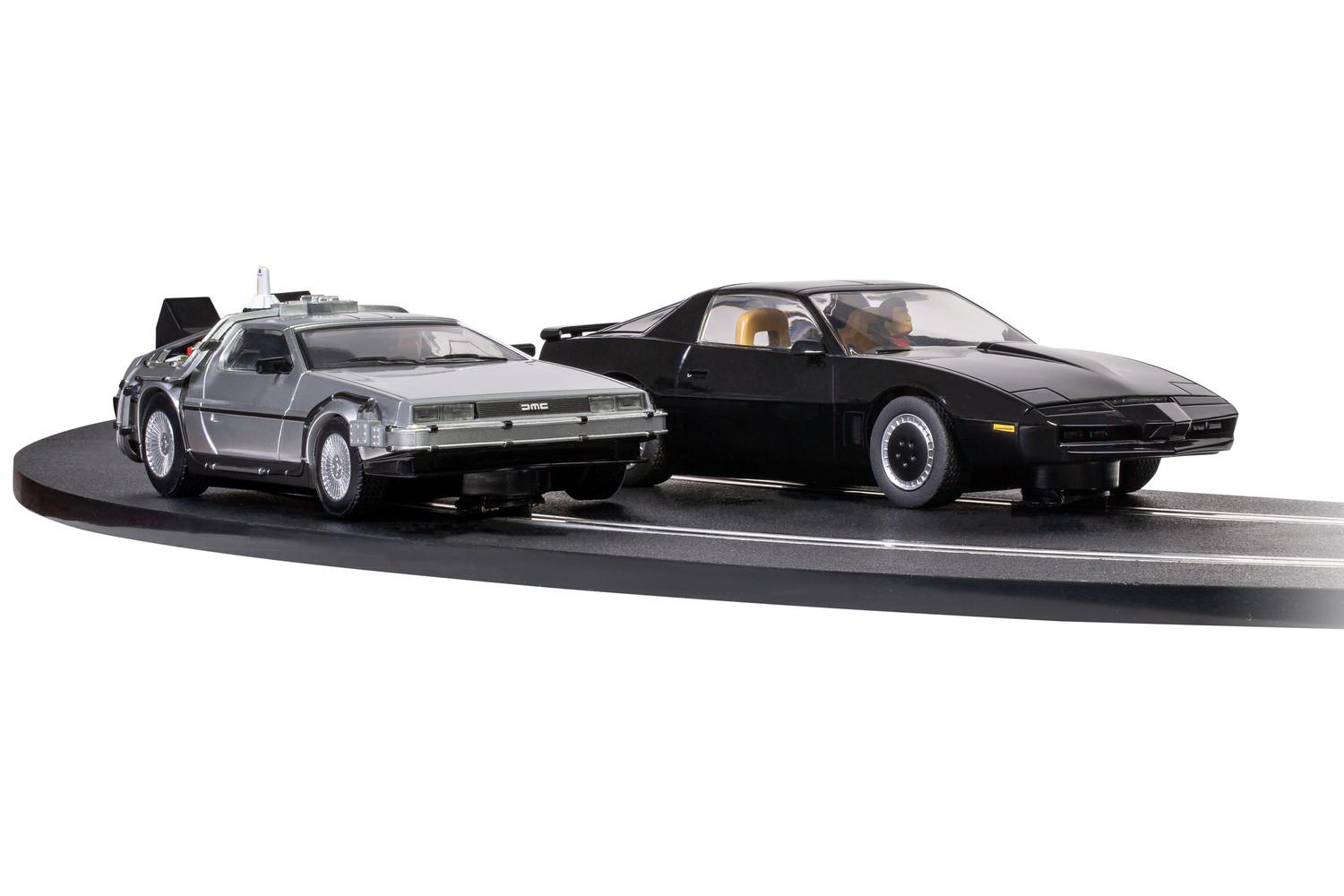 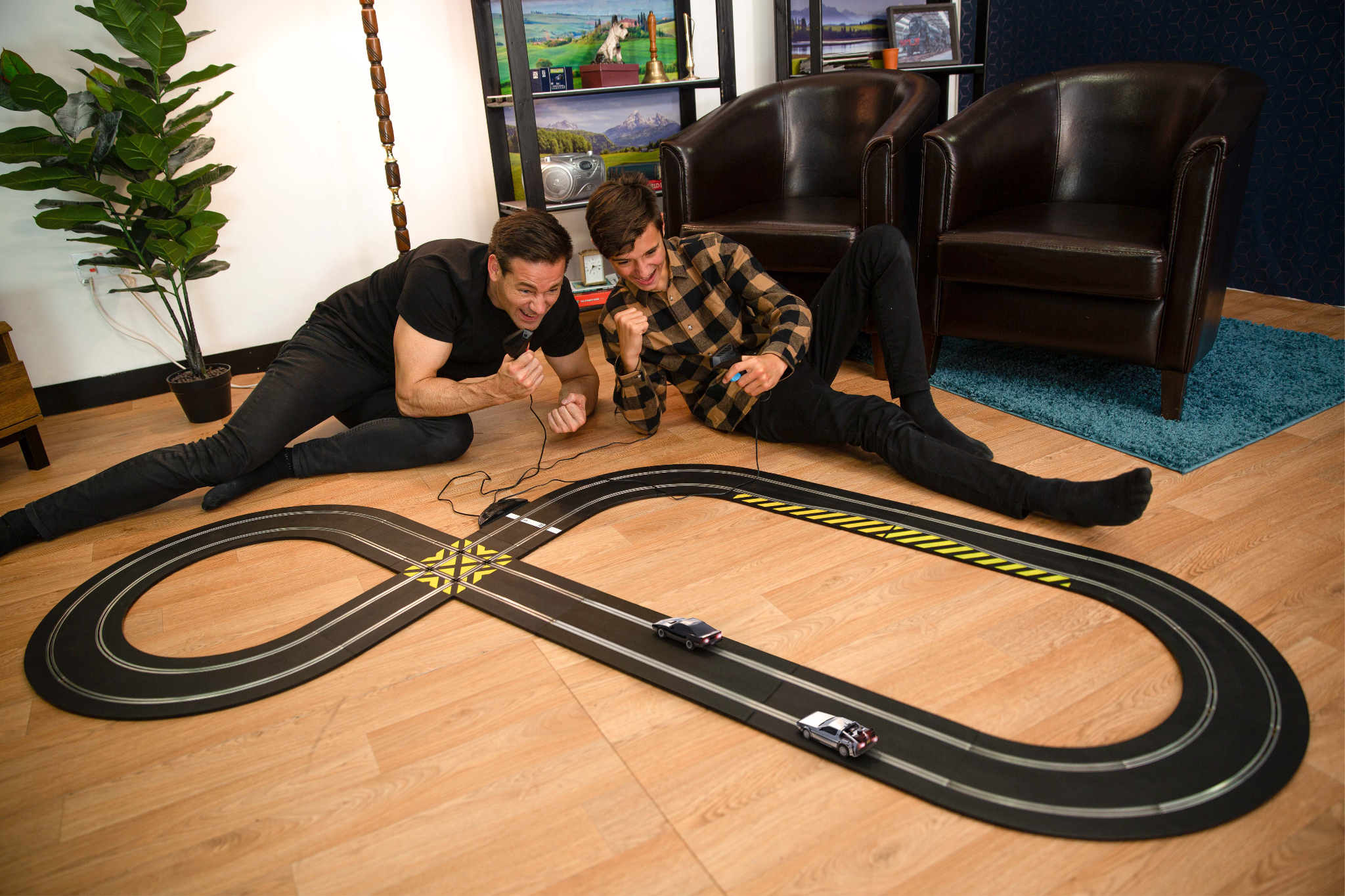 The patented magnatraction system helps the car to stay on the track, with powerful magnets in the chassis provide extra traction and downforce, reducing the amount of skidding and crashing; take the opportunity to knock your opponent off the track or try to avoid a side-on collision at the two straight hairpin track side swipe; finally, dodge the ‘danger zone’ to avoid full impact or try to knock your opponent off the track at the dual lane crossover with yellow chevrons! 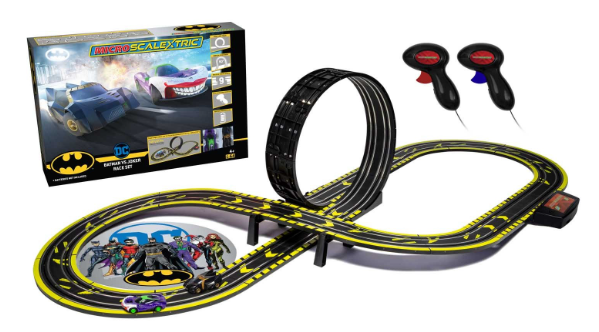 In the Batman vs Joker battery-operated Micro Scalextric set the Caped Crusader takes on the Clown Prince of Crime himself. Featuring two character cars modelled on Batman and the Joker, this set features over four metres of track, with 9 track layouts which include a loop-the-loop and a half pipe. 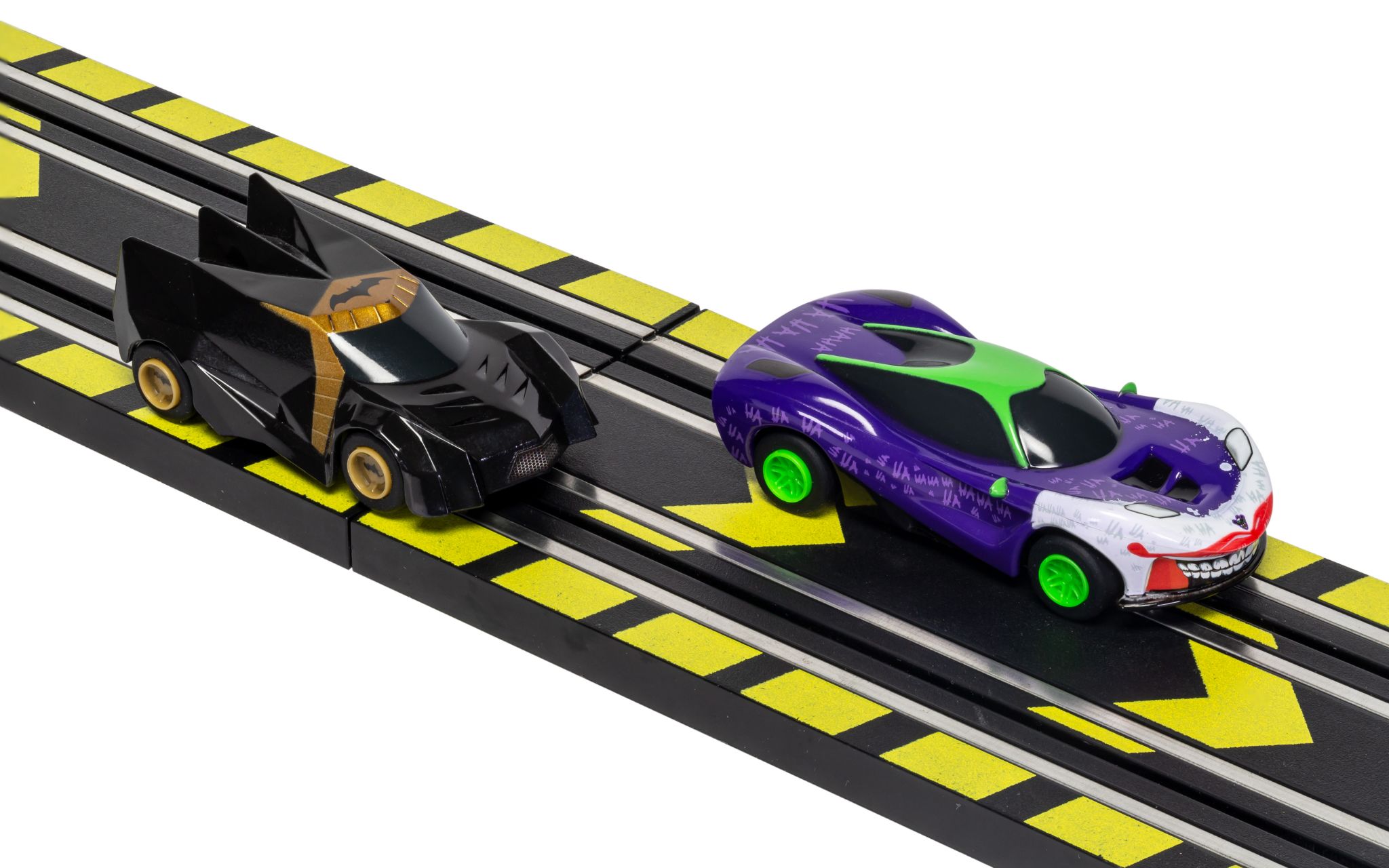 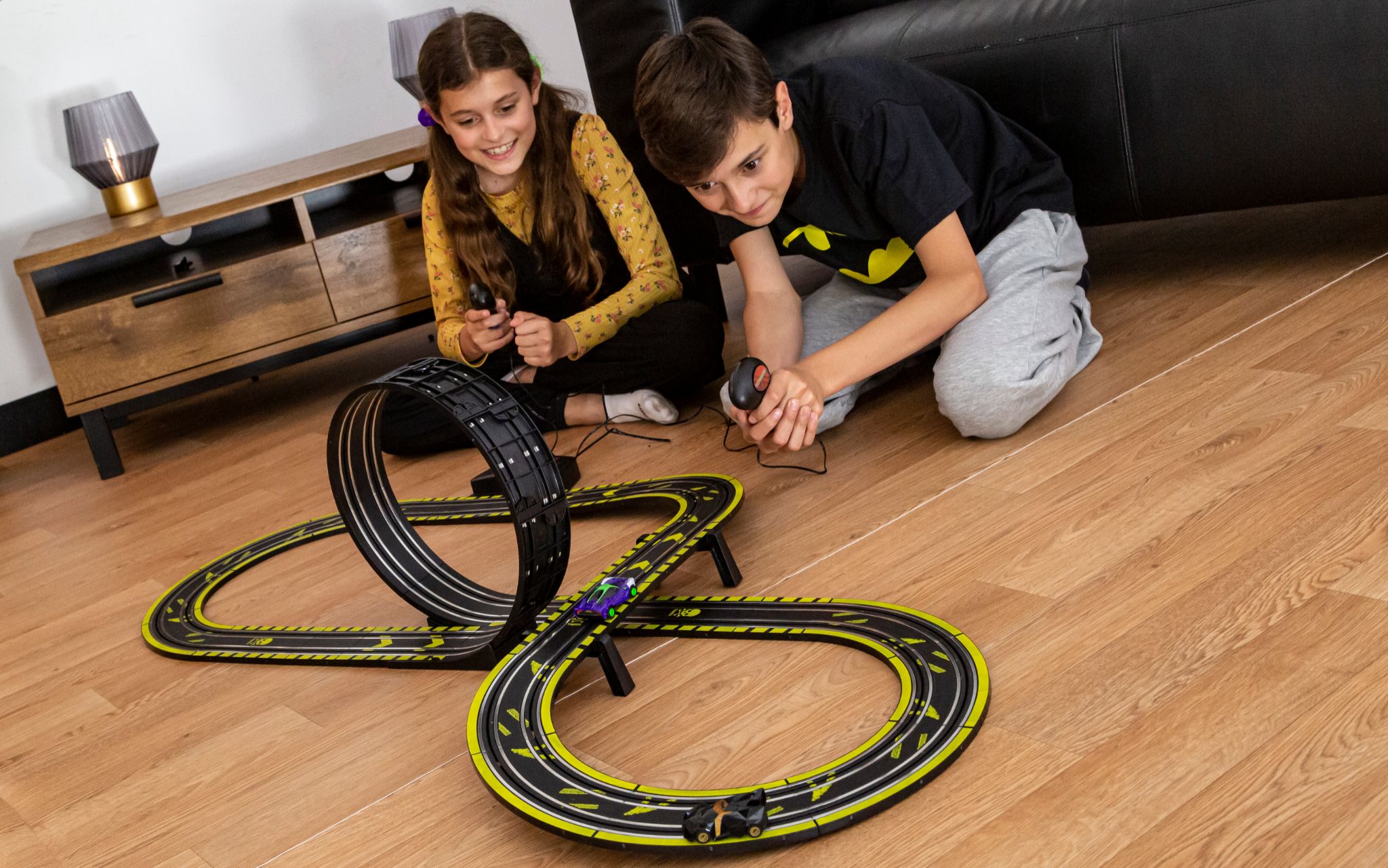 PLEASE GET IN CONTACT WITH REVIEW AND GIVEAWAY REQUESTS

A BRIEF HISTORY OF SCALEXTRIC

In 1982, an independent company was formed – Hornby Hobbies Ltd (later Hornby Plc) – and during the late-1990s production of Scalextric was transferred to China. The accuracy and detailing of today’s Scalextric models remain second to none.

As the world turned evermore to digital technology, Scalextric was not to be left behind and in 2004 introduced its first fully digital racing set (multi-car racing with lane changing functionality). Scalextric SportWorld was also introduced to allow racers the ability to hook their Scalextric sets up to the internet to create a global community through on-line racing.

Today Scalextric offers a slot car system for all ages. For the younger driver there is ‘My First Scalextric’ which is an easy assemble and operate 1:64 scale track system, this is followed by Micro Scalextric which uses the same track system but with larger layout options including special track features. Then for the more experienced racer there is the commonly recognised and loved traditional 1:32 track system which offers a multitude of car, track and accessory options. More recent developments include ARC, a Scalextric App based race management program and Spark Plug which offers the chance to control your Scalextric Car with your phone or tablet.