Monster-Mania 50. What a great convention. It was fun attending the Q&As with Greg Nicotero, Zach Galligan, and Debra S. Hayes. Over the years I have attended quite a few conventions and horror-related events. Monster-Mania has become more than just a convention, it’s a reunion spot to catch up with friends that you may not get to see all the time. It’s a place to have fun and meet new friends, and check out all the amazing celebrities, the vendors, and all the cosplay characters. The main headliners this year were from Alien, Scream, and Halloween 2.

The guests included David Arquette, Matthew Lillard who is a fan favorite. His role as Stu in Scream has become iconic. His role as Shaggy in Scooby-Doo brought out the Scooby fans too. Jamie Kennedy who portrayed Randy in Scream, he holds the rules for the scary movies. Jamie Kennedy is fun to talk to. W. Earl Brown, Lee Waddell who was Ghostface in Scream 1 and Scream 2. Ralph Macchio, Doug Bradley, Dick Warlock, Lance Guest, Leo Rossi, Greg Nicotero, infamous director, special effects, make-up effects and more. He held a Q&A on the second floor, and it was packed. 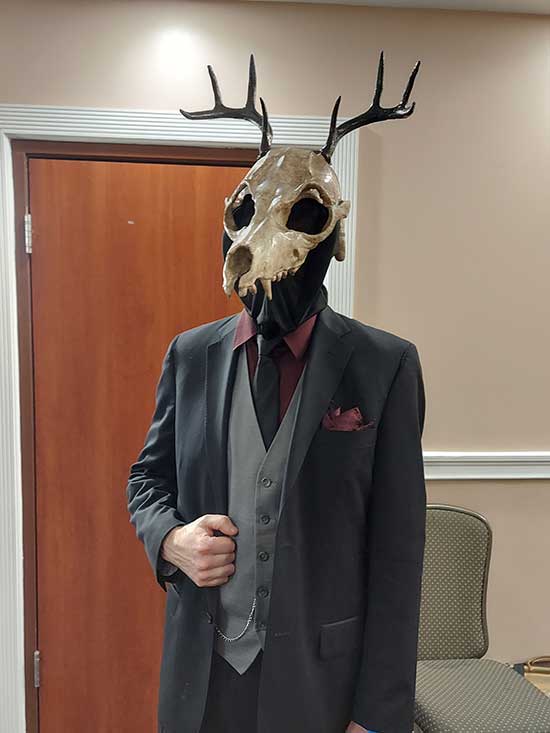 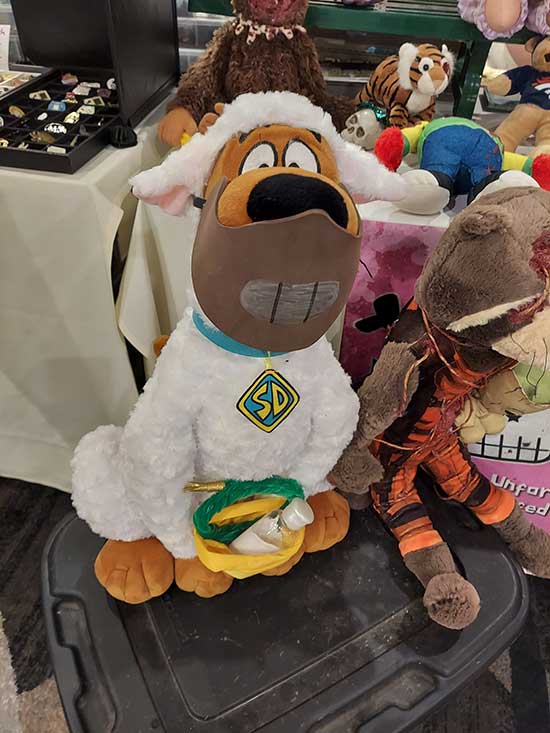 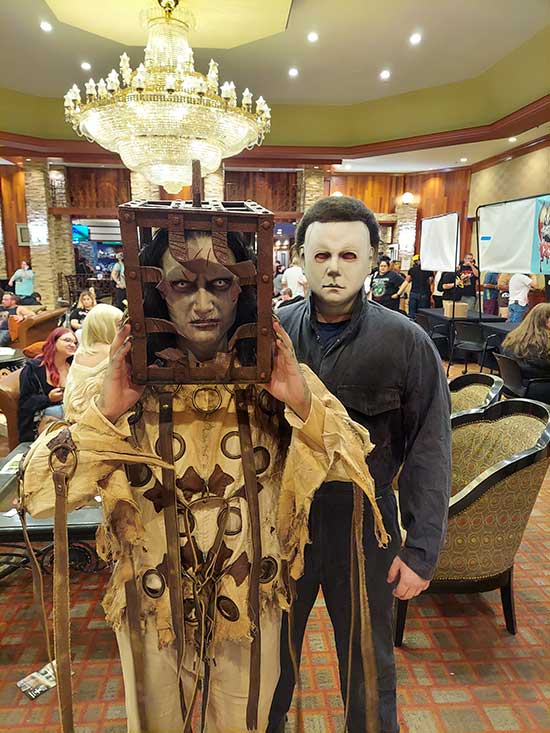 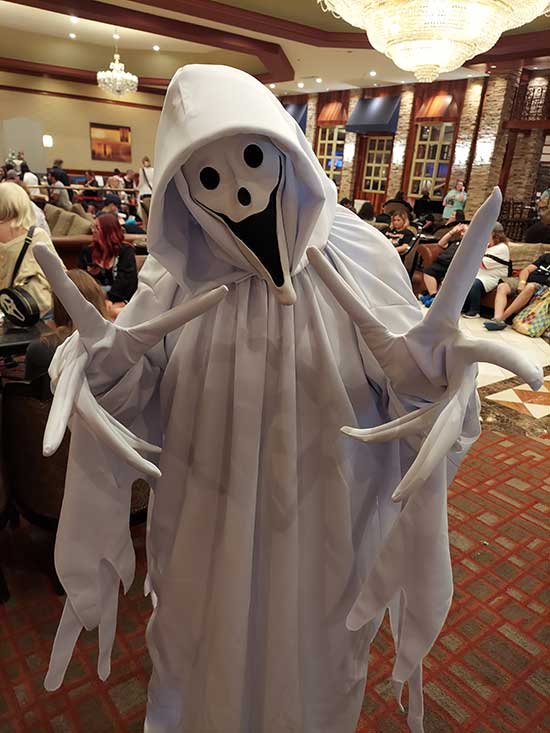 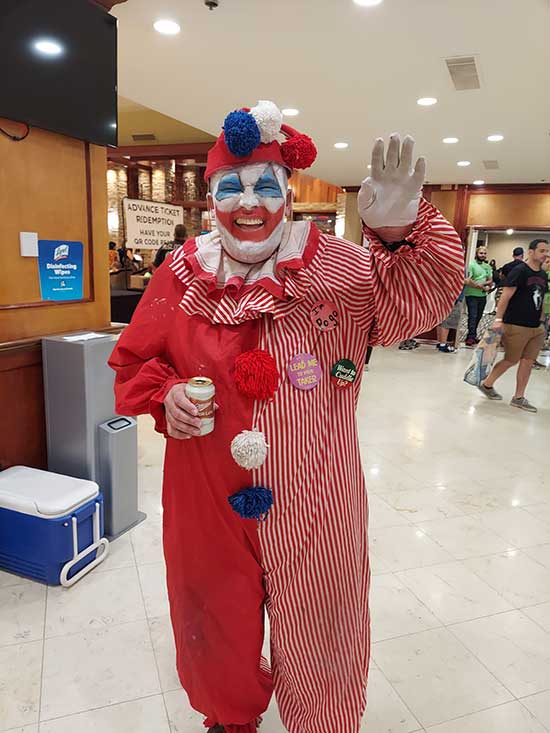 Gary Busey, Julie Benz, Debra S. Hayes who portrayed Claudette in Friday the 13th attended her first ever horror convention. I also attended her Q&A panel and she said, she didn’t know Claudette had such a fan base. She said she would not have known if not for her nieces and nephews who send her the memes around every Friday the 13th. She was great to talk with and so kind.

The one and only Lance Henriksen from Alien, Near Dar, The Terminator, Tales from the Crypt. Tom Skerritt Alien, Top Gun, Poltergeist 3, Contact, The Devil’s Rain and more. The Alien reunion was ICONIC and needs to happen again. Jenette Goldstein, this was her first Monster-Mania appearance. Jenette was in Alien, Near Dark, Lethal Weapon 2, and more. Mark Rolston, The AMAZING Veronica Cartwright, Carrie Henn.

Kane Hodder was in attendance and doing In-Costume Photo-ops. Kane is a staple in the horror community starring in everything from Friday the 13th Jason Takes Manhattan, Jason X, Frozen, Hatchet, B.T.K., Fear Clinic, 2001 Maniacs, Wishmaster, and more. Danielle Harris, Zach Galligan from Gremlins, Hatchet 3, Warlock: The Armageddon, Hellraiser 3, Star Trek Voyager, Infested, and more. I went to Zach Galligan’s Q&A, and he spoke about everything from if there will be a Gremlins part three, and the new series coming out related to Gremlins. 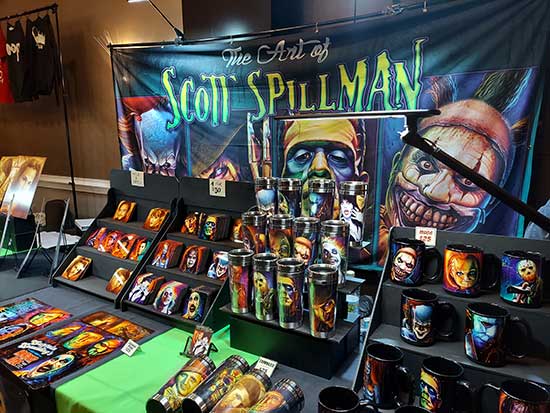 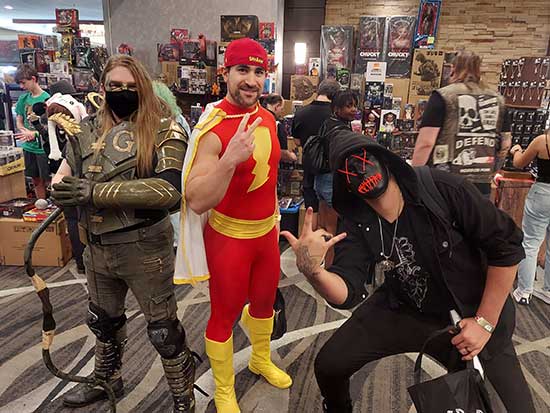 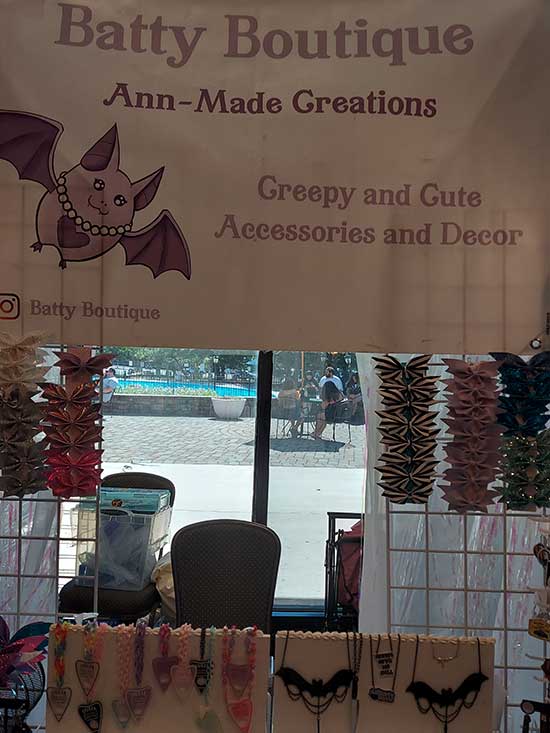 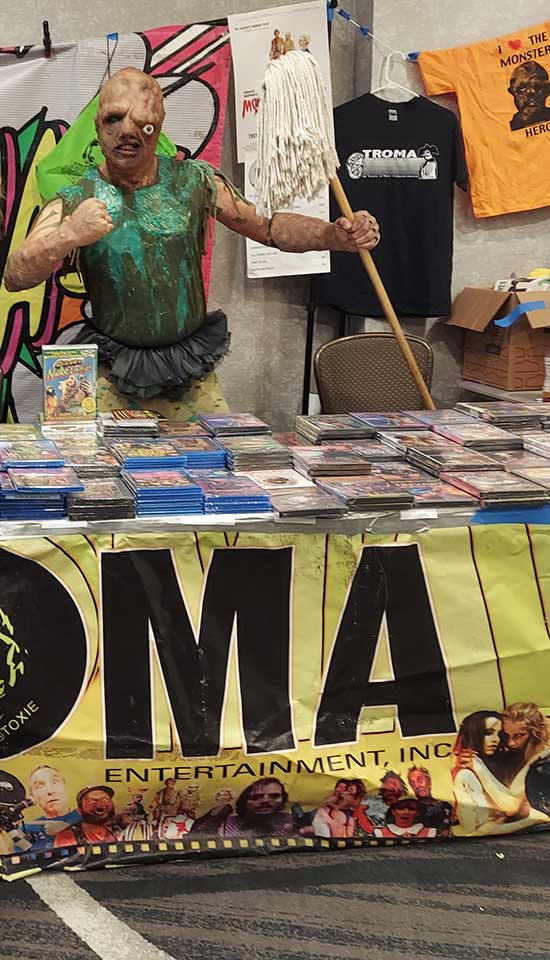 Lynn Eastman-Rossi, Kim Coates, Eugene Clark who portrayed Big Daddy in George A. Romero’s Land of the Dead, he was still at his table when I finally got to the room and he said he needed to stretch after standing and then sitting for a while. So, as fans came in and out, there was nothing to see except the amazingly talented Eugene Clark stretching.

Steve Nappe was sitting with Kane Hodder, also Dick Warlock walked over from his table to visit Kane Hodder. It was pretty cool to see that. Steve Nappe has been in everything from Death House, Old 37, Check Point, and Room 9, Adam Scherr, Scott Jackson, Ken Haeser, Buz Hasson, and Blair Smith. They also did the Yogi Memorial and Yorkie Auction.

The vendor rooms were busy and packed as people searched for movies, collectibles, to get fangs made from Horror Show Jack, jewelry, bags, you name it they had it for sale. Vendors like Epitome of Evil, From Ashes to Empire, Unmasked, Fright-Rags, Stuff and Thangs.

Father Evil was in attendance with his family. He had quite the gathering and roamed around the venue as usual. He has truly built an amazing following and he is an inspiration with creating his character. Also, his neighbor is pretty cool, Chris Rowan who owns Buffalo Bill’s House: The Silence of the Lambs Filming Location was in attendance. So many talented people. 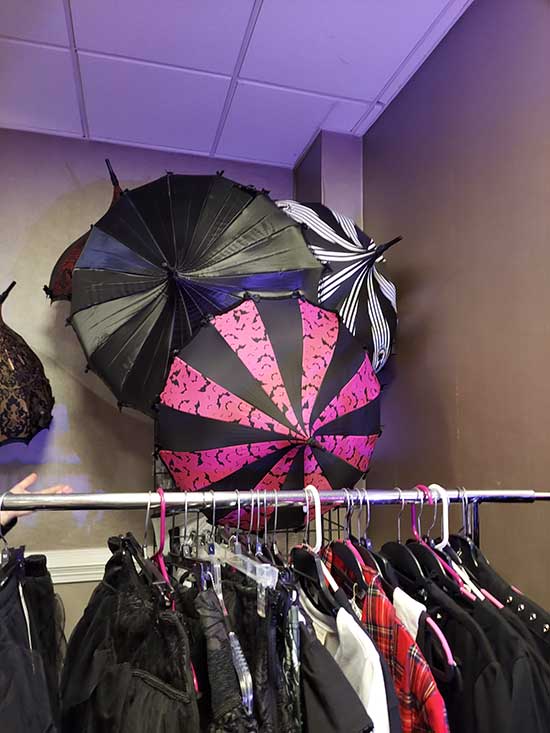 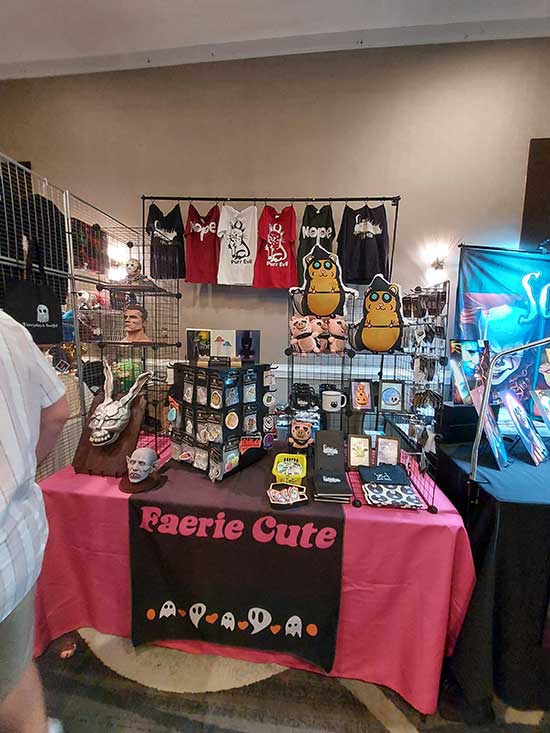 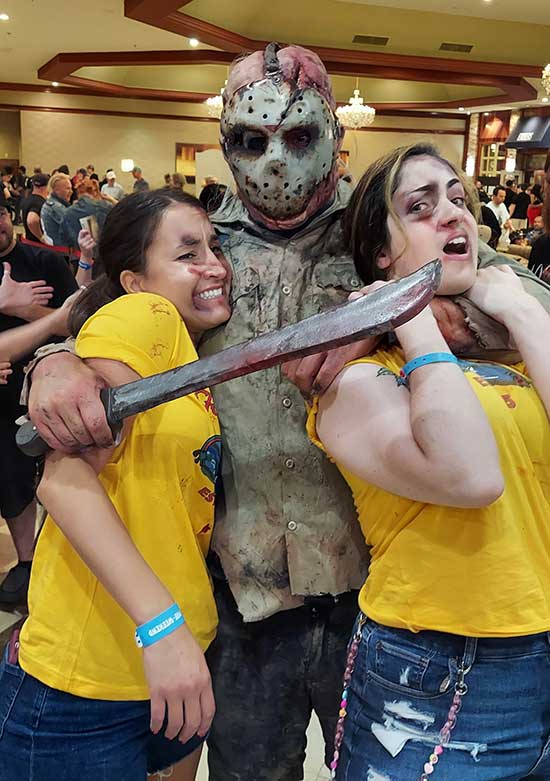 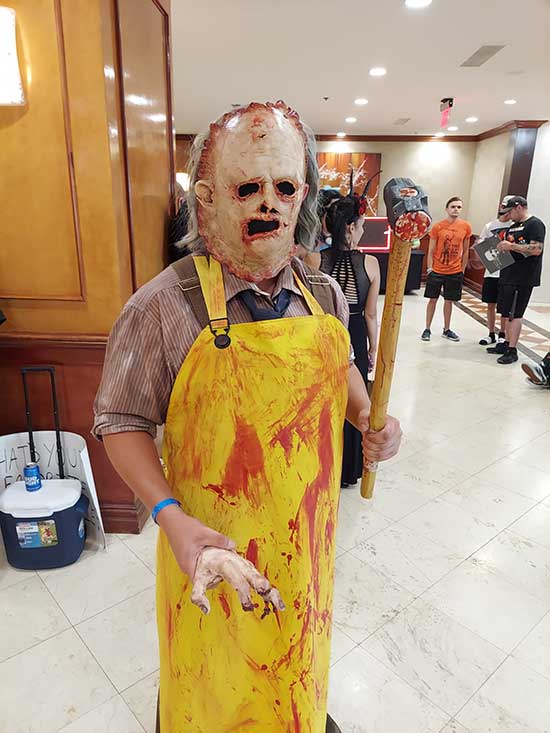 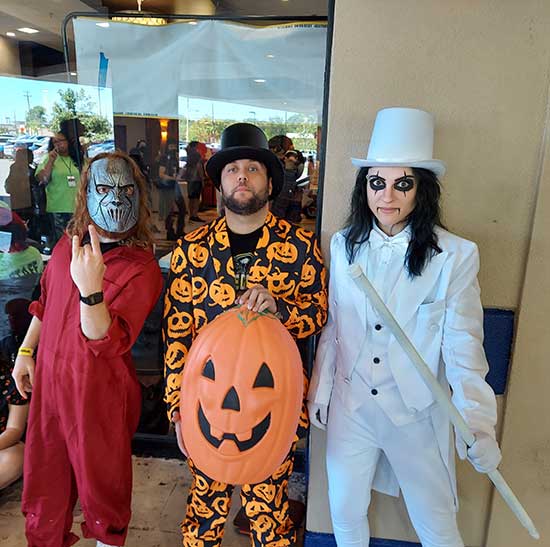 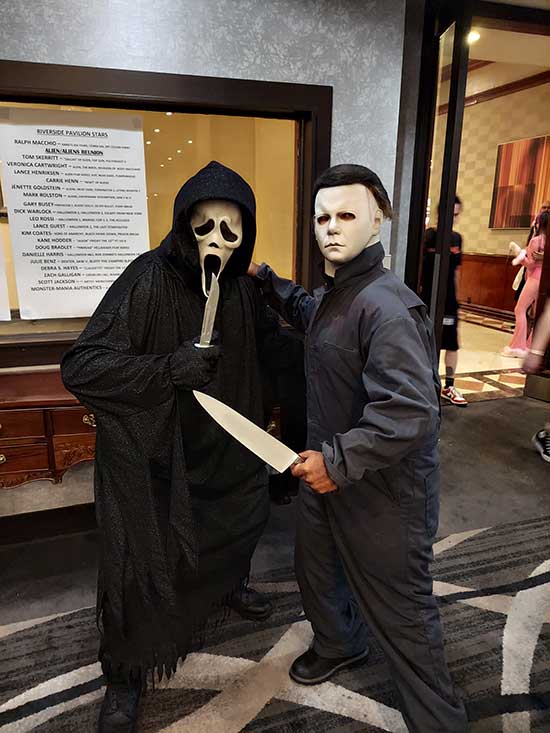 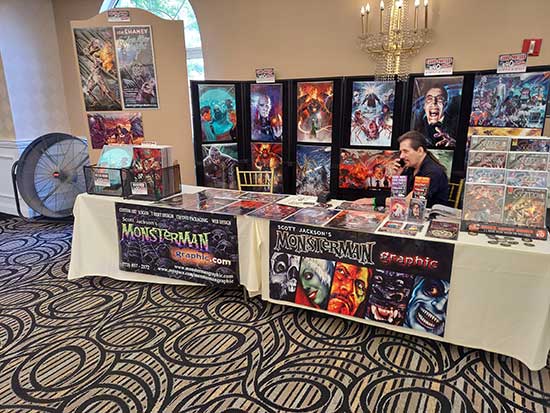 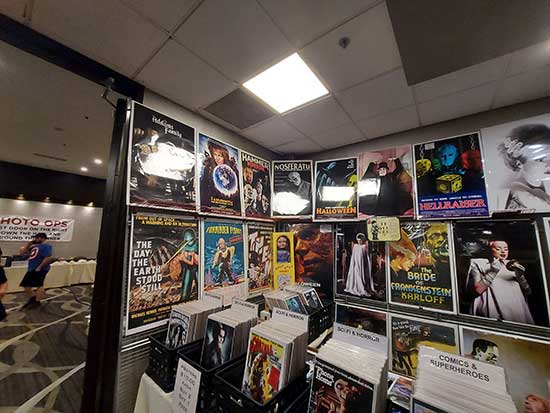 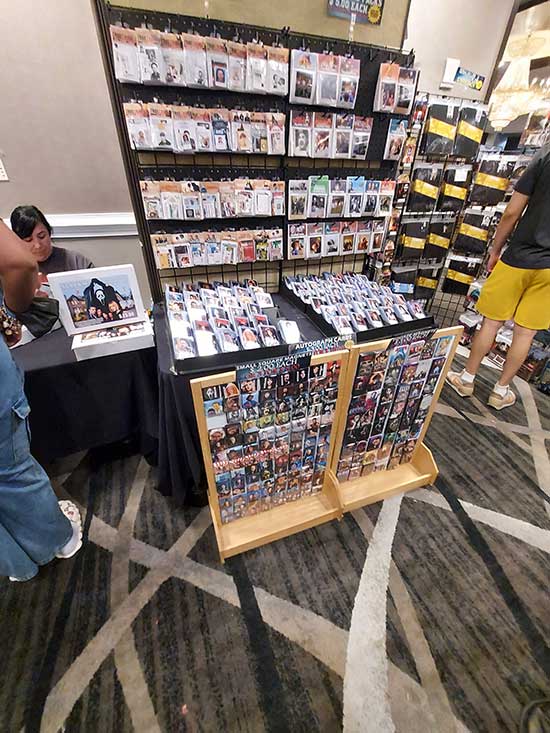 Monster-Mania is so much fun. Make sure to check it out if you get a chance.

I also ran into the awesome folks from PA Horror Con which will take place next weekend. pennsylvaniahorrorcon.com/