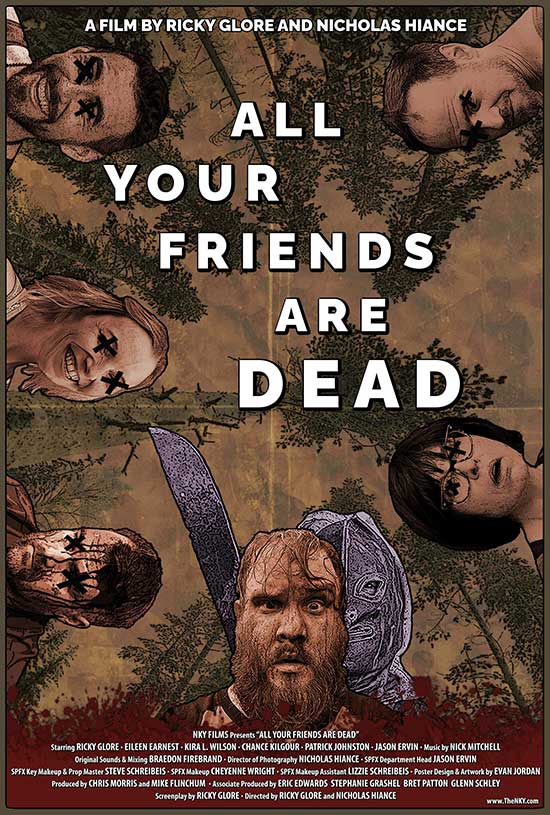 WHAT IF THE TEEN SLASHER FILM GREW UP?

As one of the characters in the upcoming indie horror film ALL YOUR FRIENDS ARE DEAD laments, “In movies starring middle aged people, if they die, they die from heart attacks, some rare blood disease, cancer, or diabetes. Not knives, machetes, or chainsaws. Nothing sexy like that.” Well, this movie is about to change all of that!

When 35-year-old Matt Wilbee looks at the current state of his life, he recognizes through depression that his best years may be far behind him. After making the drastic decision to end his life, he writes an email alerting the estranged, but once inseparable, high school friend group dubbed, “The Pack,” that he will be saying goodbye for good at the camping grounds they all had last seen one another at. Rushing to his side, Matt’s old friends arrive just in time at the campsite to save his life…but little do they know, a deranged masked killer is lurking in the woods, ready to pick them off one-by-one, and it’s their own lives they’ll have to start worrying about.

ALL YOUR FRIENDS ARE DEAD’s SPFX/Makeup Team has worked on beloved genre films like The Mutilator 2 (currently in production), Haunt (2019), Candy Corn (2019), NOTZILLA (2019), Terror Trips (2022), as well as Netflix’s Hillbilly Elegy (2020) and Northern Kentucky’s famed haunt THE USS NIGHTMARE.

ALL YOUR FRIENDS ARE DEAD will have its Cincinnati premiere at the Esquire Theater on August 25th.

For more information and to stay up to date on the film, visit www.TheNKY.com

All Your Friends Are Dead – Trailer from TheNKY on Vimeo.