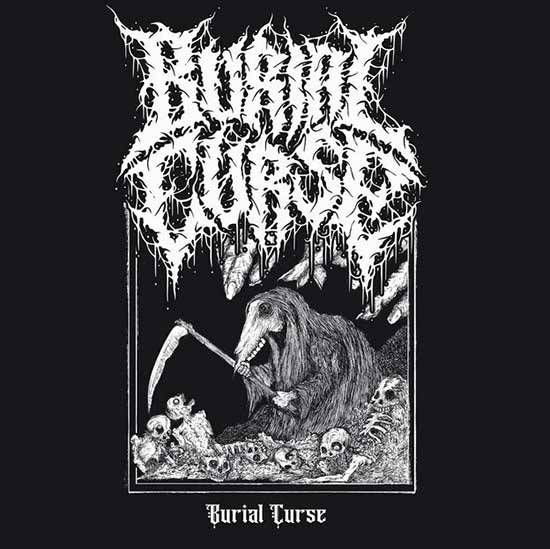 Dawnbreed Records is pleased to announce the official release of the self-titled debut EP of US blackened death metal act BURIAL CURSE, due out April 8th 2022 in CD and MC format (vinyl to follow later in the year).

Stream the track “Seeping Bile” at THIS LOCATION.

The very floor of the underground is a seething mass where, no matter where you look, you are almost guaranteed to be blindsided by a new name that’s just as vile as the last if not somehow even more so.

Bursting forth out of that very floor with an utterly barbaric sound that constantly goes for the throat and leaves naught but gore-splattered pools of blood in their wake, it’s BURIAL CURSE with their cavernous self-titled EP debut that is one of the newest bands to make a bid for your attention.

Not a single minute is wasted in these five tracks as BURIAL CURSE makes it their mission to truly devastate any unwary listeners who find themselves in their warpath that are destined to be demolished in a vicious and agonizing annihilation with the resulting album the very definition of success in that regard.

We never find ourselves in the midst of a shortage when it comes to bands in this exact corner of the underground, but it’s BURIAL CURSE that manages to rise above, stand out, and, most importantly, dominate.

Originally released by Famine Records on a cassette (100 copies), Dawnbreed is repressing this on Cass, CD and 12”.

The original recordings were lost, but we had Alex from Obscured By Evil Productions upgrading the sound and the result is even more vigorous, with that extra portion of smack and just even more over the top than the original.