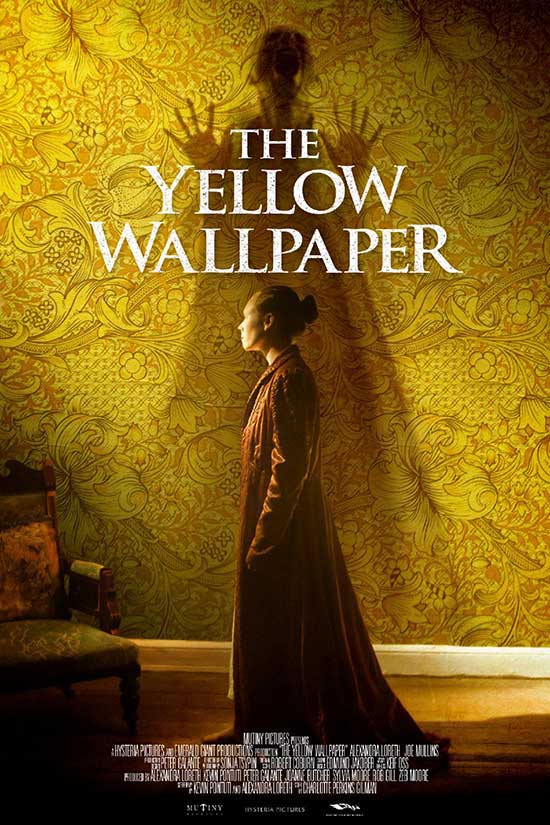 The debut film THE YELLOW WALLPAPER from creative duo—Alexandra Loreth and Kevin Pontuti—is a chilling and boldly original vision of madness. Jane, a writer and young mother, is prescribed a rest treatment by her physician husband John, who takes her to a remote country estate for the summer. She becomes obsessed with the peculiar yellow wallpaper in the bedroom he has chosen for her. In her isolation, she secretly writes about a woman trapped in the wallpaper—that she must free.
THE YELLOW WALLPAPER is a dark and disturbing contemporary adaptation of Charlotte Perkins Gilman’s well-known and controversial gothic feminist horror story about patriarchy and mental health. The film is a collaboration between partners Alexandra Loreth and Kevin Pontuti and stars Alexandra Loreth, Joe Mullins, Clara Hart, and Jeanne O’Connor. The film was written by Alexandra Loreth and Kevin Pontuti and directed by Pontuti. THE YELLOW WALLPAPER has a running time of 99 minutes and will not be rated by the MPAA. The film World Premiered at Cinequest followed by a successful festival run. Mutiny Pictures will release the film on March 29.
For more information, go to: www.yellowwallpaperfilm.com/
Social Media:
www.instagram.com/yellowwallpaperfilm/
www.facebook.com/YWPfilm
twitter.com/YWPfilm
Share