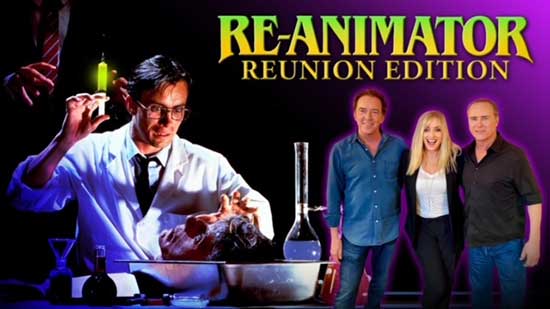 Producer Charles Band and director Stuart Gordon’s 1985 Empire Pictures classic RE-ANIMATOR is widely considered one of the greatest horror movies of all time. Now, we’re bringing RE-ANIMATOR home to the Full Moon mothership in all its gory glory, fully uncut and out of control with an all new special edition!

In RE-ANIMATOR: REUNION EDITION, Band invites original RE-ANIMATOR stars Barbara Crampton and Jeffrey Combs to sit with him in the studio and reflect on the film’s legacy as well as their nearly four decades of making movies together, including CASTLE FREAK, THE PIT AND THE PENDULUM, FROM BEYOND and more. It’s the full, unrated feature film attached to a funny, revealing and insightful one hour special that is a MUST SEE for all RE-ANIMATOR fans and a heartfelt tribute to the late, great Stuart Gordon.

RE-ANIMATOR: REUNION EDITION premieres THIS FRIDAY (3/4/22) exclusively on the Full Moon Features channel and app, with a premiere on Full Moon’s Amazon Prime channel arriving next week. Spread the word!

AND DON’T FORGET! Premiering NEXT FRIDAY (3/11/22) on Full Moon Features, RE-ANIMATOR’s Dr. Herbert West returns to his corpse reviving ways in the shocking new series BEYOND THE RESONATOR, the hotly anticipated sequel to the smash hit THE RESONATOR: MISKATONIC U! Subscribe today and don’t miss an episode!