Home | News | Trailer Premiere: Conor McMahon’s LET THE WRONG THE ONE IN Comes to Digital on 4/1

Trailer Premiere: Conor McMahon’s LET THE WRONG THE ONE IN Comes to Digital on 4/1 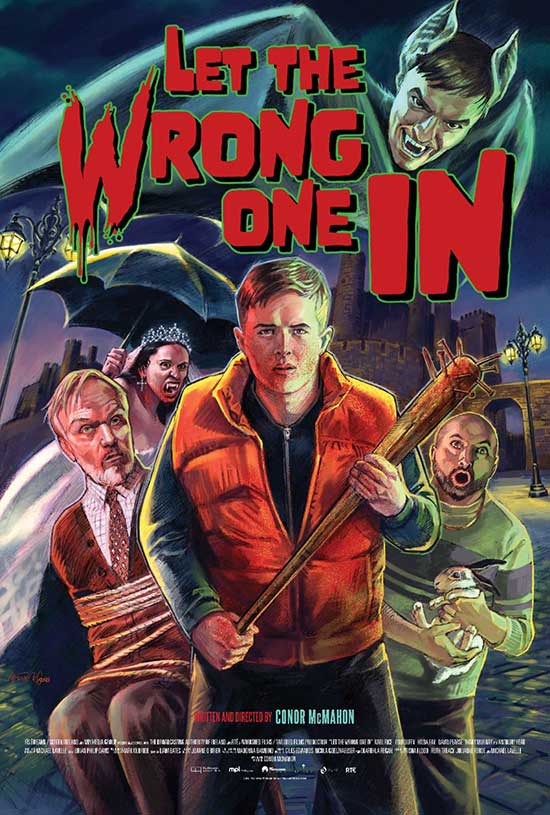 From The Director of Stitches and From The Dark Comes A Hilarious Horror-Comedy And Festival Hit — Just In Time for April Fool’s Day
LET THE WRONG ONE IN
A FILM BY CONOR MCMAHON
Starring Karl Rice, Eoin Duffy and
‘Buffy the Vampire Slayer’ Icon Anthony Head
In Select Theaters and on Digital April 1st
Let the Wrong One In follows young supermarket worker Matt, who is a little too nice for his own good. When he discovers that his older, estranged brother Deco has turned into a vampire, he’s faced with a dilemma: Will he risk his own life to help his sibling, with blood being thicker than water? Or will he stake him before he spreads the infection further?
Let The Wrong One In stars upcoming Irish talent KarlRice and Eoin Duffy, along with Buffy the Vampire Slayer icon Anthony Head, in the role of Henry; a taxi driver with a sideline in vampire hunting.
A raucous and hilarious horror-comedy from Irish filmmaker Conor McMahon, who previously made the genre festival hits Stitches and From the Dark, Let the Wrong One In takes vampire cinema into unruly new directions while also honoring its classic tropes and charms.
Let The Wrong One In is a co-production between Tailored Films (The Lodgers) and Workshed Films (From the Dark), and is financed by Screen Ireland, MPI Media Group, and The Broadcasting Authority of Ireland, in association with RTE.
Select talent will be available for interviews. If you’re interested in interviews, please contact myself and Stacey Cusack (stacey.cusack@sapkarpr.com).
LET THE WRONG ONE IN
In Theaters And On Digital April 1st
Written & Directed by: Conor McMahon
Produced by: Trisha Flood, Ruth Treacy, Julianne Forde and Michael Lavelle
Starring: Karl Rice, Eoin Duffy, Hilda Fay, David Pearse, Mary Murray, and Anthony Head
Country of Origin: Ireland
Language: English
Genre: Horror/Comedy
Distributor: Dark Sky Films
Run Time: 101 minutes
Share