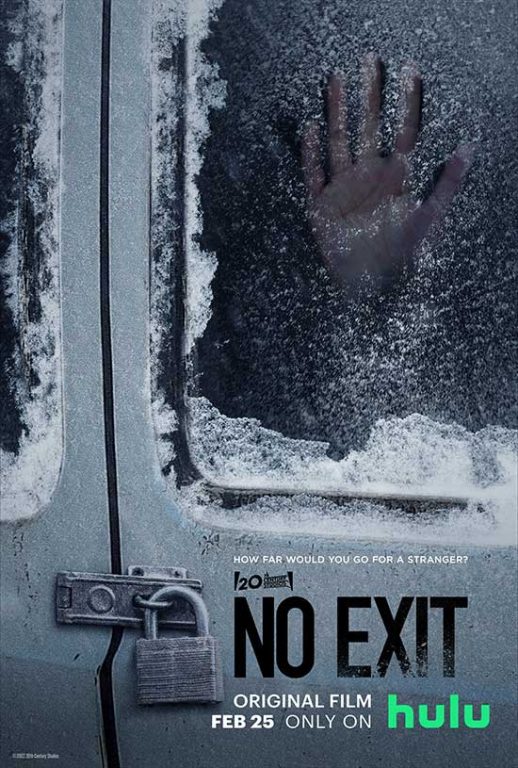 With characters stuck in a single location, movies like “The Thing”, “The Hateful Eight”, “The Mist”, “10 Cloverfield Lane”, “Friend of the World” and “The Lighthouse” come to mind. In Hulu’s latest horror drama “No Exit”, a college student discovers a kidnapped child hidden in a car belonging to one of the people inside an isolated highway rest stop during a blizzard.

David Rysdahl (“Nine Days”)
Dale Dickey (“Winter’s Bone”)
Mila Harris (“Young Dylan”)
FILMMAKERS:
Damien Power (“Killing Ground”) (Director)
Andrew Barrer & Gabriel Ferrari (“Ant-Man and the Wasp”) (Screenwriters)
Scott Frank (“The Queen’s Gambit”) (Producer)
In “No Exit”, a young woman en route to a family emergency becomes stranded by a blizzard and forced to find shelter at a highway rest area with a group of strangers. When she stumbles across an abducted girl in a van in the parking lot, it sets her on a terrifying life-or-death struggle to discover who among them is the kidnapper.
Directed by Damien Power (“Killing Ground”) from a screenplay by Andrew Barrer & Gabriel Ferrari (“Ant-Man and the Wasp”) based on Taylor Adams’ 2017 novel and produced by PGA Award winner Scott Frank (“The Queen’s Gambit”).
“No Exit” is available to stream on Hulu starting February 25th.
Share