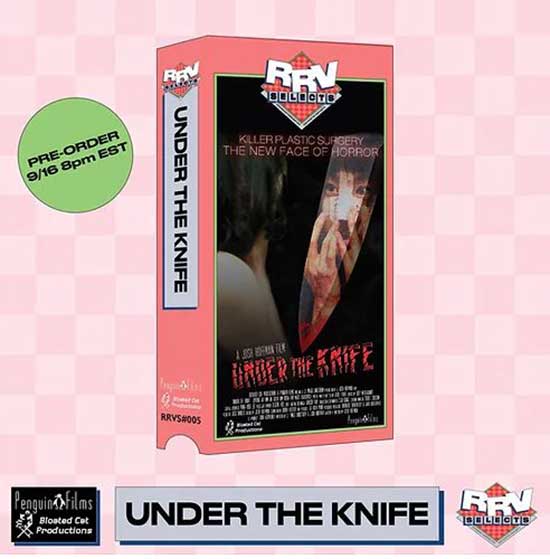 Bloated Cat Productions and Penguin Films have unleashed “The New Face of Horror.” UNDER THE KNIFE is a psychedelic journey into the vortex of vanity. “Beverly travels to South Korea to get plastic surgery, but ends up unknowingly getting a computerized implant from a surgeon who maniacally turns his patients into beautiful killing machines.” Prep for surgery. This film will get implanted in your head! Bloody deaths, exotic locations, atmospheric nightmares, and much more. Inspired by the fun vibe of 80’s American slashers and the hypnotic visual decadence of 70’s Italian giallo films. The soundtrack features K-pop, indie retro surf rock, and riveting house music. The themes of technology and social conditioning are explored in-depth and really resonate with current events. UNDER THE KNIFE is a thoughtful art film with retro slasher roots, painted with intense sequences depicting visually stunning mind control. You’re gonna wanna buckle up for the second half of this film. UNDER THE KNIFE was written and directed by Portland filmmaker Josh Hoffman (THE PHONE DEAD, 2019 and EYETANIC, 2020) and produced by Swedish producer J. Pingo Lindstrom (ANGRY, 2010 and THE WEREWOLF CULT CHRONICLES, 2005). This edgy English-language film was shot on location in South Korea, Japan and the US, and is the first South Korea/Sweden co-production. The majority of the post-production was done in Portland. Renowned Korean actor, Jin-geun Kim (ACACIA, 2003 and VOICES, 2007) stars as the deranged plastic surgeon, Dr. P. UNDER THE KNIFE World Premiered in the Forbidden Zone at the Yubari International Fantastic Film Festival 2018, Japan’s largest horror film festival. The North American Premiere was as the Closing Film for the Portland Underground Film Festival 2018, held in the historic Clinton Street Theater. The film then had its East Coast Premiere as a special event put on by the Korean American Film Festival New York in the Film Noir Cinema in Brooklyn. Pick up a Limited Edition VHS from RETRO RELEASE VIDEO or watch the film streaming on: TUBI, XUMO, PLEX, VIMEO ON DEMAND and TROMA NOW. More streaming options coming soon.  Limited Edition VHS www.retroreleasehomevideo.com/product-page/under-the-knife-dir-josh-hoffman-pre-order  TUBI tubitv.com/movies/633162